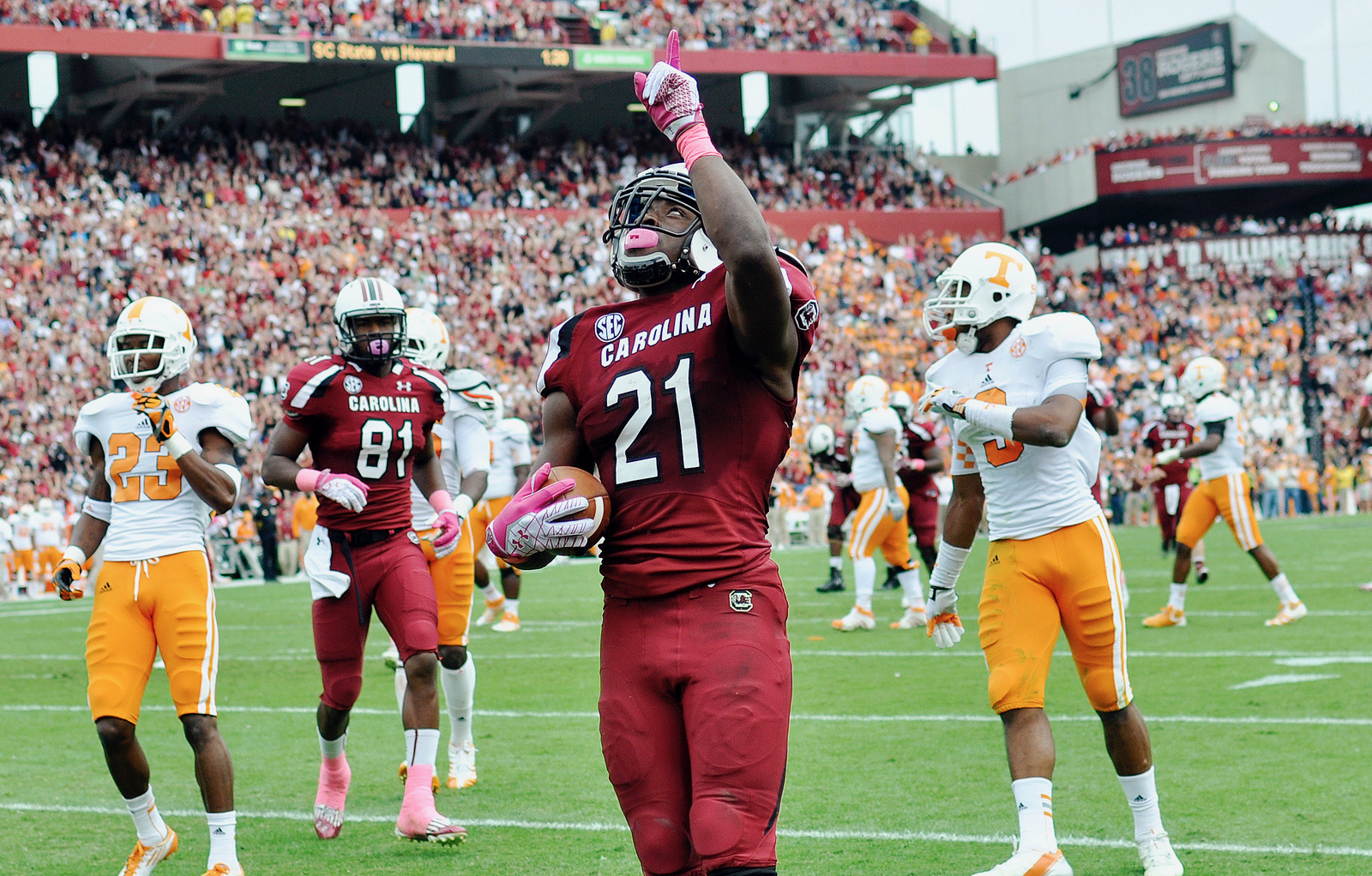 Marcus Lattimore — the much beloved running back who played for the University of South Carolina from 2010-2012 — recently spoke up about Georgia’s black senatorial candidate Herschel Walker, stating he is “hermetically sealed in whiteness” and that “white people have been kissing his ass for forty years.”

Lattimore went on to say about his personal experiences, “When you’re in their circle, going to their parties, invited over to their house, hanging out with their children, embracing their constructed version of Christianity, attending big wig fundraisers; you start to dress like them, talk like them, walk like them.”

“Unconsciously you start to wipe any trace of your heritage. They validate and confirm your identity as one of them. The laws of human nature take over, and just like a spell, you’re hypnotized conforming to their ways. In a sense, you become white. Until you’re not. This was my life from 2007 – 2020.”

I find this new topic of “cultural heritage” fascinating. Cultural appropriation, cultural identity, cultural dress, culture-based acting roles — everyone now is defined by their racial roots or geographic origin, however distant they may be.

The culture that seems to be completely ignored is “American culture.”

What is American culture? It’s a melting-pot culture of hard work, self-improvement and the pursuit of success.

I will note that I, for one, have failed to engage in much of that, but perhaps that’s why there’s no ass kissing for me. I own that.

That said, perhaps the reason “white people” admire Mr. Lattimore (above) and Mr. Walker is because … anyone? Anyone? How about this radical thought: They focused on a goal, worked their asses off, sought self-improvement and succeeded.

Contrary to Woke belief, educated white people aren’t entirely stupid. We know that black Americans must surmount great challenges to achieve great success. It’s a hell of a lot easier in 2022, but there are still a lot of racists in the country who want to suppress black success: White trash and white failures don’t want anyone black outperforming them … it gives them someone to look down on.

When a black person achieves success, educated white people — like the ones that apparently Mr. Lattimore no longer wants to be around — know damn well how hard they worked, and “human nature” is to be complimentary of that success. His circle of white friends no doubt initially gravitated to him because of his celebrity status, then found they really liked him as person, not just a star football player.

Part of the culture of success is a willingness to meld with other successful people in your field … it demands, in the words of Mr. Lattimore, a willingness “to dress, walk, and talk” like those in the circle you wish to be a part of … regardless of your personal “heritage.”

I can’t speak for you, but if I run into my physician on his way to his car, I want to see him dressed in some sort of traditional white-collar attire. Should I care? No. But he watches over my health, and I like the idea of him being a buttoned-up strait-laced guy.


Ask yourself these questions: Do you not “play a role” to become and remain a success in mainstream America? Do you not dress in accordance with your corporation’s standards, stay current on relevant things you’re colleagues might be discussing, and assimilate into the overall culture success? Feel free to refer to “mainstream America” as “White America,” but please check with the millions of very successful mainstream black Americans before you do.

The answer, of course is that—unless you’re an entrepreneur—assimilation is needed. It’s demanded in every culture in every country in the world… and not just in coat and tie jobs. If you work at Facebook in Silicon Valley, wearing a Searsucker suit and bowtie would not go over well… to succeed, you’d dress casually, no matter how deep your Southern roots and heritage go.

A particularly confusing thing Mr. Lattimore said was, “The laws of human nature take over, and just like a spell, you’re hypnotized conforming to their ways.”

What “ways” is he referring to? I assume he’s not alleging racism, because he wouldn’t be invited to family functions by racists, so what is it? That these successful people enjoyed his company because they admired him? Included him? Made him feel SO comfortable about being a successful man—not a Black man—that he felt like he was one of them?

Is he insinuating kindness, hospitality, respect, and inclusion are not a part of his “heritage?” It’s certainly been the heritage of the black people I’ve spent time around.

The woke among us will no doubt seethe that these white hosts weren’t really his friends. But doesn’t 2007-2020 seems like a long time to include someone in your inner circle that you don’t like or respect? Especially since his football career and time in the limelight ended in 2012? Then, there’s the whine that “these whites” harbored racism in their hearts. Since CRT says all whites are racist, isn’t breaking bread and spending time together a good start to ending that?

Mr. Lattimore’s perspective would be far more understandable to me if he’d been “discarded” by the white community after he was injured. But he wasn’t. If he was injured in 2012, his fame should’ve lingered only a couple years, as he had no real professional career to follow and cheer on … so after a couple years of parties and family functions, he’d would’ve faded into obscurity.

It sounds to me like a hell of a lot of people liked him … for who he is. One can tell from his writing that he’s smart as hell, and probably a fascinating guy to talk to. He said, “things changed after George Floyd’s murder.” I’m sure it did. He entered a new reality: Instead of a tiny group of white people “kissing his ass,” 50 percent of the white American population began kissing his ass.

Part of that white liberal ass-kissing, however, will come with a price.

“Uh, hey Marcus… we need you to go back and act, uh, more oppressed. Maybe, umm, dress and talk and walk more ‘Black.’ We can’t feel sorry for you if the man isn’t keeping you down. We need you excluded from those white events, because — if you attend — it shows a growing connection between Black and white Americans. If that happens, what will all us white saviors do to make ourselves feel we’re better than conservatives?”

I wish nothing but the best for Mr. Lattimore, who is now living in lily-white, uber-woke Portland, a city with a black population of 2.7 percent.  It makes me sad he believes he sold out his black heritage by hanging around white people who, by all appearances, liked him … and enjoyed his company enough to have him hang around their house and influence their kids. I hope that his return to the “black way” of walking, talking, and dressing fills the newly carved hole in his heart.

I sure he’ll do just fine, but I also think his old friends will miss him. If I had any advice, it would be this: Prepare for a new form of ass kissing, from Portland’s white liberals who will tell you they want to be your friend, and invite you to their parties, and fund-raisers, and into their homes. It will be a little different though — that kindness will have nothing to do with your amazing accomplishments or intelligence or friendliness… it will be because you’re black.

”I am afraid that there is a certain class of race-problem solvers who don’t want the patient to get well, because as long as the disease holds out they have not only an easy means of making a living, but also an easy medium through which to make themselves prominent before the public.” — Booker T. Washington