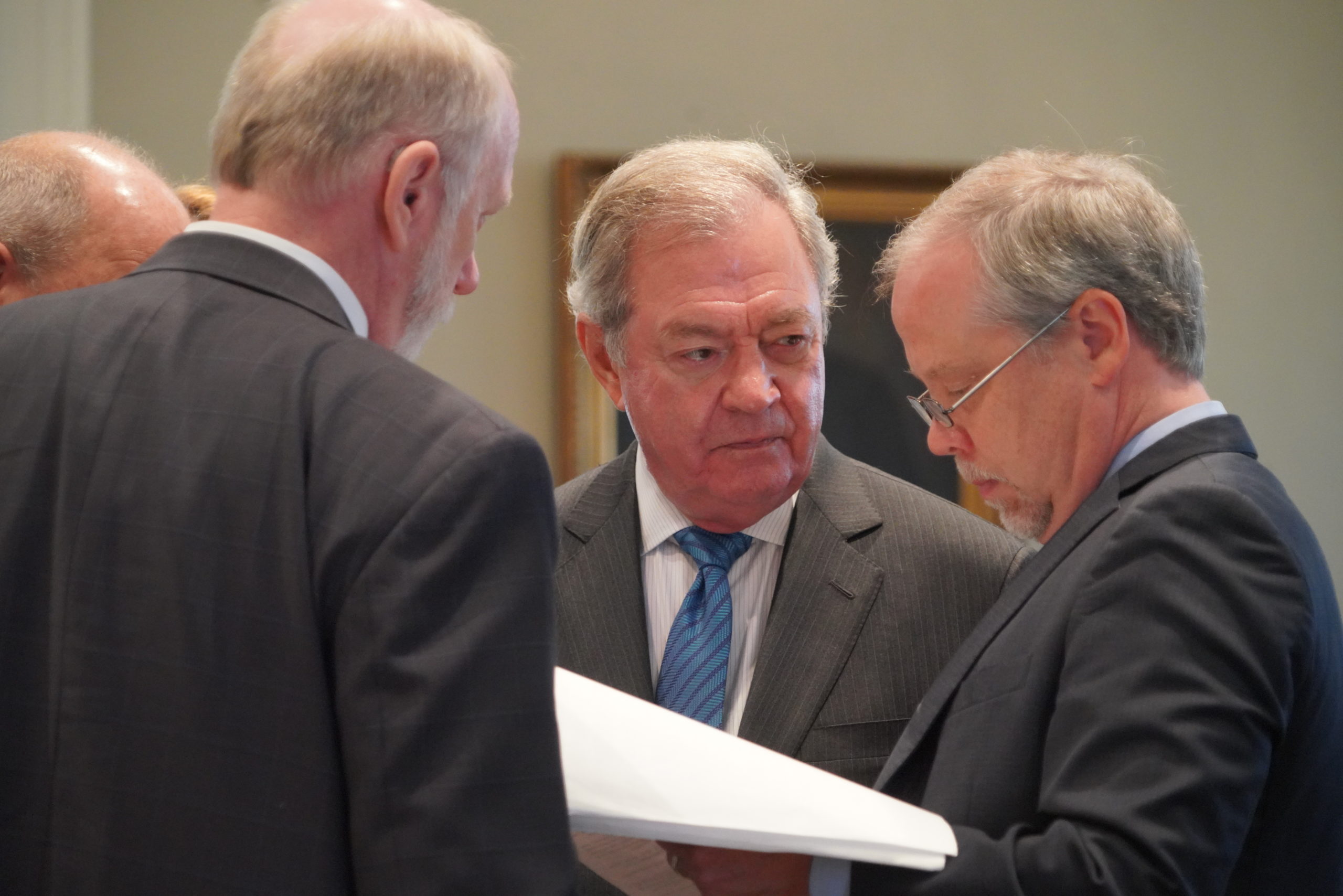 The most hilarious thing about “government transparency” in South Carolina — and trust me, there’s a lot to laugh at with this one — is when you realize the candidate for office with whom you’re speaking (or the elected leader or the publicly paid employee) actually believes they’re cool like that.

“In this office, we believe in transpar–“

“Our agency is transpar—“

“This department has nothing to hide—“

Then why are you hiding in that bush, sir?

Some public officials love to claim they’re transparent using the same “hopes and dreams” slobber of a person who is trying to manifest a better personality by reciting “I‘m not a jerk” in the mirror before bedtime.

I truly believe they want to be the kind of people who conduct public business in public, but when the time comes to prove it, the expediency of — and refreshing lack of scrutiny from — operating in the shadows is far too sexy for them to resist.

And it’s so disappointing to watch them succumb to that temptation and then whine about being criticized for it.

The General Assembly finds that it is vital in a democratic society that public business be performed in an open and public manner so that citizens shall be advised of the performance of public officials and of the decisions that are reached in public activity and in the formulation of public policy. Toward this end, provisions of this chapter must be construed so as to make it possible for citizens, or their representatives, to learn and report fully the activities of their public officials at a minimum cost or delay to the persons seeking access to public documents or meetings.

In twenty years of living in this state, I’ve yet to visit this Public Garden of the Gods that our legislators are describing here. It sounds so civilized and ethical … not to mention ironic when you consider the S.C. General Assembly is exempt from the Palmetto State’s Freedom of Information Act (FOIA) law.

That’s right … they wrote themselves out of the law.

By the way, this is a particularly ridiculous notion when you consider that we are a state in which a county clerk of court’s office (why am I holding back? It was Colleton County) charges $3.00 per page to email copies of motions from a case.

And this is digital! These are nonexistent “air” pages that don’t require redaction (unless they’re dealing with a minor).

The documents filed so far in the Alex Murdaugh murder case are already more expensive than downloading five bestselling murder-mysteries onto my Kindle.

Now, I grant you, Dick Harpootlian is a decent writer — and this case is far darker and has more plot twists than a Tana French novel — but still, that is not “open government.” That is more like grossly profiting off your statutory obligation to provide public records or, even worse, trying to discourage people from asking for the public records out of fear of the price tag.

Speaking of Murdaugh, Harpootlian and “court” …

Almost two weeks ago, state prosecutor Creighton Waters and Harpootlian told Judge Clifton Newman that a gag order was necessary in this case to prevent anyone from leaking the facts of the case (i.e., what evidence the state thinks it has) and to maintain the integrity of the jury pool by not further impugning Murdaugh’s character.

Right as Harpootlian was arguing that failing to seal the motions would ”pollute” the jury pool, grocery store shoppers all across America were like, “I think Alex Murdaugh just winked at me from the cover of People magazine.” All while waiting for a phone notification for when the next 20/20 episode on the Murdaugh family airs.

Newman, to his credit, was reluctant to indulge the “prosecu-fense” (“defe-scutors?”) to the fullest extent of their request but instructed Harpootlian to draw up the paperwork anyway.

For almost two weeks now, FITSNews has attempted to ascertain each day whether any motions for a gag order have been filed in this case – or whether Newman signed any order restricting the public’s access to information in the case.

The answer: Wouldn’t it have been nice to get a definitive one!

Real quick, here’s what the state constitution says about how courtrooms are supposed to run …

All courts shall be public, and every person shall have speedy remedy therein for wrongs sustained.

It’s a word that I’m sure prompts a healthy chuckle from Harpootlian as he’s slowly closing the door behind him after entering judges’ chambers and prosecutors’ offices — while making extreme eye contact with those left in the hall, right up until the door clicks shut …

… which is what he seems to be doing in this case so far.

And the state Attorney General’s Office appears to be letting him do it despite knowing full well the Murdaughs’ reputation for taking every attempt at holding them accountable and twisting them into adorable little balloon animals that they then hand out as take-home gifts to anyone making the super silly mistake of thinking that justice is equally pursued in the 14th Circuit.

I say the AG’s Office “appears to be doing this” because all I can do is take a guess at it. Why? Because surprise, surprise they’re negotiating the terms of this psycho-thriller of a gag order in the dark, where the monsters like to hang out.

According to an attorney familiar with the situation, Harpootlian has, in fact, written a draft of an order — and presumably an accompanying motion — addressing the issue of how pre-trial matters will be handled in the Murdaugh murder case.

The AG’s office apparently has a copy of this draft and has been negotiating the terms.

But shhhhhhh! It’s a secret! Nobody tell anyone! OMG.

The negotiation and discussion surrounding the question of what court business should be public and what should be sealed is happening in private.

So we have no idea how hard the AG’s Office is fighting — or even IF they’re fighting — for terms that would serve the public’s best interest.

The fact that these conversations aren’t happening in public has created an irony so thick you could cut it with the knife Murdaugh allegedly used to puncture his run-flat tires whilst pretending to be “shot at” by a potential mystery killer last September.

Wait! That knife is in evidence. Harpootlian is going to have to cut the irony for us after he’s done slicing whatever it is he’s been feeding the AG’s Office.

Now, the AG’s Office isn’t going to like this characterization one bit, I’d imagine.

To their minds, I’m sure they believe they were simply abiding by the rules of professional conduct when they skipped a press conference to announce the murder indictment against Murdaugh and when they decided not to share with the rest of the class — even in the most general of terms — why they believe Murdaugh killed his wife and son.

But here’s what that rule says. It’s Rule 3.8 “Special Responsibilities of a Prosecutor”:

[E]xcept for statements that are necessary to inform the public of the nature and extent of the prosecutor’s action and that serve a legitimate law enforcement purpose, refrain from making extrajudicial comments that have a substantial likelihood of heightening public condemnation of the accused and exercise reasonable care to prevent investigators, law enforcement personnel, employees or other persons assisting or associated with the prosecutor in a criminal case from making an extrajudicial statement that the prosecutor would be prohibited from making under Rule 3.6 or this Rule.

Rule 3.6, as it were, acknowledges that the public has a “legitimate interest in the conduct of judicial proceedings, particularly in matters of general public concern.”

One certainly could argue that there’s “general public concern” in making sure that a separate justice system isn’t being “purchased” by those who can afford to hire judge-appointing lawyer-legislators.

According to Rule 3.8, the AG”s Office is allowed to tell us the nature and extent of their actions — presumably this would include information about why someone is being charged with double-murder, as well as discussion about what a gag order in the case should include.

One could even argue that there’s a legitimate law enforcement purpose in not allowing Murdaugh’s defense team to further chip away at the public’s trust by filling the information void with accusations that the AG’s Office and the South Carolina Law Enforcement Division are incompetent and corrupt.

Did they arrest Murdaugh because they couldn’t find any other suspect? Are the “real killer or killers” — as Harpootlian calls them — still out there?

The point is: the prosecution and everyone involved in the investigation are already barred from making extrajudicial statements that could heighten public condemnation of Murdaugh. So is a gag order even the right remedy here? Can’t we already count on the AG’s Office to be circumspect?

Also, not for nothing, but to heighten public condemnation of Alex Murdaugh past current levels, the AG’s Office would have to create a streaming network, make it more popular than Netflix, HBOMax and Hulu and then spend 14 months filming a docu-series titled “Alex Murdaugh? Yuck!”

But no one is suggesting they do anything remotely akin to that.

This is one of the most consequential cases in the history of our state when it comes to the public’s faith in the judicial system.

So it shouldn’t be asking too much that public matters get discussed publicly — especially when you’re considering cutting the public out altogether.

Anything less than this should be considered a joke.