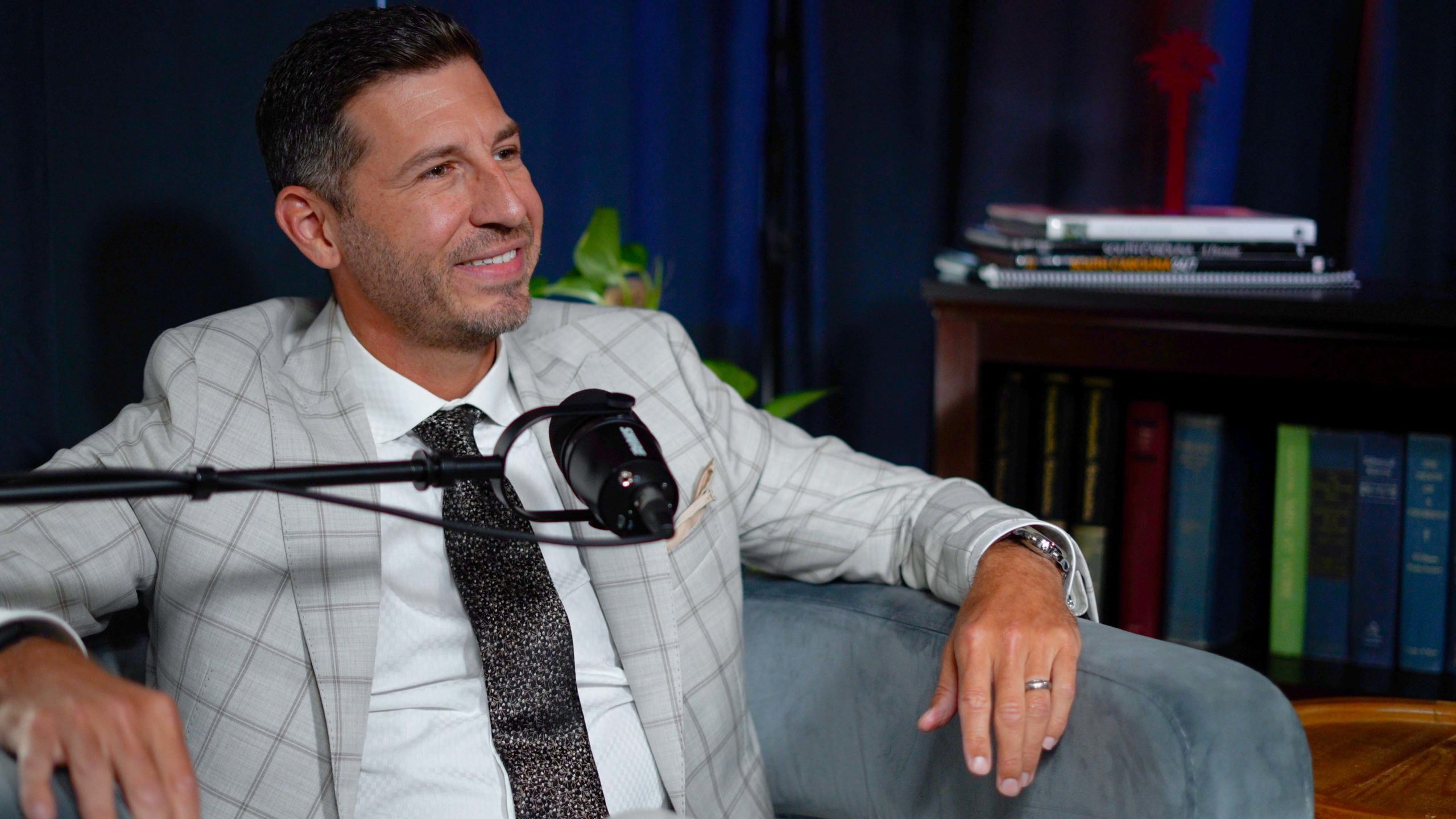 The term “pimped” gets thrown around a lot in our parlance. “Pimp threads.” “Pimp my ride.” “That’s so pimp.” But like so many of the words people use (ahem, “conservative”), “pimped” is in danger of being debased – of losing its meaning.

When you dress the way Wes Donehue dresses, though … the shoe (a Geechie Gullah-style basket-weaved loafer, in case you were wondering) “fits.”

Donehue – the wildly successful political strategist/ corporate communicator – paid a visit to the FITSNews studio on Wednesday to talk about his new book, Under Fire, a reputation management, crisis communications handbook based on his podcast of the same name.

Donehue rolled into our offices bedecked in a pattern plaid suit and “signature” fitted shirt with silver rhinoceros cufflinks, people.

Yeah … forget the fourth generation frat boy monogram, this guy has his own signature sewn into his clothes.

Seriously … get rid of those Geechie-Gullah loafers and give my man some aquarium shoes (and socks) and I might as well have been interviewing Flyguy from the 1988 cult classic I’m Gonna Get You Sucka.

Oh, and Donehue’s cufflinks had a story … because what’s the point of wearing cufflinks if they don’t have a story?

Donehue and I go way back – and not always in a good way. The “knife fighter” and I battled against each other in numerous political scrapes dating back to the late 2000s – giving as well as we got. Over the years, though, I have developed a grudging respect for him.

Four years ago, I penned this story on Donehue – highlighting his rise from the wrong side of the tracks in Goose Creek, S.C. to a seat at the table among the bow-tied elite of the Palmetto political world.

“Had Donehue been like most South Carolina kids raised in his particular environment, he would be living in a mobile home huffing it at 2-3 minimum wage jobs right about now … stacking boxes, taking orders, sweeping floors,” I wrote.

Unlike a lot of Palmetto political operatives, though, Donehue wasn’t content to be a big fish in a small pond. Nor was he content to keep trudging along doing comparatively low-paying political work. So when an opportunity presented itself on the national stage – in the corporate arena – he seized it.

In 2013, CNN released a documentary entitled “Blackfish” which chronicled the 2010 death of Dawn Brancheau, a SeaWorld trainer who was killed by a 12,500-pound orca (a.k.a. “killer whale”) named Tilikum. The documentary assailed SeaWorld for its practice of using captive orcas for entertainment – unleashing a cancel culture campaign against the company that damaged its reputation and drove down attendance at its parks.

Donehue and his team developed a multi-pronged response that addressed the film’s inaccuracies while at the same time highlighting SeaWorld’s animal rescue and rehabilitation work.


Now the 42-year-old wants to take lessons learned from that fight – and cancel campaigns from his own personal experiences – to guide others through similar trials and tribulations.

One of the firm’s former clients? Greg Parker, the CEO of Parker’s Kitchen gas stations. Regular readers of this news outlet will recall Parker’s is at the center of a high-profile wrongful death lawsuit filed by the family of Mallory Beach – the victim of a 2019 boat crash that thrust the powerful Murdaugh family onto the statewide stage.

To recap: The late Paul Murdaugh (who along with his mother Maggie Murdaugh was murdered at Moselle last June) crashed his father Alex Murdaugh’s 17-foot, center console Sea Hunt fishing boat into a piling near the Archer’s Creek Bridge outside of Parris Island, S.C. shortly after 2:00 a.m. EDT on February 24, 2019.

Murdaugh was 19 years old at the time.

Weeks after the crash, Paul Murdaugh was charged with three counts of boating under the influence – for which he was staring down a lengthy prison sentence. He was murdered before he could stand trial, though. Meanwhile, his father was mixed up in an obstruction of justice investigation stemming from his alleged actions in the aftermath of the incident.

On the civil side, Mark Tinsley – the Beach family’s attorney – sued multiple parties in the aftermath of the boat crash, including Alex Murdaugh, his son Buster Murdaugh and Parker’s, one of the locations which sold alcohol to an underage Paul Murdaugh prior to the crash.

Due to his work for Parker’s, Donehue (above) has found himself squarely at the center of the Beach lawsuit. Questions have been raised as to the sort of work he did for the convenience store executive – and whether it may have included some substantially less-than-savory leaks of information related to Mallory Beach.

As our executive editor Liz Farrell recently reported, the Beach family has alleged that Parker and his attorneys leaked photos of Mallory’s dead body – as well as other confidential court materials – to reporter Vicky Ward.

Parker and Ward vehemently deny this, but Tinsley and his co-counsel both say Ward admitted this arrangement to them last year.

The photos and materials in question were used in a video trailer that was posted publicly to promote Ward’s documentary “The Murdaugh Mysteries.” Ward says the video was posted online by mistake and was only meant to be shown to a handful of people connected to the project.

During his interview with me, Donehue declined to discuss the work he and his firm did for Parker’s – citing the advice of his attorney, S.C. senator Sandy Senn. However, he then proceeded to discuss it in some detail anyway. In so doing, he issued a blanket – and passionate – denial regarding allegations that he leaked images or video footage of Mallory Beach’s body.

Donehue also had some less-than-flattering things to say about Parker … who was the focus of this scathing column from me last December.

I hope you enjoyed this conversation … and stay tuned for more exclusive interviews on FITSNews. Also, if you want to purchase a copy of Donehue’s book, click here.