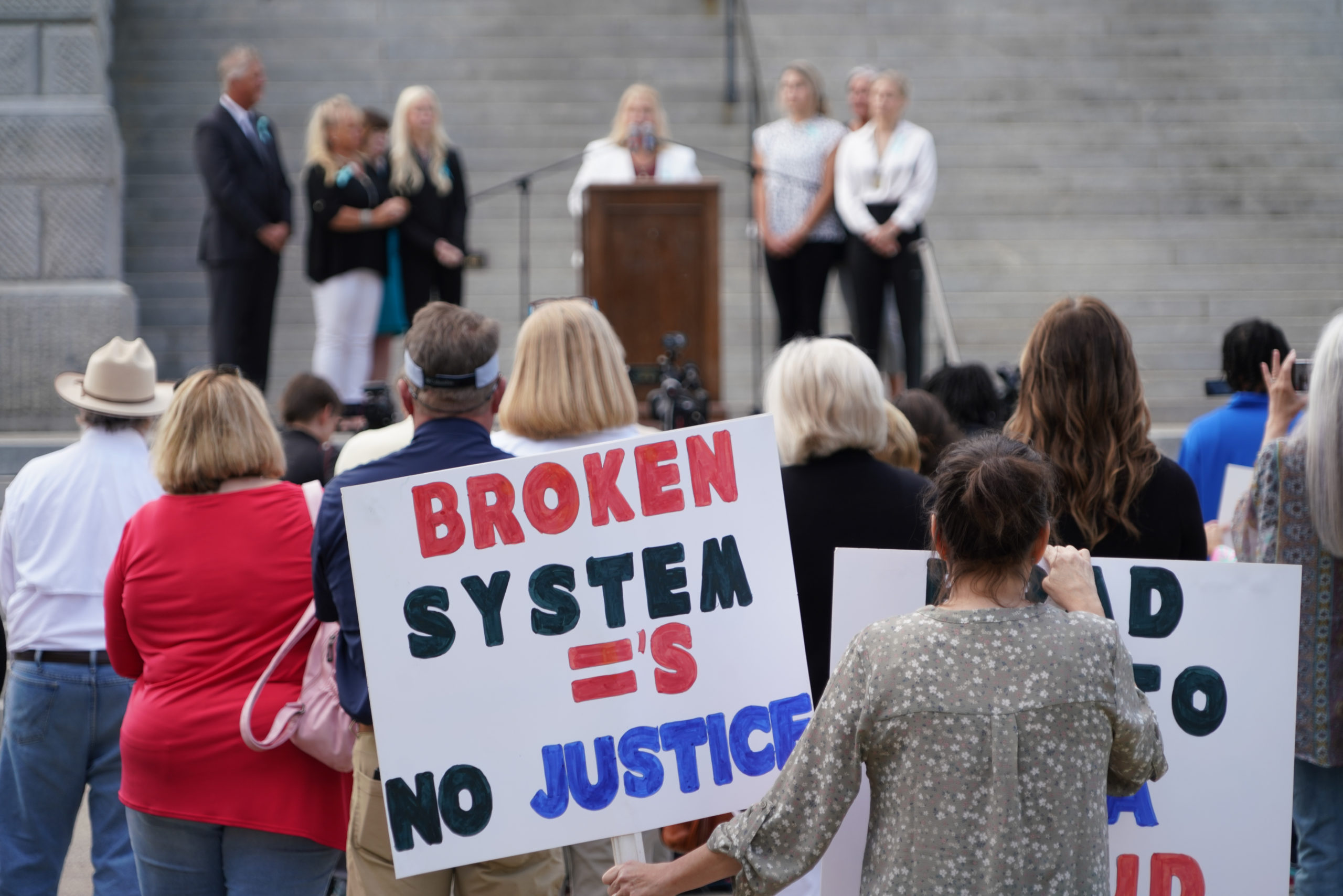 The rally took place on the south steps of the S.C. State House – a place where “Republicans” and Democrats have conspired for years to elect judges who cater to powerful lawyer-legislators and their clients.

“We are here today in front of the State House to encourage our legislators to hear from people who have been victims and who have also been re-victimized by our system,” said attorney Sarah Ford, one of the leaders of a reenergized victims’ rights movement in South Carolina.

Ford has been a relentless advocate in the Turner saga, which has become a case study for the myriad of ways South Carolina fails victims of sexual assault and other violent crimes.

Turner controversially received probation last month after pleading guilty to simple assault in connection with his June 2019 arrest on the charge of criminal sexual conduct in the first degree. Despite the 2019 charge being the third sexual assault charge leveled against Turner in a period of less than two years, he didn’t even have to register as a sex offender.

While awaiting the outcome of this appeal, however, Turner was arrested in his hometown of Orangeburg, S.C. on Monday and charged with public disorderly conduct. He remains incarcerated as he awaits a hearing next month regarding the possible revocation of his probationary status.

Turner’s case has exposed multiple systemic flaws in South Carolina: The corrupt method of judicial appointment, the deference shown to powerful legislators (who do the appointing), unconscionably lenient bonds/ sentences from “woke” judges, a docket that moves at the speed of molasses – and a galling lack of transparency over the whole process.

The case has also revived interest in the Palmetto State’s controversial ankle monitoring program, which appears to feature precious little in the way of monitoring. After being repeatedly released on bond, Turner habitually violated the conditions of his house arrest — paying visits to golf courses, shopping centers, restaurants and various private residences. He even left the state last December.

“Come to find out the ones doing the monitoring are actually profiting from those who are being monitored,” said Dr. Darren Bess. “Who came up with this system? I am supposing the same geniuses who came up with the way we appoint judges here in South Carolina.”

“Citizens of South Carolina should be concerned for their safety,” Bess added. “Profit, power and positional appointments seem to take front seat over the rights of victims and their families – and the citizenry is just left to thumb for a ride.”

Bess (above) spoke at the rally, too – passionately calling out how the state “re-victimized” her during the aftermath of the assault she endured at Turner’s hands.

“I put my faith in a system to help me and I believed (it) would,” she said. “Instead, it completely failed me.”

“When are things going to change?” Bess asked. “Why do these people keep getting away with making excuses for criminals? Who is not doing their job? And why do they still hold power?”

Those are all excellent questions, people …

Arguably the most compelling moment of the rally came when Brette Tabatabai – the elder sister of Turner’s alleged October 2018 rape victim, Dallas Stoller – took the podium.

Stoller, readers will recall, took her life last fall after being subjected to relentless bullying from Turner supporters who stalked and harassed her both on- and offline. Tabatabai and the rest of her family were dealt another blow last month when the office of S.C. second circuit solicitor Bill Weeks decided not to prosecute Turner in connection with Dallas’ case.

Overcome by the emotion of the moment, Tabatabai took a moment to collect herself as she prepared to address the crowd. Once she started speaking, though, it was on.

“For three years after (the) attack, Dallas suffered severe mental anguish, not only from the trauma of her assault, but the trauma of being relentlessly bulled by peers and adults in the community … the trauma of a system that repeatedly failed her over and over again, a system that has bred generations of women to believe that their voice and their story doesn’t matter,” Tabatabai said.

“They silenced her – as they have countless other victims,” Tabatabai said, referring to her late sister. “So what do we do when the oppressors are the very leaders who are supposed to protect these girls and these women? And our victims? Who are supposed to fight for them?”

“We make noise,” Tabatabai said, answering her own interrogatory. “And we don’t stop until we are heard.”

Tabatabai concluded her remarks with a challenge to solicitor Weeks – urging him in no uncertain terms to do the right thing in Dallas’ case.

“Bill Weeks, your move,” Tabatabai said in what amounted to a mic-drop moment.

Hutto gained infamy back in 2019 when he slut-shamed Bess during a court hearing in Orangeburg. This news outlet has reached out to Hutto on multiple occasions during the course of this saga. He has not responded once.

Shealy vowed to do “whatever it takes” to enact real reform during the 2023-2024 session of the S.C. General Assembly – which convenes next January. Let’s hope Shealy is as good as her word – and that she is successful in rallying more of her colleagues to back real reform.

This news outlet has steadfastly challenged the Palmetto State’s corrupt method of appointing judges. I have also called out the judges individually for their ongoing accommodation of violent criminals – whether in the bonds doled out, the sentences administered or in the system’s utter failure to move cases.

As I have repeatedly noted, state lawmakers are exclusively responsible for this systemic failure. And they are the only ones who can fix it. But make no mistake … it is going to take more than half-measures.

It is going to take structural, systemic change … powered by the sheer will of advocates like those who assembled in Columbia today.