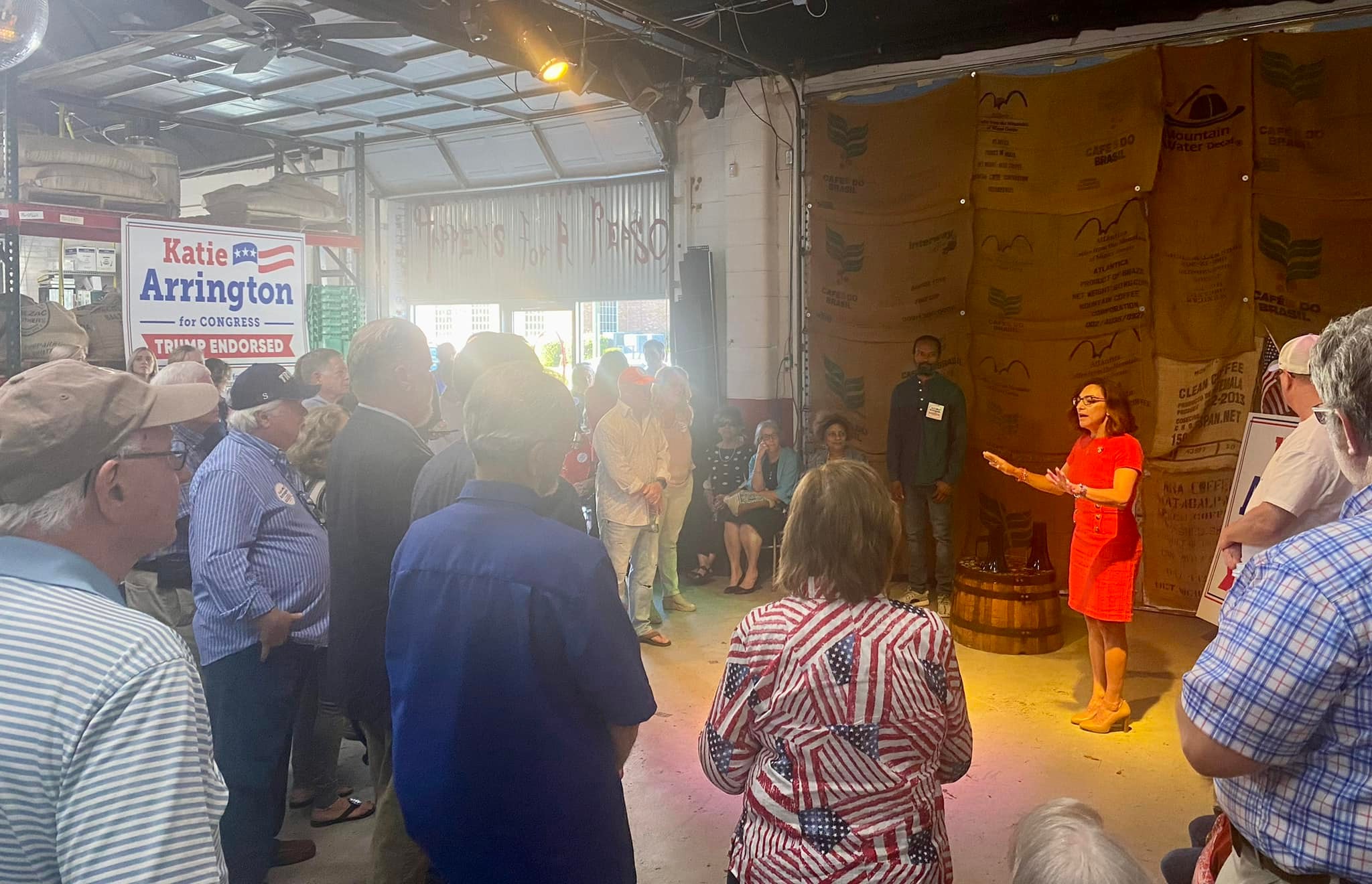 South Carolina’s Republican primary election for the first congressional district – which includes Charleston, Beaufort, Bluffton and other parts of the picturesque Palmetto Lowcountry – has officially gone off the rails, people.

And believe it or not, the latest drama comes after one of the candidates was accused of worshipping Satan and attempting to mow down her former husband with a vehicle … and after the other was heckled by a group of GOP women in southern Beaufort County.

The battle between incumbent freshman congresswoman Nancy Mace and former state representative Katie Arrington is more than just a proxy war between the GOP establishment (which has rallied to Mace) and former U.S. president Donald Trump (who has endorsed Arrington).

It is unadulterated hatred – dating back to when these two women served together in the S.C. House of Representatives four years ago and reportedly had to be separated during one particularly contentious exchange.

Why would anyone want to wade into this race? Good question …

The latest drama? The ongoing escalation of an issue both candidates were supposed to agree on: Marijuana policy.

Last week, Mace attended what reporter Caitlin Bird of The (Columbia, S.C.) State newspaper referred to as a “pot conference” in Miami, Florida.

The event in question was actually a cannabis capital conference – focusing on the financial side of this rapidly expanding industry (one which South Carolina has yet to tap into).

Mace has been a leader in this battle, sponsoring legislation which would remove cannabis from the federal government’s listed of Schedule I substances “in a manner consistent with the rights of states to determine what level of cannabis reform each state already has, or not.”

At the state level, Mace (above) has also been a staunch supporter of S. 150 – dubbed the “Compassionate Care Act” by its supporters. This bill – sponsored by S.C. senator Tom Davis of Beaufort, S.C. – would create a heavily regulated medical marijuana program in the Palmetto State, one in which pharmacists would oversee the distribution of cannabis to select patients based upon the recommendation of their physician.

I thought Arrington supported cannabis legalization. In fact, earlier this month she was criticizing Mace for not consistently supporting legalization at the federal level.

“While residents of the Lowcountry continue to be crushed by skyrocketing inflation and record high gas prices, Nancy Mace opted to spend 4/20 at a pot conference in Miami rather than with her constituents,” Arrington’s campaign said in a statement.

Arrington proceeded to cite a recent article in The Huffington Post in which Mace seemingly implied she was a recreational user of marijuana.

According to Arrington, Mace may have been “high” while serving in congress and should “take a drug test” to ensure she was complying with the terms of her congressional security clearance. Arrington also challenged Mace to reveal who paid for her trip to Miami.


Mace’s response? Her campaign challenged Arrington to take a lie detector test related to allegations she leaked classified information while working as a cybersecurity expert for the U.S. Department of Defense (DOD). Arrington has steadfastly denied this charge.

On Monday, Arrington agreed to “take a lie detector test to once and for all stop the slanderous lies Nancy is spewing about me.” In fact, she proposed “Nancy and I take our tests together.”

“My calendar is open, and Nancy knows where to find me,” Arrington said. “I’ll even pay for both of our tests!”

She also blasted Mace for responding “in true swamp fashion by declining to answer the question at hand.”

“It’s quite disheartening to see just how deep the swamps hooks in Nancy Mace are,” Arrington said. “I made two straightforward asks: Disclose who paid for her trip – whether it be the taxpayers or a special interest group (and) take a drug test and make the results public, so voters can understand if her personal use is the driving force behind her obsession with the drug.”

Arrington went on to speculate that Mace’s refusal to take a drug test was an effort to “buy time” so her alleged drug “usage (would) not register on a hair test.”

Sheesh … where to even begin in unpacking all of this drama?

First of all, I like both Mace and Arrington. I do not always agree with them, but I’ve always considered both women to be friends (even when I have been compelled to criticize them). And for the most part, both candidates have taken such criticism in stride.

Also, in the interest of full disclosure, Mace was affiliated with FITSNews years ago – an interest she severed when she decided to run for the U.S. Senate in 2014. As for Arrington, I supported her successful 2018 GOP primary bid against incumbent congressman Mark Sanford – one of the biggest upsets in Palmetto political history.

I backed Arrington in that race because I believed she would be a better vote in congress than Sanford – whose second stint as a member of congress was a colossal disappointment.

While the proxy war between Trump and his GOP enemies has clouded things (considerably), I believe both Mace and Arrington would be solid votes for freedom and free markets – although Arrington’s recent rebuke of marijuana legalization is concerning.

Here is my question, though: Are either of these ladies going to drop the drama long enough to let us see where they are on the issues that matter?


I mean, I will certainly take the clicks that go with this drama … but I cannot pretend it is a contest worthy of the marketplace of ideas, either.

As far as I can tell, the only thing these two women are campaigning for is Mayor of Looneytown.

To say I am disappointed in both campaigns would be an understatement. Seriously: Is this a congressional campaign? Or two wanna-be mean girls pulling each other’s hair at recess?

In fact, the dueling drug/ lie detector text exchange recalled a famous moment in South Carolina politics when the late U.S. senator Fritz Hollings – campaigning for his fourth full term in office in 1986 – was challenged by an up-and-coming GOP politician named Henry McMaster to take a drug test during a televised debate.

“I’ll take a drug test if you’ll take an IQ test,” Hollings fired back at McMaster.

Let’s have both Mace and Arrington sit for one of those, shall we?

BANNER VIA: Katie Arrington for Congress