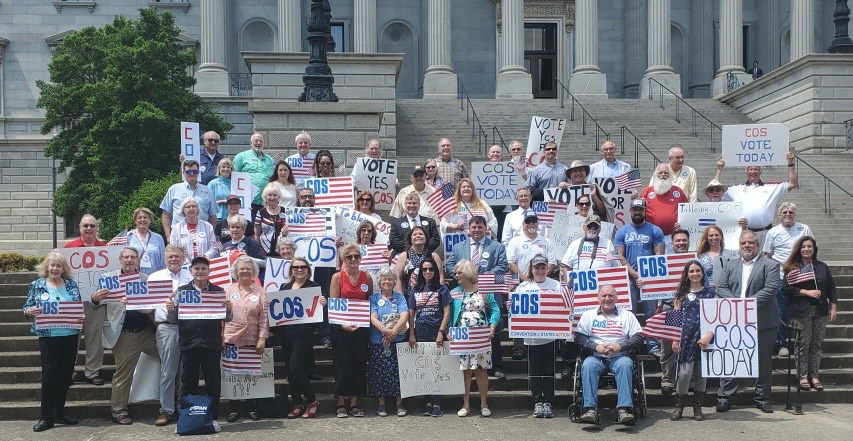 This method is how all 27 amendments have been accomplished.

Thankfully, the Framers understood human nature and knew that one day the federal government would become bloated and unresponsive to the will of the people. They knew that when this happened, Congress would never propose amendments that would restrain its power. So the Framers provided a second method in Article V, which allows the states to come together to propose amendments.


This method is often referred to as an amendment convention or Convention of States. After two-thirds of the states (34) agree to the topic(s) of the convention, they would appoint delegates to attend, propose, and debate germane amendment(s). Any proposed amendments agreed to at the convention still require ratification by three-fourths of the states to become part of the Constitution.

Convention of States (COS) is a nationwide grassroots organization that is working with state legislatures to pass a resolution calling for a convention to debate and propose amendments that would: impose term-limits on Congress and federal officials, impose spending restraints on the federal government, and reduce the size and power of the federal government.

People are joining the Convention of States movement en masse because they are realizing the need for a check on the federal government’s power. One-size-fits-all solutions and abuse of authorities reserved for the states has become standard operating procedure in D.C.

The South Carolina Convention of States movement has experienced explosive growth. Currently, there are 46,000 petition signers across the state. Nearly ten thousand signers are from the beginning of this year. There can be no doubt that South Carolinians are looking for their state legislatures to rein in the federal government.

The South Carolina legislature is positioned to join the 15 states that have already passed the COS resolution. They include other conservative southern neighbor states, such as Alabama, Arkansas, Florida, Georgia, Louisiana, Mississippi, Tennessee, and Texas. That’s a list South Carolina should be on.

For more information about Convention of States, visit our website by clicking here.