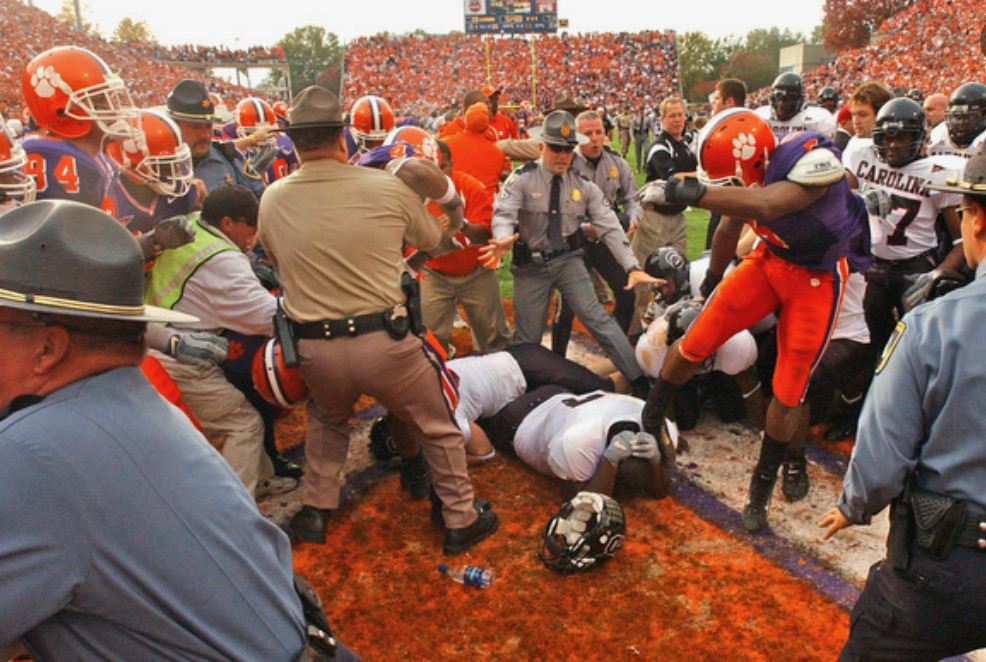 Former Clemson Tigers’ running back Yusef Kelly – the subject of several iconic images taken in the aftermath of a vicious 2004 brawl between the Tigers and their arch rivals at the University of South Carolina – is now in trouble over a much different kind of picture.

Kelly is under investigation by the S.C. State Law Enforcement Division (SLED) after he allegedly sent at least one inappropriate image to a juvenile.

“We have an open investigation involving Mr. Kelly,” SLED spokesman Tommy Crosby confirmed to this news outlet, although he did not immediately provide any details regarding the nature of that inquiry.

SLED was asked to investigate Kelly because of his status as a former member of the Easley, S.C. police department, sources familiar with the inquiry told me.

News of the investigation into Kelly was first confirmed by reporter Cody Alcorn of Fox Carolina, who reported that Kelly was “no longer employed” by the Easley police following a “brief investigation” the agency conducted into the allegations.

It will now be up to SLED to determine whether he should also face criminal consequences.

Of course, his career at Clemson is not remembered by any of those metrics …


On November 20, 2004, Kelly was a central figure in a notorious brawl that erupted between the Tigers and Gamecocks in Clemson, S.C. during their annual rivalry. The melee began at the 5:56 mark of the fourth quarter, with Clemson enjoying a 29-7 lead over South Carolina in what was the 102nd installment of this series – which used to be the longest continuously running, non-conference rivalry in American football.

From there, the violence exploded. Both benches emptied and players from both teams traded vicious blows up and down the field.  Among the most violent hits?  A sucker punch from South Carolina running back Daccus Turman against Clemson’s Duane Coleman – and of course Kelly’s infamous foot to the head of a defenseless Gamecock.

The original broadcast of the game can be viewed below (with the brawl commencing at the 2:11:00 mark) …

Both teams surrendered the bowl bids they had earned in the wake of the incident – and numerous players were forced to miss games the following season.  Also, both schools coordinated a hand-shaking ceremony between players prior to the kickoff of the 2005 game in an effort to promote better sportsmanship between the two programs.

“It was a fight,” Kelly said after the game. “Everybody knows things like that happen during a fight.”

After the brawl, Kelly paraded in front of the Clemson student section with a captured Gamecock helmet – tossing it jubilantly into the stands.

“They’ll have something to remember me by,” he said at the time.

Years after the brawl, Kelly told The Clemson Insider he “went on the field as a peacemaker” but got upset after a Gamecock football player put him in “a chokehold.”

“I was a youngster out there,” Kelly said. “I try to tell people all the time don’t judge people in the snapshot of a moment.”

Speaking of not judging … Kelly has yet to be charged in connection with the ongoing SLED investigation. Even if he is eventually charged, as with anyone accused of committing any crime he would be considered innocent until proven guilty – or until such time as he may wish to enter some form of allocution in connection with a plea agreement with prosecutors related to any charges which might be filed against him.

But again, as of now there are no charges …

For those of you keeping score at home, Clemson boasts a 71-42-4 all-time lead in this “rivalry” – which was first played in 1896 and was played continuously between 1909 and 2019. Clemson currently enjoys a six-game winning streak over the Gamecocks, which is one victory shy of the series record.

Prior to that, South Carolina won five in a row over the Tigers …

South Carolina Officials Cannot Vote To Delay Their Own Elections