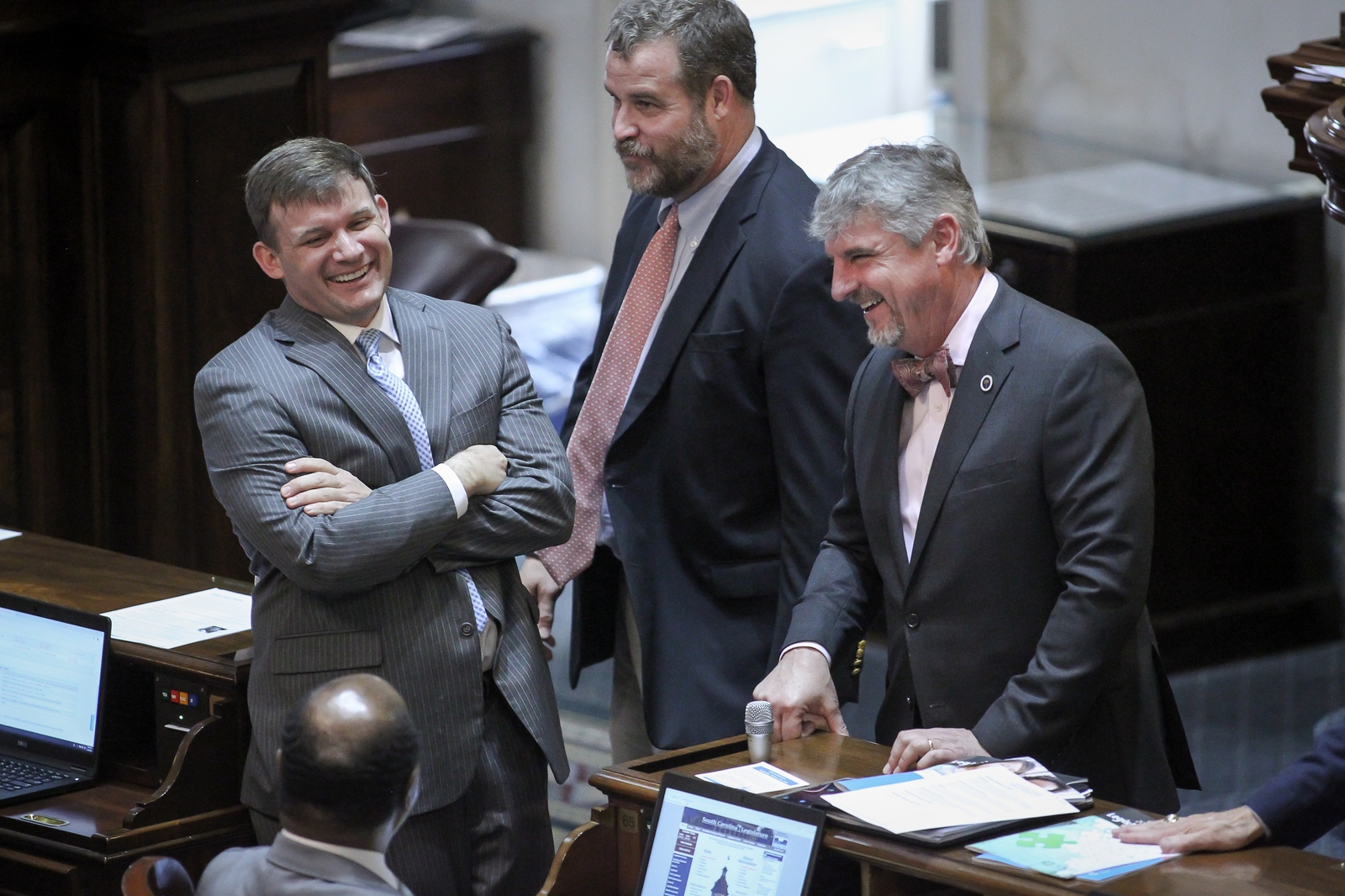 A South Carolina state lawmaker who previously lobbied for the S.C. Farm Bureau has been continuing to work for the organization as a paid “marketing” consultant over the last seven years, documents filed with the S.C. State Ethics Commission (SCSEC) reveal. During that time, state representative Russell Ott has been publicly advocating for – and casting votes in favor of – the organization’s top legislative priorities in his capacity as a member of the S.C. General Assembly.

Not only that, Ott acknowledges talking to other state lawmakers and urging them to support these priorities.

Is any of this ethical?

First, the facts: Russell Ott’s statements of economic interest indicate he has received an estimated $75,000 annually from S.C. Farm Bureau through his consulting firm – Center Hill Consulting, LLC. The disclosures began in 2014 – the year after Ott was elected to replace his father in the SC. House of Representatives.

Prior to being elected to the S.C. House on October 29, 2013, Ott was a lobbyist for S.C. Farm Bureau – a job he could obviously not continue given his status as a newly elected lawmaker. Accordingly, he entered into an “independent contractor agreement” with the organization on November 7, 2013 – scarcely a week after he took office.

Over the intervening years, Ott has (not surprisingly) been a staunch advocate for the S.C. Farm Bureau. In fact, he has been a vocal proponent – and a reliable vote – on behalf of its top legislative priorities, not to mention an acknowledged advocate of S.C. Farm Bureau bills with his colleagues. This year, for example, Ott has been an aggressive supporter of each of the group’s top three agenda items – including a bill aimed at eradicating feral swine in the Palmetto State.

“Feral hogs are responsible for an estimated $115 million in damage statewide each year,” an S.C. Farm Bureau release noted. “SCFB is working closely with legislators to ensure continued funding for the feral swine eradication and control pilot program administered by USDA that provides information on the options for controlling this invasive species.”


According to a roll call vote (.pdf) taken on February 23, 2021, Ott voted for the feral hog bill backed by S.C. Farm Bureau when it cleared the S.C. House. He voted for the bill again (.pdf) on May 4, 2021 when it was amended by the Senate and voted for it a third time (.pdf) on May 6, 2021 following additional Senate modifications.

This legislation was signed by governor Henry McMaster on May 17, 2021.

“We are ecstatic we were able to get this legislation passed,” Ott’s father said in a statement. “While it is not the only solution to the feral hog problem, it’s definitely a step in the right direction. I’m thankful that the General Assembly and their staff listened to our farmers and took action.”

According to the elder Ott, his organization “led the way for passage of the bill.”

“As has been made abundantly clear as we have transitioned to a ‘virtual meeting society,’ access to broadband in rural areas must be improved,” a release from the organization noted. “SCFB is working with the General Assembly to increase funding and access to broadband for our rural communities.”

Ott cited “improved broadband” as one of his top priorities in a January 2020 opinion piece published by The (Columbia, S.C.) State newspaper – and helped push the passage of legislation to that effect. In fact, Ott voted in favor of a rural broadband bill which cleared the S.C. House of Representatives on September 24, 2020 and was signed into law by McMaster five days later.

Ott cited his support for additional “broadband accessibility” in a February 2021 interview with the Catholic News Agency.

“Currently, water is managed by multiple government agencies,” the organization noted in a release. “All the red tape (different for each agency) can lead to discrepancies in policy and efficiency, and also makes accessing this resource it difficult for farmers. SCFB believes water management should be handled by a single agency to increase transparency and reduce burdensome regulations for agriculture.”

Ott addressed this issue in an October 2020 interview with reporter Chloe Johnson of The (Charleston, S.C.) Post and Courier, mimicking the S.C. Farm Bureau language about existing regulations being “too burdensome” and subjecting rural areas to punitively “high scrutiny.”

Is Ott’s advocacy on behalf of S.C. Farm Bureau legal?

The Palmetto State’s code of laws (§ 8-13-700) expressly prohibits elected or appointed officials in the Palmetto State from using their “official position or office for financial gain.”

“No public official, public member, or public employee may knowingly use his official office, membership, or employment to obtain an economic interest for himself, a family member, an individual with whom he is associated, or a business with which he is associated,” the law states.

Given that both Ott and his father are being paid by this organization, how does what he is doing fall within the letter of the law?

Furthermore, the law states that “no public official, public member, or public employee may make, participate in making, or in any way attempt to use his office, membership, or employment to influence a governmental decision in which he, a family member, an individual with whom he is associated, or a business with which he is associated has an economic interest.”

Again, this would seem to preclude Ott from his current paid advocacy on behalf of this organization and its legislative priorities.

In those cases in which officials are “required” to take an action which “affects an economic interest” of theirs (or their family or an individual or business they have ties to), a host of disclosure requirements kick in.

Or are supposed to kick in …

Specifically, lawmakers must furnish the clerk of the S.C. House with a written statement describing the “nature of his potential conflict of interest.” This statement must be “printed in the appropriate journal,” at which point the clerk must “require that the member of the General Assembly be excused from votes, deliberations, and other action on the matter on which a potential conflict exists.”

Does this happen? Um … no. Hardly ever.

In this case, Ott did the right thing by disclosing his conflict of interest on his statements of economic interest with the S.C. State Ethics Commission (SCSEC). I give him full credit for that. Unfortunately, I believe he did the wrong thing by failing to recuse himself from multiple pieces of legislation backed by his employer.

Ott told me on Tuesday he “not agree with that reading of the law” – and drew a distinction between legislation which provides a direct financial benefit to S.C. Farm Bureau and legislation which is a matter of public interest.

“I was lobbying for Farm Bureau prior to running for the General Assembly,” Ott told me. “I have a contract with Farm Bureau, I’m not an employee. The working relationship with them is outside of anything legislative.”

Ott produced typed notes from a meeting he had on July 2, 2013 with Cathy Hazelwood, the former staff attorney of the SCSEC. According to these notes (.pdf), Ott was advised that “the only types of votes that I would need to abstain from casting would be those that directly impacted SCFB.”

According to Ott, Hazelwood also recommended he “refrain from being the primary sponsor of any legislation that is being pushed solely on behalf of SCFB.”

Ott says he has played by those rules since becoming a member of the S.C. House.

“I cannot vote on anything that benefits Farm Bureau directly,” Ott told me. “If it is general statewide policy related to agriculture, though, there is no prohibition there.”

Ott also told me he has “never asked a fellow lawmaker to support a measure directly benefiting Farm Bureau,” but that he has asked lawmakers to support bills the organization has identified as its top legislative priorities.

“I have never approached any subject matter with any member of the General Assembly and told them ‘this is a Farm Bureau position, we need to support it,'” Ott said. “That in my opinion would be lobbying on behalf of Farm Bureau.”

Stay tuned … I plan on editorializing extensively on these sorts of arrangements in the very near future. In the meantime, however, I believe it is important to state unequivocally that any lawmaker who receives compensation from an entity with business before the state should know better than to vote for or publicly advocate on behalf of that organization’s legislative priorities.

In fact, I believe such compensation should be banned outright …