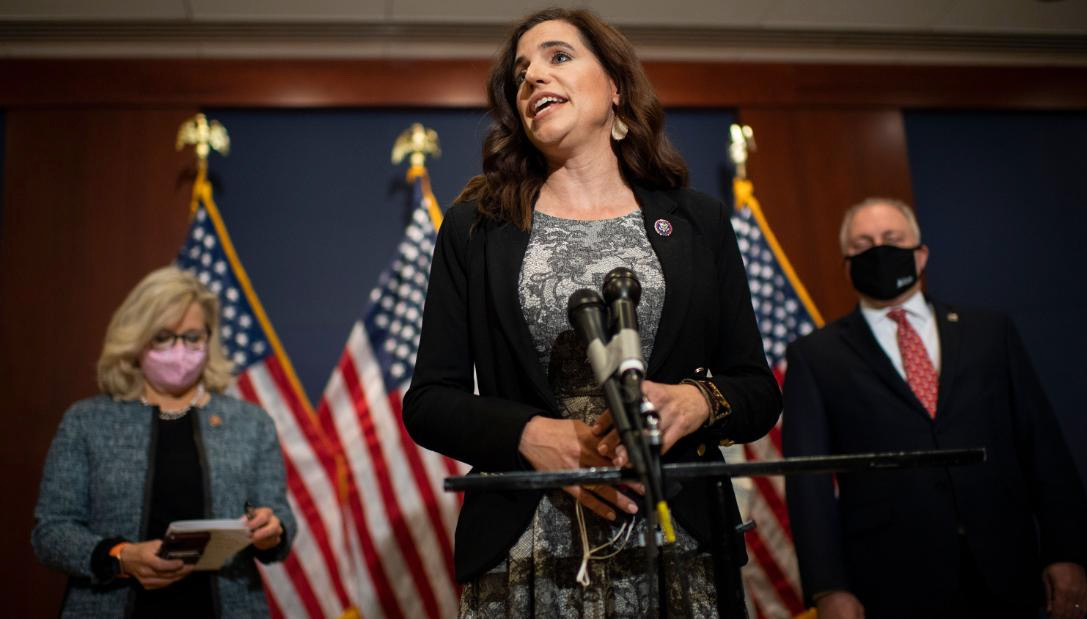 In his sermon on the mount, Jesus Christ offered up some sage advice regarding how to deal with tough questions. “Simply let your ‘Yes’ be ‘Yes,’ and your ‘No,’ ‘No,'” he said. “Anything more comes from evil.”

Indeed. And it is wisdom someone probably ought to pass along to U.S. congresswoman Nancy Mace of South Carolina …

After spending the first few months of her maiden term in Washington, D.C. vacillating wildly in regards to former U.S. president Donald Trump (her employer during the 2016 presidential primary election) Mace eventually tacked back to “MAGA-land.” Conservative activists were unimpressed with her pendulum swings, though, and Mace has already drawn one GOP primary challenger in her bid for a second term.

More are likely coming, too …

According to sources familiar with the situation, Mace landed on Trump’s radar in a big way with her comments following the mob violence that went down at the U.S. capitol on January 6, 2021.

“Everything that he’s worked for – his entire legacy – was wiped out yesterday,” Mace said at the time.

Within a month, though, the first-term Republican from Daniel Island, S.C. had changed her tune – and was once again singing Trump’s praises. Mace also benefited from the fact that another South Carolina congressman – Tom Rice – joined nine other Republicans in voting to impeach Trump for allegedly inciting the rioting at the capitol. That “hold my beer” moment took some of the heat off of her, as did former South Carolina governor Nikki Haley’s high-profile Trump-related vacillations.

A little over two weeks ago, my news outlet reported on Mace’s participation in fundraising events with congresswoman Liz Cheney – who earlier this week lost her leadership position within the U.S. House Republican caucus. Like Rice, Cheney was among the ten GOP members of the House who voted to impeach Trump.

Cheney has become Trump’s top target for defeat in the 2020 Republican primary elections – and the vote to oust her from her leadership position within the GOP caucus was widely viewed as a “litmus test” of support for the former president.

Four members of the South Carolina GOP congressional delegation – Jeff Duncan, Ralph Norman, William Timmons and Joe Wilson – have publicly announced that they voted against Cheney. According to reporter Thomas Novelly of The (Charleston, S.C.) Post and Courier, Rice did not respond to a request for comment on the vote.

And Mace? How did she vote? According to Novelly, she “declined to comment about her vote.”

I’m sorry, but that is completely unacceptable …

Look, I get it: Mace did not want to alienate Trump supporters any further than she already has by voting to keep Cheney in leadership. And she obviously didn’t want to cut herself off from the neoconservative cash Cheney can bring to her reelection bid by voting against her.


Even in our current spin cycle – an era in which politicians have mastered the art of simultaneously eating and having their cake – legitimate forks do occasionally appear in the road. Zero-sum decisions. Times for real choosing. And during such times, politicians must choose. And not only that – face the consequences of their choices. Or … face the consequences of not choosing.

That is what it is all about …

But declining to comment? That is the way of the coward …

Mace entered office four-and-a-half months ago with unlimited potential. But rather than pursuing a substantive policy agenda and displaying concrete conviction on tough decisions, she has pursued petty D.C. squabbles and been consistent only insofar as her flip-floppery. Mace has also played the identitypolitik game by branding herself as a “single mother” (even though the freshman congresswoman co-parents her two children with her former husband, Curtis Jackson).

It’s all too clever by half …

Here is the bottom line: Mace either voted to oust Cheney from leadership or she voted to keep her at her post. Or, she abstained. Whatever happened, the people who elected her (particularly GOP primary voters) deserve to know where she stood – and the fact Mace is refusing to tell them is downright contemptible.

UPDATE: One of Mace’s political advisors reached out to me moments after this story was posted. According to the advisor, Mace voted with Duncan, Norman, Timmons and Wilson to oust Cheney. “(Mace) believes she is just too divisive to be leading Republican party in Washington, D.C. right now,” the advisor told me.