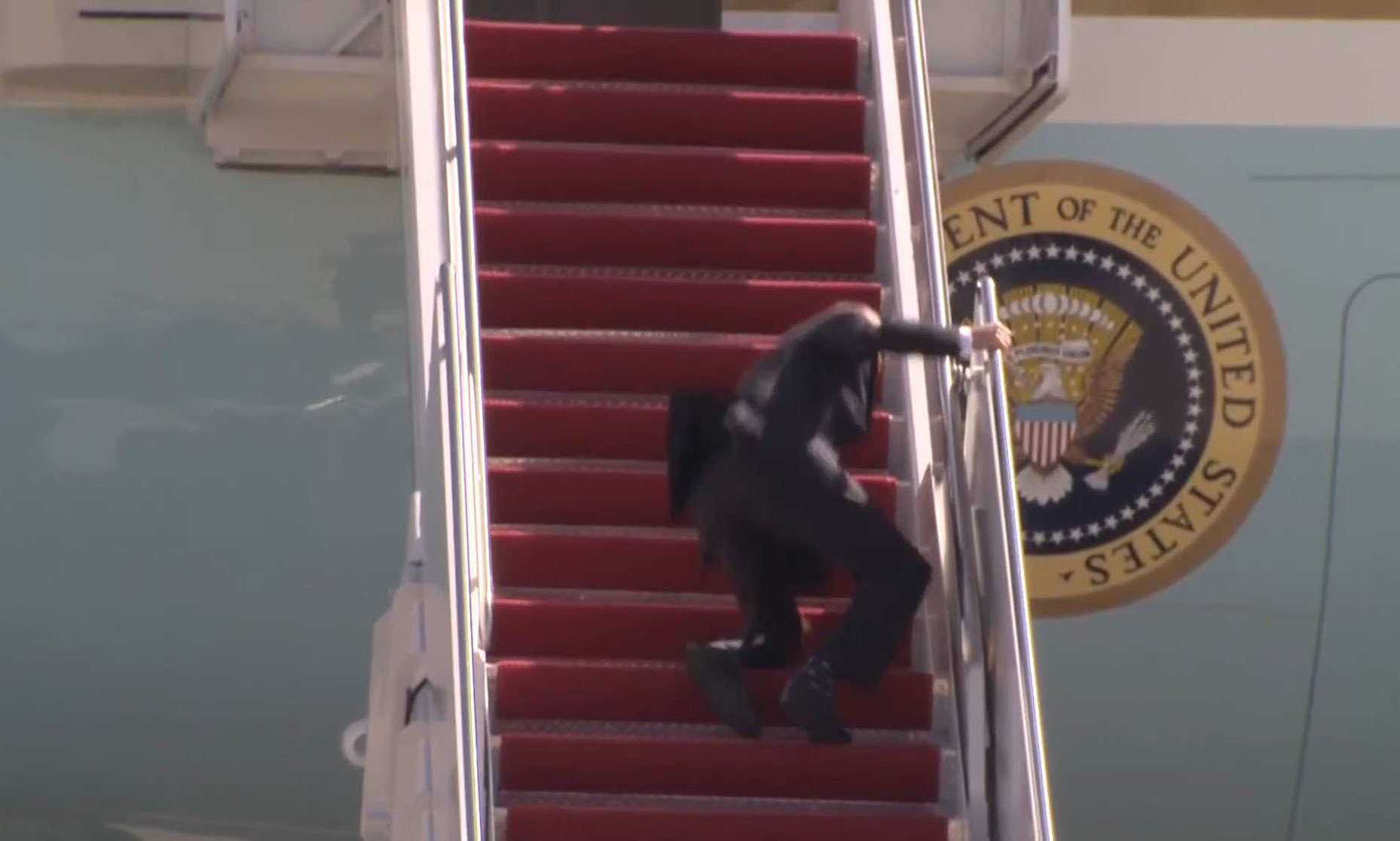 So I’ve watched the Joe Biden video – the one of him falling multiple times as he attempted to climb the stairs to Air Force One – at least a dozen times now and I’ll be honest, it gets funnier each time I watch it.

Seriously … old people falling down is funny (as long as no one was seriously hurt, of course).

In fact, anybody falling down is funny … which is why for the last three decades there has been a steady market for various iterations of “funniest home video” shows.

According to the White House, the 78-year-old Biden – the oldest chief executive in American history – was uninjured during his fall and did not require medical attention upon entering the plane.

“I know folks have seen that president Biden slipped on his way up the stairs to Air Force One, but I’m happy to report that he is just fine and did not even require any attention from the medical team who travels with him,” White House communications director Kate Bedingfield tweeted. “Nothing more than a misstep on the stairs.”

Which means we can all enjoy a good laugh, right?


Unfortunately, the White House couldn’t leave well enough alone, with one of its deputy press secretaries – Karine Jean-Pierre – telling reporters afterward that “strong winds” were responsible for Biden’s trips-and-falls on the stairs.

According to the National Weather Service (NWS), sustained winds at Joint Base Andrews measured only 15 miles-per-hour last Friday. Which makes the White House claim full of hot air …

What concerned me most about the Biden video clip, though, was not his difficulty navigating the stairs but rather the clueless aloofness displayed prior to his stumbles – not to mention the short bus-worthy “look-at-me, mom!” salute he gave following his “successful” climb.

That was almost as bad as the falls …

Seriously, watch the whole video. From his doddering trek across the tarmac to the awkward pause/ half-salute preceding his trips … Biden just looks like something is wrong with him.

Of course I’ve written as much before, and Biden certainly put questions about his cognitive sharpness to bed last fall with several better-than-expected debate performances against former U.S. president Donald Trump. Biden may not have all of his marbles present and accounted for at all times, but he found enough of them when he needed them.

Not surprisingly, though, his tumble on the stairs has revived the conversation regarding his physical health.

“I served as White House physician under THREE presidents,” U.S. congressman Ronny Jackson of Texas tweeted. “I’ve seen what it takes physically AND mentally to do the job. I can tell you right now that the way Biden is hiding from the public is a MAJOR red flag. Something’s not right!”


Jackson doubled down on his assertion in a subsequent tweet, saying Americans deserved to know “if their commander-in-chief has the cognitive ability to do the job.”

Regular readers of this news outlet know I am no fan of Biden or his policies. Personally, I think the guy is a hair-sniffing creep who has been coddled by the press ever since the Democratic establishment decided he was its choice for the White House. And while I was not necessarily a fan of Trump – particularly his many fiscal betrayals – generally speaking I believe the former president’s policies were better for the nation than those Biden and his leftist allies are advancing.

You know … the “moderate” agenda.

Still, I don’t ever want to see people get hurt … or become separated from their marbles (particularly someone with their finger on any number of different triggers).

Hopefully Biden will regain his balance … and his ostensible “centrist” ideology … soon.