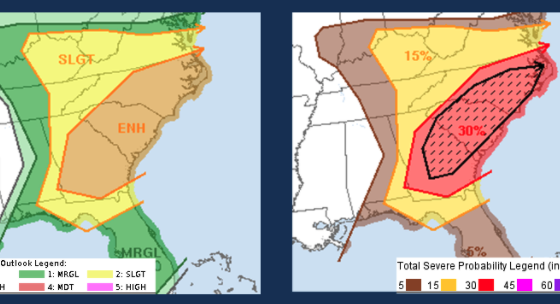 Chances are increasing for severe thunderstorms, hail, tornadoes and damaging winds to hit the Midlands this week, according to the National Weather Service (NWS) in Columbia, South Carolina.

A strong cold front moving into the region will likely bring strong thunderstorms from Thursday morning to Thursday evening, according to the NWS.


The storm system is forecast to hit Texas Tuesday and then move eastward by Wednesday and into the Mississipi Valley region by Wednesday night, according to AccuWeather.

By Thursday, the large cluster of storms threatens most of the Southeast region from northern Florida to southern Virginia, according to AccuWeather.

In a Tuesday morning briefing, Columbia, South Carolina forecasters said that confidence is increasing that the region will see significant severe thunderstorms Thursday.

The area inside the red and black circle on the map below (which is most of the state except the Lowcountry coast) is at risk for one of or more of the following:

Forecasters are urging South Carolina residents to take this storm seriously and watch the weather this week.

“Make sure you have a plan in place, safe place for shelter and multiple ways to reliably receive warnings,” NWS forecasters said on Tuesday.

The storm system isn’t predicted to bring much rain, so forecasters aren’t concerned about flooding. Most of South Carolina is expected to get less than two inches of rain in the next 48 hours, with the highest amounts in the upstate.


The storms are expected to clear by Thursday evening. Here is the weather forecast for Columbia, South Carolina (provided by the National Weather Service).

Tuesday Afternoon:A chance of showers. Cloudy, with a high near 47. North wind 3 to 5 mph. Chance of precipitation is 50%. New precipitation amounts between a tenth and quarter of an inch possible.

Tonight: Showers and thunderstorms likely before 3am, then a slight chance of showers between 3am and 5am. Patchy fog after 2am. Otherwise, cloudy, with a low around 45. Light northeast wind. Chance of precipitation is 70%. New rainfall amounts between a quarter and half of an inch possible.

Wednesday:A chance of showers, mainly after 2 p.m. Patchy fog before 10am. Otherwise, cloudy, with a high near 65. Light northeast wind. Chance of precipitation is 30%. New precipitation amounts of less than a tenth of an inch possible.

Wednesday Night:A chance of showers. Cloudy, with a low around 59. East wind 5 to 7 mph. Chance of precipitation is 50%. New precipitation amounts of less than a tenth of an inch possible.

ThursdayA chance of showers and thunderstorms, then showers and possibly a thunderstorm after 2pm. High near 76. South wind 8 to 16 mph, with gusts as high as 28 mph. Chance of precipitation is 90%. New rainfall amounts between a quarter and half of an inch possible.

Friday: Mostly sunny, with a high near 68.

Friday Night: Partly cloudy, with a low around 39.

Saturday: Sunny, with a high near 57.

Saturday Night: Partly cloudy, with a low around 36.

Sunday: Mostly sunny, with a high near 62.