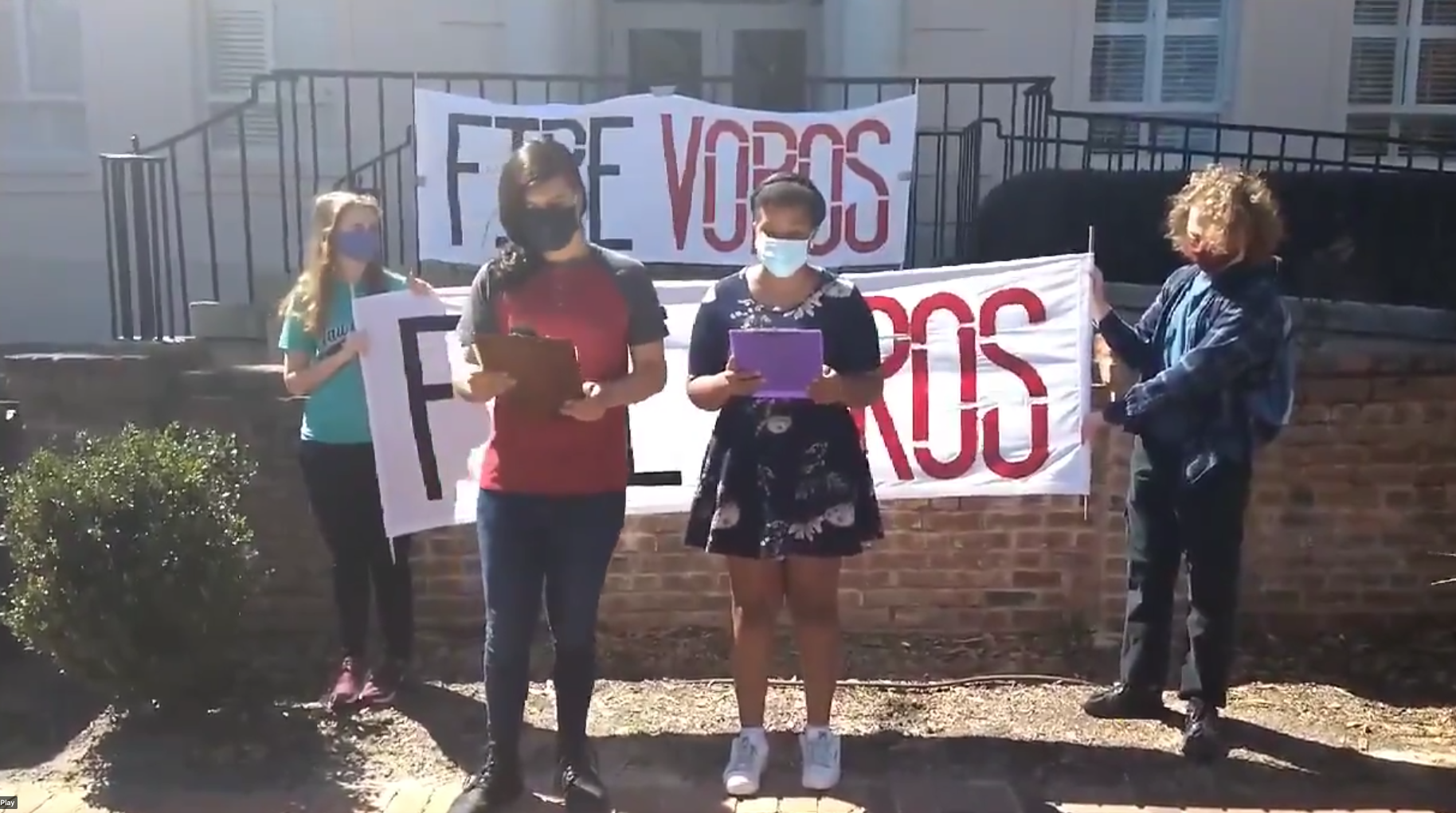 A group of University of South Carolina (USC) students hasn’t forgotten about the professor who was sued three times for sexual harassment — and they are making sure president Bob Caslen doesn’t forget either.

The group — named “Coalition to Fire David Voros” — hand delivered a letter to Caslen’s office at the Osborne Building in Columbia, South Carolina the Thursday. The letter demands that the university terminate the tenured art professor and change the system that enabled his alleged behavior.

Students carrying large “FIRE VOROS” signs protested Thursday afternoon outside of Caslen’s office, SGTV News 4 first reported. The group of USC students then entered the administration building to give the letter to administration.

The letter to Caslen included the same demands as the group’s petition —which has over 2,500 signatures since it was published in December.


Just five days after the group published their petition in December, USC removed Voros from his classroom duties — but that didn’t come close to fixing the issues students are concerned with.

“This action does not address the fundamental problems at the School of Visual Arts and Design or the University of South Carolina,” the letter said. “The silence from your administration in the intervening months since his reassignment has been deafening.”

On Thursday, as students gathered outside of the Osborne Building for the protest, USC student Lauryn Workman read the letter to the crowd.

“You must listen to survivors of abuse and act on those allegations,” the letter said. “David Voros and those like him have no place at the University of South Carolina and we call on you to advocate for his immediate removal and support an overhaul of EOP.”

The USC students were quickly kicked out of the building by administration for allegedly disrupting education, but they were able to give the letter to the front desk.

The coalition was formed in light of recent media coverage on the three lawsuits against Voros and USC.

But one year before those lawsuits were filed, USC settled Allison Dunavant‘s lawsuit with “the same complaints and concerns” about Voros and USC administrators, Dunavant told FITSNews in an exclusive interview in December (click the photo and link below to read Allison’s story).

Dunavant said Voros harassed, intimidated and isolated her during a horrific 2016 study abroad trip to Italy when she was a graduate student.

All three women describe similar stories — they allege Voros harassed them and the university continuously protected him when they reported his behavior.

““From the very beginning, I was treated like I was the problem and the university made it very hard to even file a complaint,” Dunavant previously told FITSNews. “The complaint process felt more like a system to run you into wall after wall until you get too tired and too frustrated and you give up.”

While USC does protect tenured professors, it is not impossible to fire them. One of the reasons for firing a tenured professor at USC is “misconduct related directly and substantially to the fitness of the faculty member in the professional capacity as teacher or researcher,” according to the faculty manual.

Voros is still drawing a salary from USC, even though he’s been removed from the classroom.

In 2019, USC agreed to pay Dunavant $75,000 last year in a settlement for her lawsuit. Since she filed her original harassment complaint, Voros has made more than $315,000 from his university salary.

“It’s time for USC to do something, say something…anything,” Workman said Thursday. “Why are our tuition dollars still paying a predator’s salary? Why won’t the administration address our demands?”