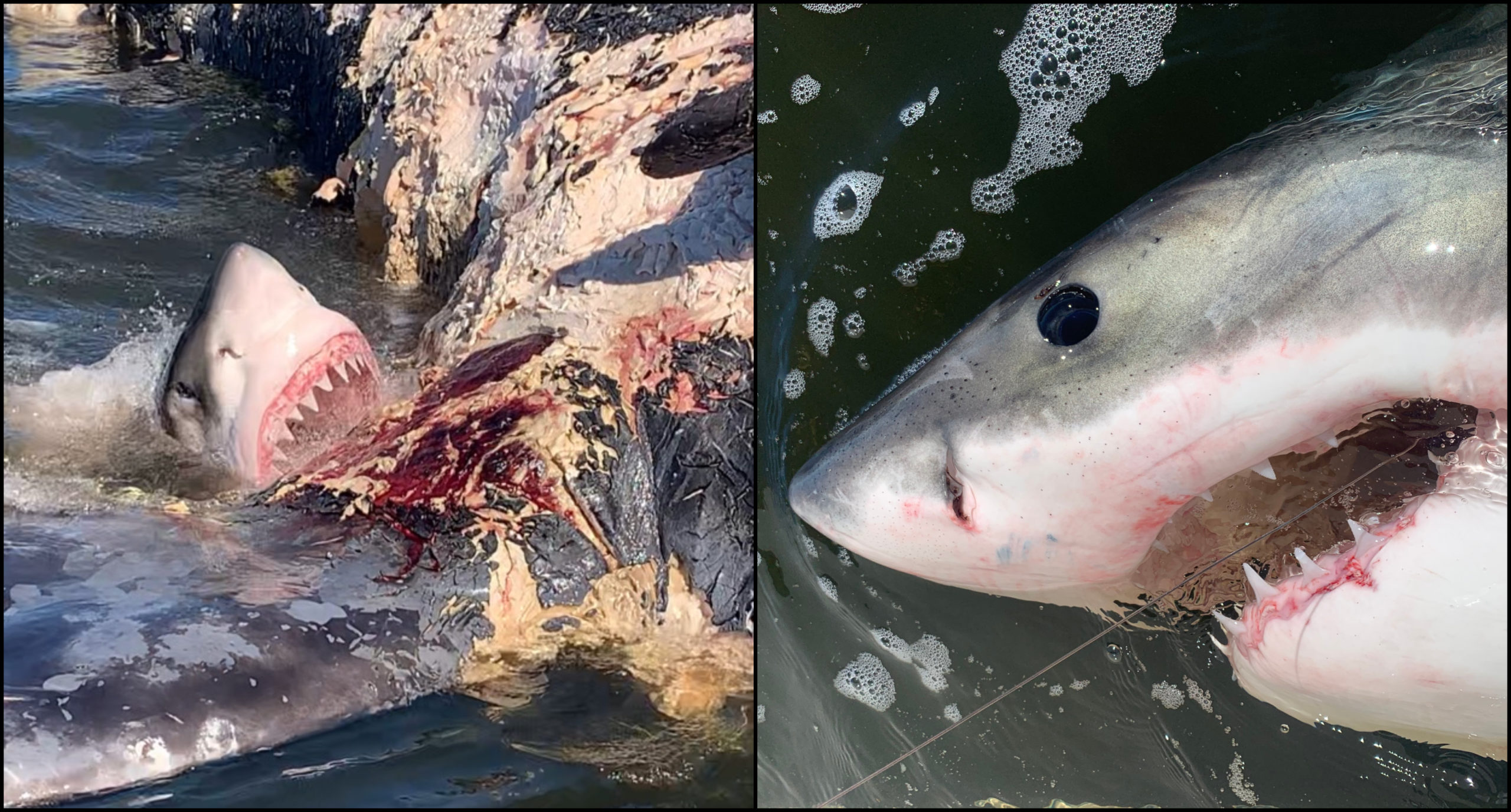 Hilton Head’s Great White Shark Whisperer has dreamed his whole life of days like Thursday — when he witnessed seven great white sharks chomping down on a dead 30-foot North Atlantic Right Whale off the coast of South Carolina.

“It was indescribable,” Chip Michalove, Outcast Sport Fishing charter captain from Hilton Head Island, South Carolina said Friday morning. “I feel weird being in my house right now when something so incredible is happening right now off our coast.”


When Michalove first saw photos of the dead whale floating off the Myrtle Beach coast Tuesday night, he knew he had to see it for himself.

“It was a once-in-a-lifetime opportunity,” Michalove said.

Michalove has caught, tagged, and released over 30 great whites for scientific research. Every time he catches a great white — a feat of its own — he does his best to place a tag on the fish so scientists can track the shark’s movements in the Atlantic.

All week, the Great White Shark Whisperer watched the weather, hoping the water would calm down for just a day so he could get to the whale. He spoke with experts who tracked the whale carcass as winds pushed it south and closer to shore.

Finally on Thursday, a window of weather opened up and Michalove’s fishing crew headed north.

“I dropped my dog off at Green Dog Daycare Wednesday and told them I don’t know when I’ll be back or if I’m coming home,” Michalove joked as he looked back on the last 48 hours. “I was just so excited.”


“So many things had to go right,” he said. “You have to have the right weather. Then, you have to find the whale and hope it didn’t beach itself. We were hoping that other boats didn’t get there before we did.”

Michalove said it was a lot harder to find the massive whale than people would think.

“You’re not going to see it unless you’re a half-mile from it,” Michalove said. “The majority of it is under water. It’s moving about 1-2 MPH. It’s not easy to do.”

But Michalove and his crew of experts on an SCDNR boat were determined, and they lucked out with Mother Nature on Thursday.

“As soon as we saw it from about a half-mile out we slowed down,” Michalove said. “And then when we got next to it, there were no sharks there. We thought it would be like shooting fish in a barrel and there was just nothing.”

But the crew had patience and waited.

About 40 minutes later, they heard a big splash.

“We look over and there’s a 12-foot great white shark chewing on the armpit of this right whale,” Michalove said. “That alone was just mind-blowing.”

The crew had to stay for more. They made sure to keep a good distance from the whale as it’s illegal to touch the endangered animal, even when it’s dead.

The North Atlantic right whale is “among the rarest of all large whale species and, indeed, of all marine mammal species,” according to the South Carolina Department of Natural Resources.

In fact, a 2020 National Oceanic and Atmospheric Administration (NOAA) study reported there were around 366 North Atlantic right whales left in the world.

“Then 30 minutes later, another great white showed up, and then we tagged an even bigger one,” Michalove said. “The biggest one we saw all day was a 16 footer.”

Michalove said they knew they saw at least seven great white sharks, but the water was so murky it was hard to tell how many were feeding on the massive whale under the surface. He said there could have been 15.

“The oil slick coming off of it was like a highway,” Michalove said.

They were able to tag two of the great whites. Michalove places a SPOT (Smart Position or Temperature Transmitting ) tag on the fin so that scientists at the Atlantic White Shark Conservancy — along with anyone who has the Sharktivity App — can track the shark’s movements in real time.

“At one point, a big (great white) grabbed the motor and shook it hard, so we had to raise the motor out of the water,” Michalove said. “Another one circled the boat several times. It was like being in a zoo with all apex predators. Just unbelievable.”

Michalove said the great whites can smell the dead whale from miles away.

Michalove said that at the rate the great white sharks were chomping at the carcass, it would be totally consumed in the next few days.

That means a lot coming from Michalove.

‘You Must Listen To Survivors Of Abuse’: USC Protesters Demand Professor Be Fired