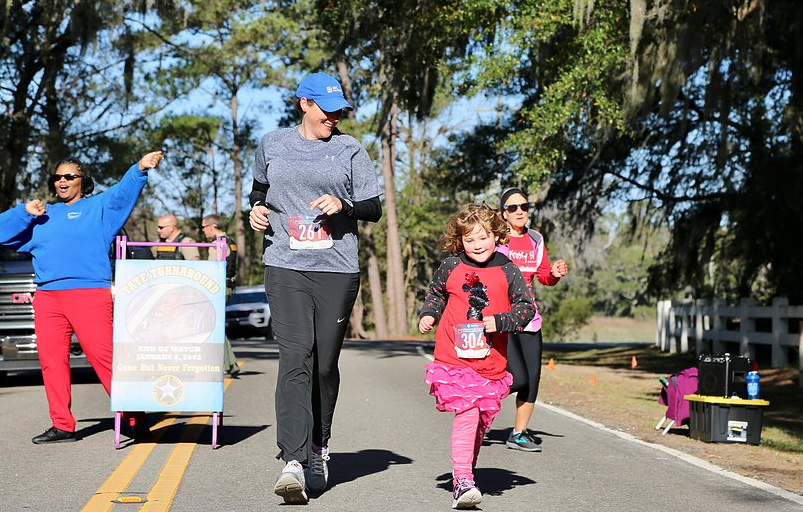 Hi, my name is Marie R. Tate and I live in Beaufort, SC.

My moment on fire is when I realized the scope of how God used me to have an impact on people’s lives. I became a Board Member of a non-profit organization, then CODA (Citizen’s Opposed to Domestic Abuse) now Hopeful Horizons, after my husband and another deputy responded to a domestic abuse call where they were both killed in the line of duty.

I had joined the Board and thought it would help me to understand the plight of the domestic abused victim. I wanted to try to find out: why my husband became a statistic; why they could not have done, said, gestured something to him to alert him that the abuser had a gun; why do victims keep returning. Anyway, to God be ALL the glory I/HE dealt with the murder, the funeral, the trial, the confusion, the new role of widowhood and single motherhood that changed my and my family’s lives on January 8, 2002 forever.

The Holy Spirit put the idea of a 3 Mile Walk/Run on my heart, I discussed it with my fellow Board members and the 2012 Tate/Coursen Memorial Walk/Run was underway to commemorate the 10th year of the guys’ ultimate sacrifice. The positive support from people in and around the community was overwhelming! The Beaufort Car Club came out in full force, my husband loved muscle cars, they revved their engines and that’s how the race began.


The following year the race was renamed Race4Love and has been held annually the Saturday closest to Valentine’s Day in February. Race participation and funds raised continues to increase yearly as the word about domestic abuse circulates. Raising money to help educate victims and the public, funding programs for domestic abuse victims and their families, and providing legal aid are some of the things for which Hopeful Horizons uses the proceeds. Since it started, the race has raised $94,000.

This moment is important to me because I realized from the January 8, 2002 tragedy, God used me to help start a race that would provide a means to raise proceeds to help save the lives of hundreds of people. I feel, since this writing tremendously humbled and at awe at God for using me.

Race4Love is Saturday, Feb. 20 and Walk4Love is Friday, Feb. 19. Virtual options are also available. For more information about the race, please visit the website.

Beaufort, SC – Hopeful Horizons’ annual Race4Love has been retooled and reimagined for 2021!

The 9th annual Race4Love, presented by Stokes Toyota of Beaufort, will be held Saturday, February 5 at 9 am on Cat Island. Hopeful Horizons is limiting the number of runners who can participate.

A new event, the Candlelight Walk4Love, will begin at 5:15 pm, Friday February 19 at First Presbyterian Church in downtown Beaufort. The walk will be limited to 50 people. Participants will walk from the church to the bridge and light up the bridge with battery-powered candles to honor abuse survivors.

“We are grateful for the sponsors and volunteers who have come together once again to support the Race4Love – and the addition of the Walk4Love,” said Kristin Dubrowski, CEO of Hopeful Horizons. “Survivors of abuse need the support of the entire community, especially in 2021, and this is one way you can show your support and help to raise awareness.”

Prizes will be given to the top two male and female overall and medals will go to the top three in each age division. All children age nine and under will receive medals. Prizes will also be awarded for the best fastest stroller, the speediest dog, and a new award for the most unique mask.


The Race4Love has its origins in the Tate/Coursen Memorial Walk/Run that was organized by Marie Tate in 2012. The event honored Lance Cpl. Dana Tate and Cpl. Dyke “A.J.” Coursen, two Beaufort County Sheriff’s deputies who were killed when responding to a domestic violence call in 2002. Marie Tate, Lance Cpl. Dana Tate’s widow, is still actively involved in Race4Love.

For more information on the 9th annual Race4Love/Walk4Love and to register, visit www.race4love.com.  Hopeful Horizons is a children’s advocacy, domestic violence and rape crisis center that works to create safer communities by changing the culture of violence and offering a path to healing. The organization provides safety, hope and healing to survivors through evidence-based practices, outreach, prevention and education. Hopeful Horizons serves Beaufort, Colleton, Hampton, Jasper and Allendale counties. For more information, visit www.hopefulhorizons.org.

Marie R. Tate lives in Beaufort, South Carolina and works for Tate Enterprises LLC. On January 8, 2002, her husband was one of two deputies killed while responding to a domestic violence incident. She is a Hopeful Horizons Board member.