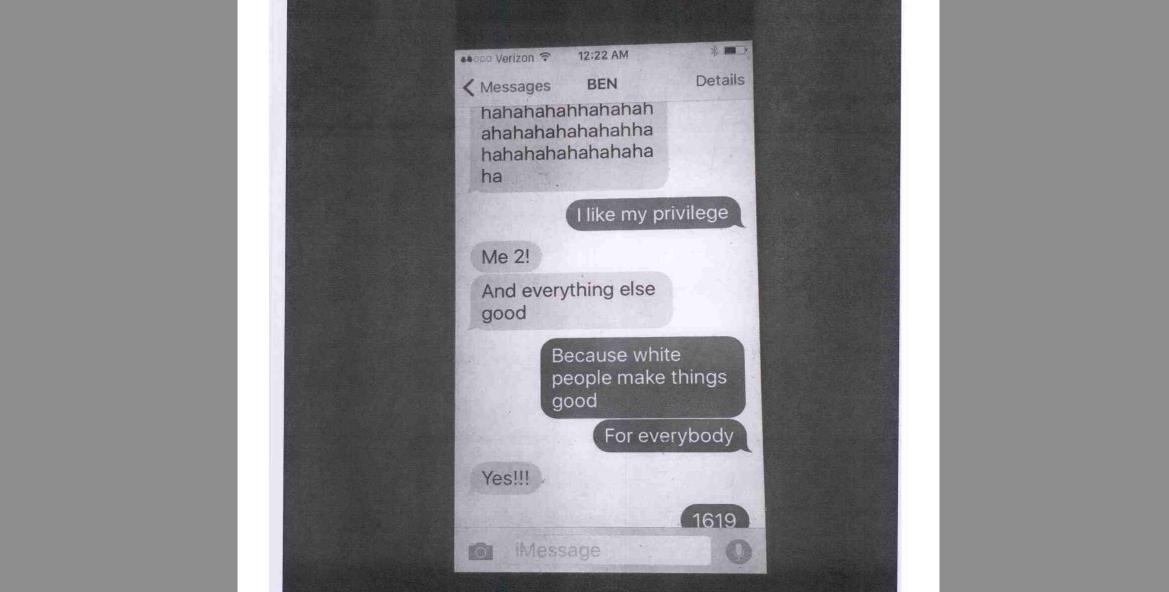 Attorneys representing two black Columbia, South Carolina teenagers —who say they were coerced into signing a rape confession — filed a slew of documents regarding racist text messages allegedly sent by the lead investigator in the case.

Furthermore, the attorneys argued in a federal lawsuit that a “culture of coverup and misconduct” had influenced officers in the Richland County South Carolina sheriff’s department.

The texts are important because they were allegedly sent by two Richland County deputies at the center of high-profile incidents involving black citizens.

We reported on these texts back in September …

Kewon English and Earl Powell, who were allegedly coerced by Clarke into signing rape confessions, are suing the sheriff’s department, Clarke and Richland County Sheriff Leon Lott in separate lawsuits in both county and federal court.

Attorneys Kyle J. White and Andrew Delaney – who represent English and Powell – argued that the text messages provided evidence of Clarke’s racial bias, proving he had credibility issues as the lead investigator in the case.

Now, however, Clarke’s former girlfriend Nicole Williams is saying she wrote the racist text messages that have become a central part of the lawsuit – admitting she sent them to a filmmaker for revenge.

And there’s more to that story …

Williams, a former Richland County sheriff’s employee who now works at the South Carolina Network of Children’s Advocacy Centers, told internal affairs investigators that the racist texts in question were actually screenshots of conversations between her and her father, according to documents filed last week in the case.

Confusing? Yes. Very. But stay with us …

Where the texts came from

The evidence that attorneys claimed showed racial bias in this case originated from attorney Aleksandra Chauhan, according to her signed affidavit.

At some point during her relationship with Clarke, Williams had permission to look at Clarke’s phone and allegedly found texts “between Clarke and former RCSD Deputy Benjamin Fields, which contained horrific racist language including the word “n****r” and other racist words and phrases,” the affidavit said.

If you don’t remember Fields, this video of the incident at Spring Valley that cost him his job might ring a few bells …

This summer, filmmaker Garrett Zevgetis visited Columbia for a documentary he is producing entitled “Disturbing Schools.” This documentary focuses on the Spring Valley incident and the story surrounding it.

Chauhan assisted with the film and helped Zevgetis gather sources, the affidavit said.

Chauhan connected Williams with the filmmaker after she saw the racist texts between police officers, the affidavit said. Williams then agreed to do an interview about the texts on June 13, 2020.

It’s unclear how the Richland County sheriff’s department got wind of the text messages, but internal affairs investigated the incident on July 29, 2020, according to documents filed in the federal case.

When Williams was interviewed, she completely changed her story from what she told the attorney and the filmmaker.

“The text messages that I sent were actual conversations between my father and I,” Williams said under oath. “I was upset and angry and Ben was my focus.”

In a text message, she told Clarke that sending the texts to the filmmaker was “her version of revenge sex.”

She added that the filmmaker believed the texts were between Ben Fields and Joe Clarke.

“Around June of this year, I started telling (the filmmaker) these texts were fake,” Williams statement said.

What did the texts say?

The texts, shown below, purport to be from a person named “Ben.”

“Because white people make things good for everybody,” Ben says.

“1619,” Ben replies, referring to the year black slaves were brought to America.

In another screenshot, one of the text messages refers to how “women and minorities are hurting this country badly.”

Another text talks about “making excuses for n****rs.”

Another text says “white boys are expendable we are a dime a dozen we are all lined up out the door trying to become cops.”

According to Nicole William’s sworn statement, these were real conversations between herself and her father, Edward Sutton.

Williams said her fathers nickname is “Benji” for short, which is why his name is entered as “Ben” in her phone.

According to the internal affairs documents obtained in the lawsuit, Richland county investigators didn’t ask Williams many details about the texts.

Why would someone take photos of their own phone showing racist text messages between them and their father?

Why would Williams – a woman – text that “women and minorities are hurting this country badly?”

Was Williams’ father a police officer trying to get a job? If not, why would he write that “white boys are expendable we are a dime a dozen we are all lined up out the door trying to become cops?”

And if Williams’ goal in all of this was to exact revenge against Clarke, why would she specifically name Ben Fields and go to the trouble of showing an attorney – and then a filmmaker – these texts?

After Williams signed her statement claiming she sent the texts, the internal investigation was closed, sheriff Lott said in a deposition.


Lott said investigators could have looked through Clarke’s phone to investigate the matter further – but it is unclear whether they did that.

On September 10, Williams was deposed by White and Delaney — the attorneys representing Powell and English.

Curiously, Clarke was present with Williams at her deposition.

Williams was drilled with over 100 questions about the text messages, her relationship with Clarke, why Clarke was there, etc.

Williams asserted her Fifth Amendment right against self-incrimination in response to nearly all of his questions — only admitting to seeing the racist texts that were provided to the sheriff’s office.

Again, Williams asserted her Fifth Amendment right against self-incrimination in response to each of those questions — and others — related to the case.

In a September 10 deposition, Chauhan described the text messages between Clarke and Fields as “horrific” and containing “very explicit hatred of black people using N-Word all along.”

She said the texts provided to the sheriff’s office were not the ones Williams showed her on multiple occasions.

She said the ones she saw were worse.

“Joe at least once used the word N***** without any additional wording,” Chauhan said. “Like Ben Fields on the other hand would be the one who would say ‘I hate n*****s. I don’t recall phrases other than I hate them.”

Chauhan said she last spoke with Williams via text in early September – and that Williams was afraid of losing her job “because of what she said during the interview that she has had on the record for the film.”

Chauhan told Williams, whom she identifies as her friend, that she was sorry she feels “threatened like that.”

In Lott’s deposition, White asked if Williams was afraid of incriminating
herself for signing a false recantation.

“I have no idea what her motivation is,” Lott told attorneys in deposition.

In August 2015, English and Powell were arrested following the rape of a Columbia, South Carolina woman after being individually interrogated for hours without a lawyer or a parent present, according to court records.

They both said they were coerced into signing confession documents by Clarke, according to affidavits.

Neither of the interrogations were recorded or filmed – part of an investigation criminal justice expert Melvin Tucker called “shoddy, incomplete, and biased.”

English and Powell were charged on August 5, 2015 with first-degree criminal sexual assault and first-degree burglary. At the age of 16, Kewon English was jailed for 10 months from August 2015 to June 2016.

Both men remained behind bars even after DNA results linked the crime to another person – Marquise Randolph – who was eventually charged in April of 2016.

As the only officer present during the allegedly coerced confessions, Clarke played a central role in this case.

With no physical evidence, the case against Powell and English relied entirely on their confessions. And with no audio or video recording of the interviews, it was their word against Clarke’s.

Charges were eventually dropped in the case due to lack of evidence.

Clarke is currently a sergeant with the Special Victims Unit in Richland county. He has a checkered history including several allegations of misconduct during his law enforcement career.

In the latest court filings, Powell and English’s attorneys argued that qualified immunity – which protects government officials from liability in civil lawsuits – should not apply in this case.

The attorneys claim that there is a “culture of misconduct and coverup” at RCSD.

“Its recent history of overlooking and covering up misconduct by deputies is well-documented in the public record,” plaintiffs’ attorneys wrote in the motion.

The motion named several recent incidents showing misconduct in the department, including: Jamel Bradley, an SRO with RCSD accused of sexually assaulting multiple children; Kyle Oliver, former RCSD officer who was shown on video grabbing a black woman by the hair and throwing her to the ground, Ben Fields, and others.

In a motion filed in opposition of the sheriff department’s request for summary judgement in October, attorneys for the plaintiffs requested a jury trial.

We will continue to keep a close eye on this case. Stay tuned..