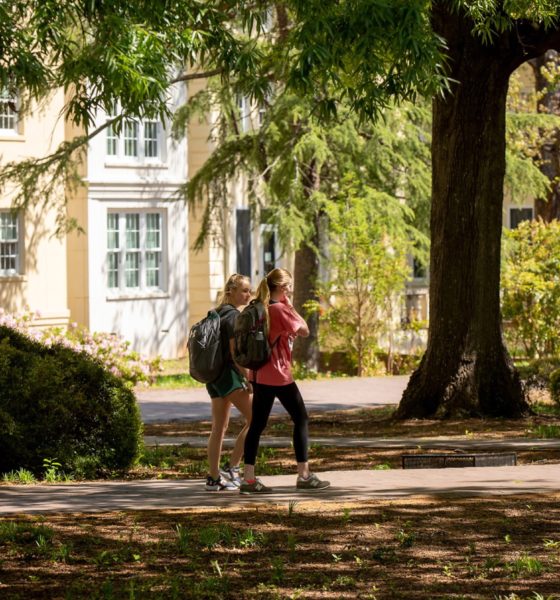 In just one day, COVID-19 cases at the University of South Carolina (USC) doubled after 191 new positive cases were reported Wednesday, president Robert Caslen said in a town hall meeting with faculty Thursday.

The university ramped up its COVID-19 testing efforts this week with its new saliva testing that produces results within 24 hours, Caslen said. Before this week, the university was testing between 600 and 1200 students a day with around an 8.8 percent positive rate.

On Wednesday, USC tested 1301 students and faculty members and 191 of those tests yielded positive results (14.5 percent positive), Caslen said. These numbers have not yet been added to the USC COVID-19 dashboard. Before Wednesday, the university recorded a total of 189 active coronavirus cases since Aug. 1.

Caslen said “a lot of the cases” are coming from the Greek Village.

“We will now quarantine an additional three sorority houses and will likely quarantine more before the end of the week,” he said.

He did not say which Greek houses were in quarantine.

Caslen said he was concerned with the new numbers, but the rise in cases was predictable. He said about 1.5- 5 percent of the student population will likely be positive with no symptoms and they hoped the testing would identify many of those students and stop them from spreading it.

Officials said that many of the cases they were seeing at USC were asymptomatic.

Caslen said he was “not ready to pull the plug on resident education,” but the university “cannot sustain” 191 cases a day.

“I will certainly pull the plug if I have to,” Caslen said.

He has asked USC officials to look at shutdown options for the campus. Caslen said he was not a fan of shutting down and did not want to do it.

“I’m not ready to throw this problem onto the back of the community, this is a problem that belongs to us and we have the resources to deal with it,” he said.

Caslen said USC officials broke up four parties this weekend and they plan on cracking down more on parties to prevent further disease spread. He said the university will suspend students who are hosting parties.

He said the university was working on contract tracing with each case to effectively identify, test, and quarantine more cases.

As of yesterday, only 12.6 percent of the designated space on campus for quarantined students was in use.

What’s up with DHEC’s numbers?

The cases reported by USC show a disconnect with the South Carolina Department of Health and Environmental Control’s daily COVID-19 report.

SCDHEC reported 424 new COVID-19 cases Thursday in the entire state of South Carolina — with 71 of those cases in Richland County.

Earlier this week, Post and Courier reporter Avery Wilks confirmed with DHEC that USC’s tests will be counted in the agency’s daily testing report.

However, USC reported 288 cases between Tuesday and Wednesday and SCDHEC only reported a total of 148 cases in Richland County for that same time period.

It appears that SCDHEC’s report is lagging behind. FITSNews has reached out to SCDHEC officials to get clarity on this.

South Carolina’s COVID-19 testing efforts have been insufficient throughout the pandemic — and state leaders have outlined a plan to change that.

Though South Carolina increased its coronavirus testing when cases started to surge in June, S.C. Department of Health and Environmental Control (SCDHEC) officials are still failing to provide widespread and timely testing to properly mitigate and eventually suppress the virus, according to a report by senators in the Reopen S.C Testing and Tracing Subcommittee.

For starters, the senators are proposing a plan to dramatically increase SCDHEC’s COVID-19 testing goals to test 10 percent of the population— or 500,000 residents — every month.

Senators outlined a plan for SCDHEC to improve its COVID-19 testing numbers. In the plan, the subcommittee recommended that SCDHEC spend the money from CARES Act funding on developing and implementing saliva testing across South Carolina, like the testing now available at USC.

Saliva testing would be a faster, cheaper, and more efficient way to achieve testing goals across South Carolina, according to the report.

The Palmetto state’s testing has trended downward since mid-July.