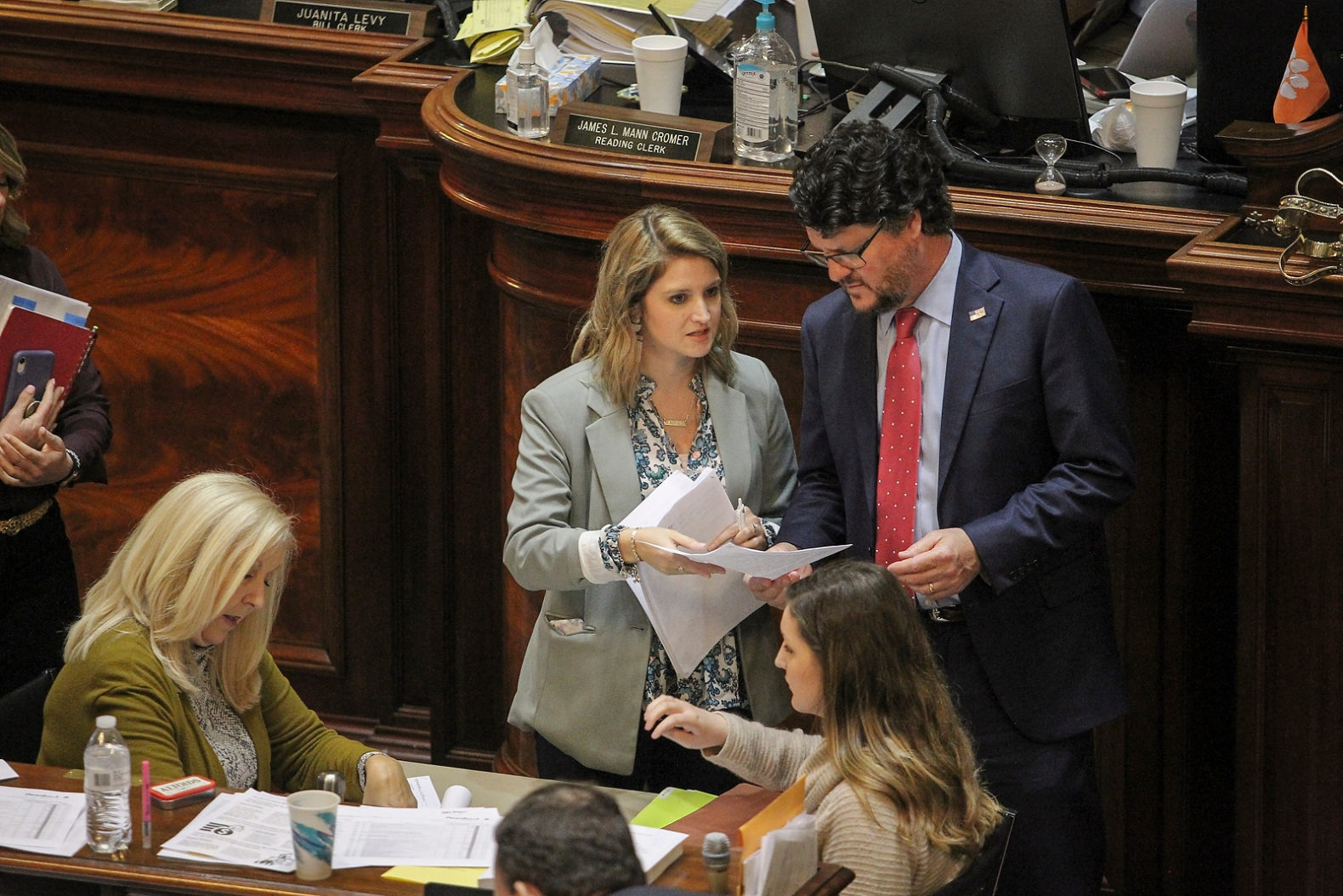 by JONATHON HILL || There’s someone I’d like you to meet.

He’s the man responsible for the gas tax hike that didn’t fix the roads. The architect of the Carolina Panthers billionaire boondoggle. The one who had me kicked out of my own caucus for trying to advance constitutional carry legislation.

And, he’s the man behind the political campaign of my opponent, Vaughn Parfitt.

I’ve watched him up close for the past six years. Over and over again, I’ve documented and confronted the lies and distortions he uses to get his way in politics.

“Slick” Simrill plays a long and corrupt game. While he’s been plotting my political demise for years now, there’s another story that illustrates the point even better.

It’s the story of our roads.

Have you ever wondered what the state did to screw up our roads so badly?

In 2005, the legislature passed a fairly obscure bill that “laundered” millions of dollars through the S.C. Department of Transportation (SCDOT) to be used for loans to build massive new road construction projects, causing basic road maintenance and repaving to grind to a halt.

Almost no one in the State House that day appears to have given it a second thought, except for the three brave souls who voted against it (sound familiar?) …

Governor Sanford had this to say about the bill:

Dear Mr. Speaker and Members of the House:

I am hereby vetoing and returning without my approval H. 3296 (Word version), R. 202, a Bill that redirects certain state funding to the South Carolina Department of Transportation (SCDOT) for maintenance on non-federal highways. There are several reasons for my decision.

First, this legislation represents a problem in the budget going forward. The Board of Economic Advisors estimates this Bill would ultimately shift revenues from the General Fund by about $85 million a year to the SCDOT budget. Unfortunately, no plan was included as to how to address this decrease in other areas of the budget.

An example is the Briggs-DeLaine-Pearson Bridge to be built between Lone Star and Rimini. This proposed project would be built over the Sparkleberry Swamp, one of the last pristine hardwood bottomland swamps. Meanwhile, there is a bridge six miles away in need of repair, but we do not have sufficient funds to provide the improvements. We have asked for a cost-benefit analysis of the proposed new bridge, because it will be state dollars that will ultimately be needed to maintain the structure.

Third, we have consistently advocated that any increase of funding should come with an increase in accountability. In 47 other states, the Department of Transportation is directly accountable to the Governor – either through appointment of the agency head or appointment of all of the commission or board. In the 1991 report entitled Modernizing South Carolina State Government for the Twenty-First Century by the South Carolina Commission on Government Restructuring, co-chaired by then-Lieutenant Governor Nick Theodore and now-Speaker David Wilkins, the commission recommending making the Department of Transportation a cabinet agency. We believe any proposed increase in spending should come with reforms that increase accountability directly back to the voters of the State.

The agency’s lack of accountability is not unique in our history. In 1935, Governor Olin D. Johnston actually declared the DOT to be in rebellion against the State and sent the South Carolina National Guard to occupy the agency. Little has changed about this island of government seventy years later and we believe the people should enjoy more accountability from an agency which represents 10 percent of the total state budget.

While we share concerns about the condition of roads, particularly secondary roads, in the State, we may very well be throwing good money into a flawed system. I would encourage the legislature to sustain this veto and come back next year after we understand better where we should focus our efforts on the agency. In addition, I will not sign any legislation providing more funding to the SCDOT without giving a far greater degree of accountability of the agency back to the taxpayers.

For these reasons, I am vetoing this Bill.

1. The legislature knew that SCDOT mismanagement was rampant all the way back in 2005.

2. The legislature knew that SCDOT should not be trusted with more funding.

3. The legislature knew that Act 176 would create future budget problems.

… but the legislature didn’t listen to Sanford, who turned out to be a prophet.

Through the next decade, the bill created a deficit which was magnified by the 2008-2009 recession, to the point that SCDOT filled the hole (pun intended) with funds that were supposed to be spent on road maintenance.

Much like not repairing a leaking roof, that decision to stop maintaining the roads got very expensive, very fast.

It will be at least another decade before we recover from the destruction caused by Act 176.

By 2015, the chickens were coming home to roost.

Meanwhile, “Slick” Gary Simrill got a promotion, and became the new Republican Majority Leader in 2017.

He was in turn propped up by Jay Lucas, the new speaker of the House after disgraced speaker Bobby Harrell was indicted for corruption in 2014.

Simrill’s very first act as majority leader was to transform the House Republican Caucus’ whips committee into a squad of political enforcers.

He didn’t even try to hide the fact: In his very first caucus meeting as the new majority leader, Simrill announced that the caucus whips would become “thermostats rather than thermometers” – an ominous statement that harkened back to the heavy-handed way Harrell used to run the State House.

This move set the stage to ram the wildly unpopular gas tax hike through the legislature. Those who didn’t fall for his smooth sales job outright were bribed, browbeaten, and cajoled until they fell in line.

Simrill promised the gas tax would “fix the roads.”

Simrill promised the new gas tax money would be tightly locked away, and out of reach of any politician who might want to use it to build some major new highway through their district.

Like Sanford, I warned that this wouldn’t fix the roads, and I voted NO.

(They didn’t listen to me either).

You’d think that three years of the roads not getting fixed would be enough to prove my point in Columbia.

Nope. In the 2020 budget, the House doubled down on stupid by giving Transportation Secretary Christy Hall a whopping $60,000 pay raise.

Of course, I suggested that the people of South Carolina might want to see some potholes fixed first, and tried to rescind the pay raise.

But “Slick” Gary Simrill and his minions blew their lids in collective moral outrage. “How dare you personally attack Christy Hall! She is the best Transportation Secretary this state has seen in decades!” they said.

The Face of Corruption

So, who were the key legislators responsible for Act 176, the act that destroyed our roads?

It’s an interesting list: The first was indicted for corruption and removed from office, and the second resigned. The last two got promotions and now lead the State House.

Despite his title as Majority Leader of the Republican Caucus, Simrill is not a conservative. He is a liar. I’ve exposed his lies over and over again.

Following the gas tax vote in 2017 and the 2018 primary elections, “Slick” Gary Simrill declared political war on me personally. He escalated this political conflict throughout last year:

So you see, Vaughn Parfitt didn’t get into this race against me by accident.

And now, the lies coming out of Vaughn Parfitt’s mouth every day sound eerily familiar.

I didn’t pick this fight with him. I just did my job – to represent my district with integrity – instead of letting “Slick” Gary Simrill push me around like so many others do. I owe the people I represent that much at least.

This 2020 Republican primary race between me and Vaughn Parfitt presents District 8 with a choice. It’s a choice between one who will expose and resist corruption, and one who is the handpicked puppet for “Slick” Gary Simrill: The very face of corruption in Columbia.

What will the next decade bring, if the voters ignore the man behind the curtain?

Jonathon Hill is … (submitted bio) a stalwart defender of liberty and has been a driving force behind defunding Planned Parenthood, reforming civil asset forfeiture, and defending our Second Amendment rights. His positions are sometimes an irritation to his less enthusiastic Republican colleagues. In 2008, Rep. Hill entered politics as a campaign volunteer, and shortly after started the Anderson TEA Party. He has served in the House since 2015 and is the Second Vice Chairman of the Medical, Military, Public and Municipal Affairs Committee. Among his political maxims: “Every act of government is an act of force, and should be used sparingly.”

Born in Anderson, S.C., Jonathon was home educated in the rural upstate town of Donalds. He skipped college, taught himself software development, and achieved professional success at tech firms from Atlanta to Silicon Valley. Jonathon and his wife Amanda live in Townville, SC with their dog, Argos, and parrotlet, Cora.