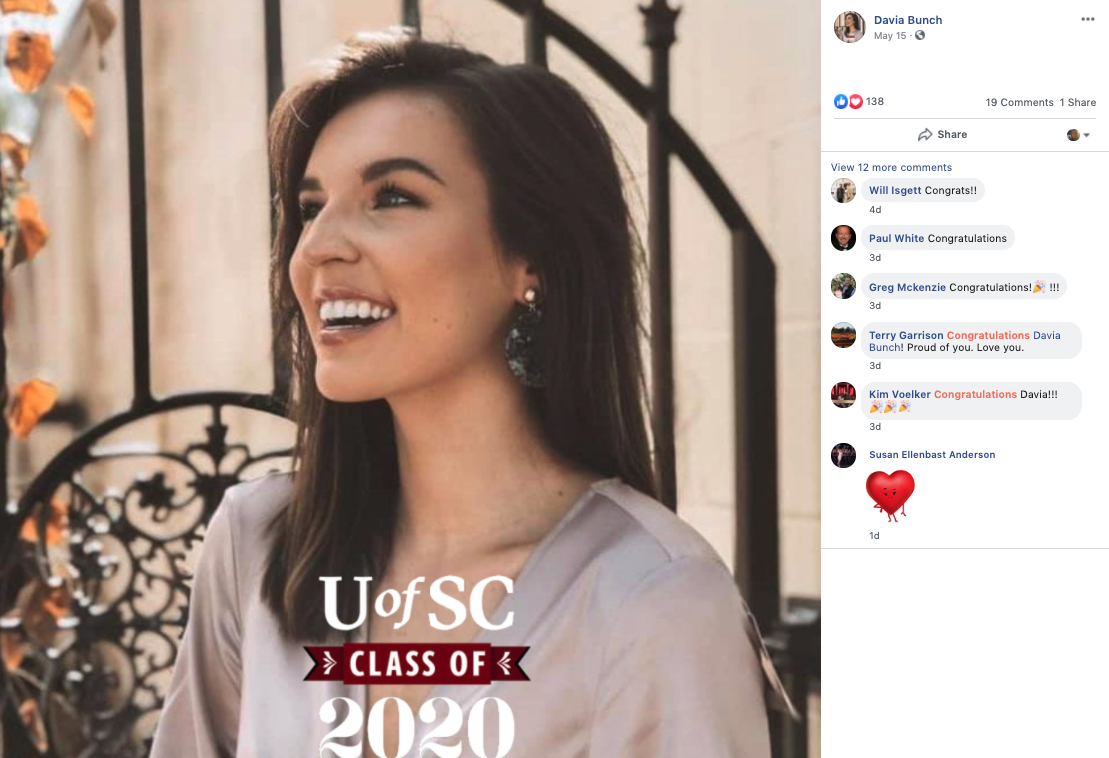 A pageant queen from Spartanburg, South Carolina recently filed a class-action lawsuit demanding tuition and fee refunds for University of South Carolina students who missed out on campus activities and learning experiences after classes moved online due to the COVID-19 pandemic.

Davia Bunch, a graduating senior who was crowned Miss South Carolina 2018, filed the lawsuit against the University of South Carolina on May 13 in the Richland County Court of Common Pleas on behalf of other USC students.

According to the lawsuit, USC refused to refund a portion of tuition and fees students paid for benefits and services they never received after classes were cancelled in March when coronavirus began to spread in South Carolina.

“Although closing campus and transitioning to online classes may have been prudent, this decision deprived (Bunch) and other members of the classes from recognizing the benefits of in-person instruction, access to campus facilities, student activities, and other benefits and services in exchange for which they had already paid fees and tuition,” the lawsuit said.

USC has not adequately refunded students for the services they paid for, the lawsuit claims. According to the State newspaper, the University of South Carolina started refunding students in April for meal plans, parking permits and on-campus residential housing.

The lawsuit “seeks refunds of the amount (Bunch and other students) are owed on a pro-rata basis, together with other damages.”

Bunch, a senior studying political science, paid over $6,000 in tuition and more than $200 in fees, the lawsuit said.

The students did not choose to attend an online-only university, the lawsuit said, so they should be compensated for missing out on the benefits of an in-person college experience.

The lawsuit points to a 2018 Brookings Institute study that “provides evidence that students learn less in the online setting. The study found:

The lawsuit also mentions the “collegiate experience” the students missed out on this semester including interacting with other students and professors, networking, and extra-curricular social activites.

“Bunch’s education has involuntarily been transitioned from in-person, hands-on learning to online instruction,” the lawsuit said.

Before the pandemic, USC charged less for online classes, the lawsuit said.

The lawsuit also argues that students haven’t been able to access the facilities they paid for this semester, such as the rec center and campus WiFi.

Considering the University of South Carolina’s $1 billion endowment, coupled with the fact that it has received $21,415 in federal stimulus from the CARES act, USC should refund the students, the lawsuit claims.

The lawsuit did not mention that the University of South Carolina lost an estimated $30 million to $40 million in the COVID-19 pandemic, as founding editor Will Folks reported earlier.

The class action suit is asking that USC relinquish the money “wrongfully detained for tuition and fees” to Bunch and University of South Carolina students.

A jury trial has been requested.

The lawsuit is one of many in a growing trend across the U.S. where students are suing colleges for compensation due to campuses closing during the coronavirus crisis.

“If your college or university has closed its campus due to COVID-19 and you still paid the bill for an on-campus experience when you were taking online classes, you may be entitled to a refund,” the website says .

“These cases are about basic fairness,” Roy Willey, of the Charleston-based Anastopoulo Law Firm told the Pittsburgh Post Gazette. “Colleges and universities are not unlike any other business in America, and they too have to tighten their belts during this unprecedented time…They are not any more entitled to keep money for services they are not delivering than the mom and pop bakery on Main Street.”

But do these students have any chance of winning?

In a recent Forbes article, several law experts said it’s generally difficult to go up against universities in court.