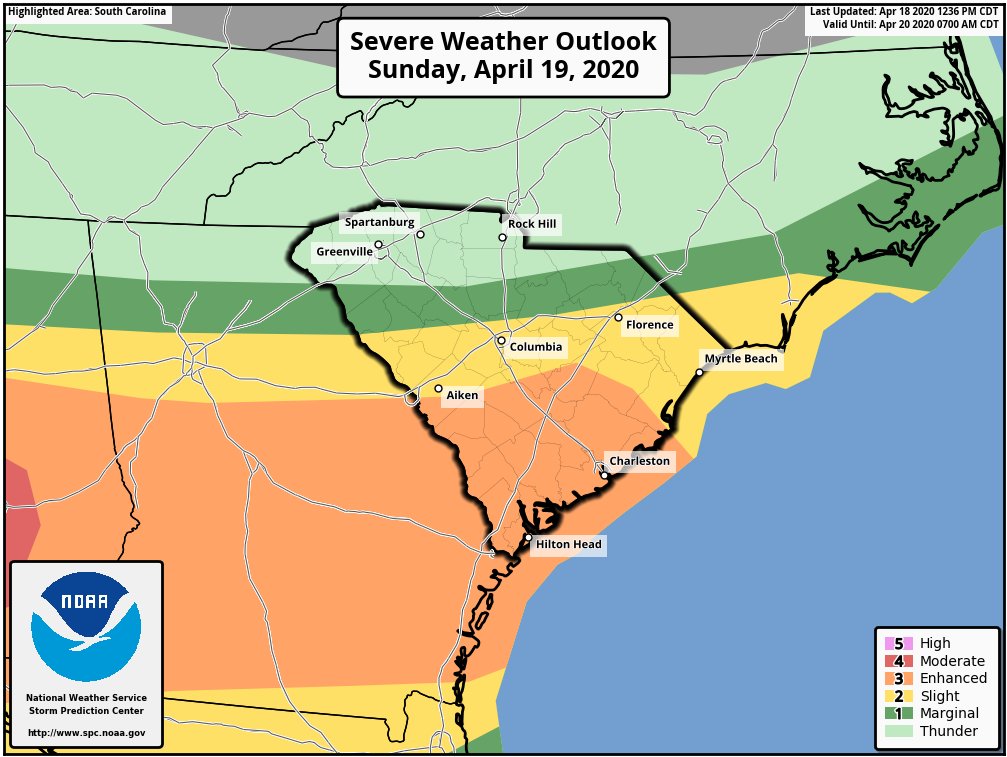 Get ready, South Carolina, another round of severe storms could be heading our way tomorrow.

Less than a week after 12 tornadoes tore through the state, meteorologists are calling for heavy rainfall, severe thunderstorms, flash flooding and near-hurricane-force wind gusts in mostly the lower half of South Carolina, according to AccuWeather and National Weather Service forecasters.

Isolated thunderstorms could hit parts of the state beginning Sunday afternoon, according to the National Weather Service. Similar to last week’s storm system, the worst of it is likely to hit between Sunday night and Monday morning. The region rocked by storms last week such as Hampton and Orangeburg counties are unfortunately in the highest areas for risk in the state tomorrow, the National Weather Service (NWS) in Columbia said.

“Every event is different but it does seem as though the environment is supportive for significant severe thunderstorms and isolated tornadoes,” officials at the National Weather Service in Charleston said when asked how this event compares to last week’s.

According to the National Weather Service, the lower half of the state has the highest risk for tornadoes on Sunday night. The Lowcountry could see 60 mph winds in this event, in addition to tornadoes, according to meteorologists.

“The main hazard expected is damaging straight-line winds but isolated tornadoes/waterspouts can’t be ruled out,” the NWS Charleston alert said. “This could lead to some downed trees/power lines as well as property damage, especially given the heavy rain and resulting
wet ground conditions.”

Heavy rainfall is also expected from the Lowcountry to the Midlands. Between 8 a.m Sunday and 8 a.m. Monday, forecasters are calling for 2.5 to 3 inches of rain, with the highest amounts falling from central savannah River Area and southeastern Midlands.

The severe weather is expected just a week after nine people died in storms Monday morning in Hampton, Orangeburg, Colleton and Oconee counties Monday. Meteorologists have recorded 12 tornadoes across South Carolina during that event.

Hampton County was likely hit the hardest in the event. Five people lost their lives in the storm, including a family of three. ABC News reported that 60 people were injured in the Hampton County tornado Monday.