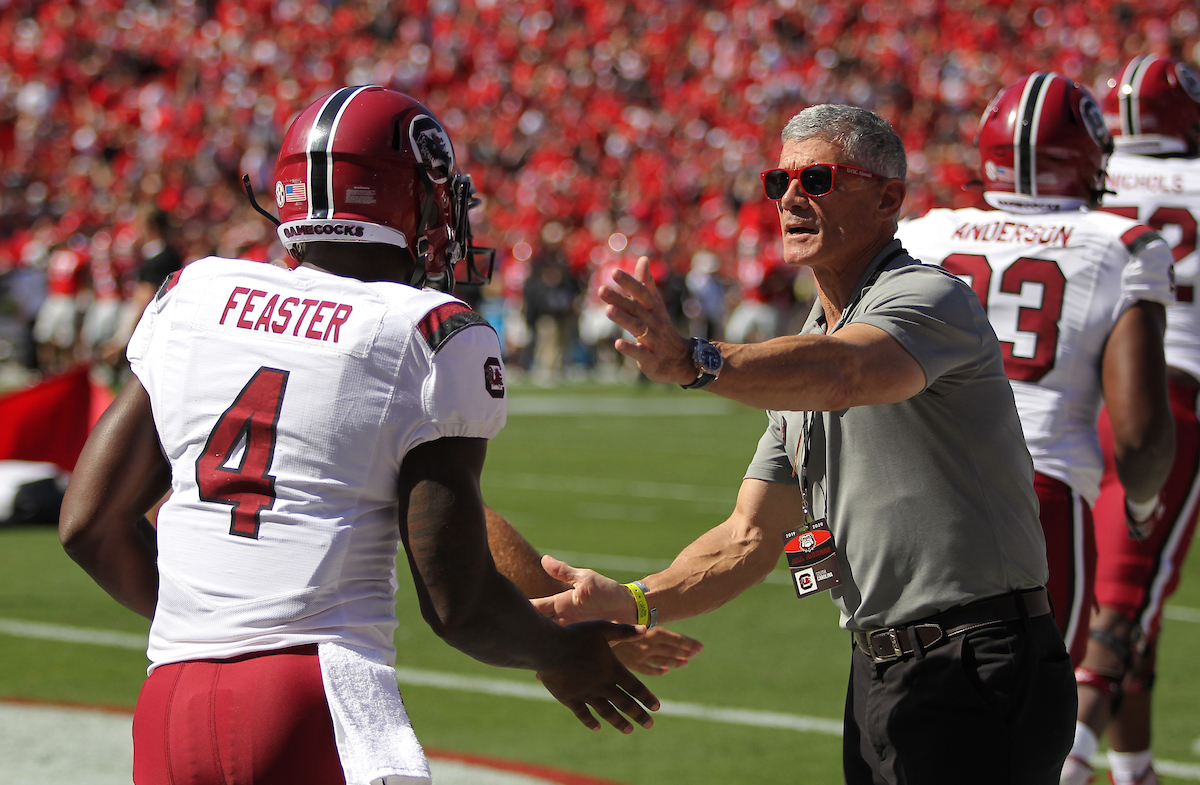 Earlier this season, the University of South Carolina and its underperforming athletics department were able to deflect attention away from the atrocious state of the Gamecock football program by bashing the media (and not without reason).

Then a shocking upset of No. 3 Georgia (on the road, no less) seemed to open the door to possibilities previously unimagined …

Suddenly, a season which looked lost had been found … and when the Gamecocks entered the fourth quarter against No. 9 Florida with a 20-17 lead it seemed as though beleaguered head coach Will Muschamp’s program was on the verge of an expectations-defying turnaround.

Needless to say, it was not meant to be … at all.

The Gamecocks collapsed against Florida (again) and proceeded to lose three of their next four games to fall to 4-7 on the year … a skid punctuated by an embarrassing home loss to Appalachian State and a humiliating defeat on the road against Texas A&M.

The lost season that had been found was suddenly lost again … dead, actually … and this time the recrimination emanating from long-suffering Gamecock fans was uncharacteristically unabating in its intensity.

Even before Muschamp’s team (well, its offense) laid down and died against the Aggies in College Station, Texas last weekend – the inevitable detritus accompanying the death of the 2019 South Carolina football season was beginning to rise to the surface.

There was well-placed chatter about removing embattled athletics director Ray Tanner … a development which prompted denials from those said to be in on the plot as well as a show of support for Tanner from an influential member of the university’s badly divided board of trustees. In turn, Tanner made it clear that he remained 100 percent supportive of Muschamp – a pronouncement that was greeted less-than-warmly by the Gamecock fan base, which tends to be reflexively loyal even in the face of abject mediocrity.

After the disaster at Kyle Field, though, things have continued to spiral downward.

Late Monday, reporter Scott Chancey of The Florence (S.C.) Morning News published an article containing an interview with South Carolina president Robert Caslen – who was narrowly selected by the school’s trustees in July after extensive political meddling by S.C. governor Henry McMaster and his allies.

Caslen reiterated his support for Muschamp, calling him “my coach, period” and affirming that he would “remain my coach.”

Questioned further as to whether Muschamp would remain in his favor after a presumed blowout loss to arch-rival Clemson on November 30, Caslen offered what sounded like a qualifying endorsement of the struggling 48-year-old coach with the massive $22 million buyout.

“If we’re totally imploding and no one shows up, I’d say we’ll have a discussion,” Caslen (above) said. “But there’s no desire intended to make a change.”

That was not the real bombshell, though.

According to Chancey, he asked Caslen whether the new president had spoken with officials at Florida State University about handling the massive $18 million buyout associated with the school’s firing of second-year head coach Willie Taggart earlier this month.

“No, but our athletic director (Ray Tanner) has,” Caslen allegedly responded. “And they’ve got a whole lot more money in their athletic endowment than we do. I know that, for a fact.”

Moments after Chancey’s story was published, South Carolina’s athletics department passed along a statement from Caslen disavowing the report.

“Let me set the record straight: Athletics director Ray Tanner did not speak with anyone at Florida State University about coaching contracts,” Caslen said, according to the statement.

Aside from contradicting the quote allegedly provided to Chancey hours earlier (i.e. calling the reporter a liar), Caslen’s statement is very narrowly worded – begging the question of whether Tanner had some contact with Florida State after all.

As for The Morning News, it doubled down on Chancey’s reporting.

“We have reviewed the recording and stand by our report,” the paper’s sports desk tweeted.

Clearly the rampant dysfunction that is paralyzing the University itself has now spilled over into its athletics department – which was already doing its best impression of a four-alarm dumpster fire before Caslen decided to get involved.

Now the flames have been fanned even further … putting Muschamp in an even more untenable position than before (if that can be imagined).

Frankly, all of this is getting to the point where it seems as though a complete and total housecleaning is the only thing that can save the school – and yes, that housekeeping must include the politically appointed board members who chose these three blind mice and lavished huge contracts/ extensions upon them.

In other words, it is time to get rid of Muschamp, Tanner, Caslen and the board of trustees … no matter how much it costs.