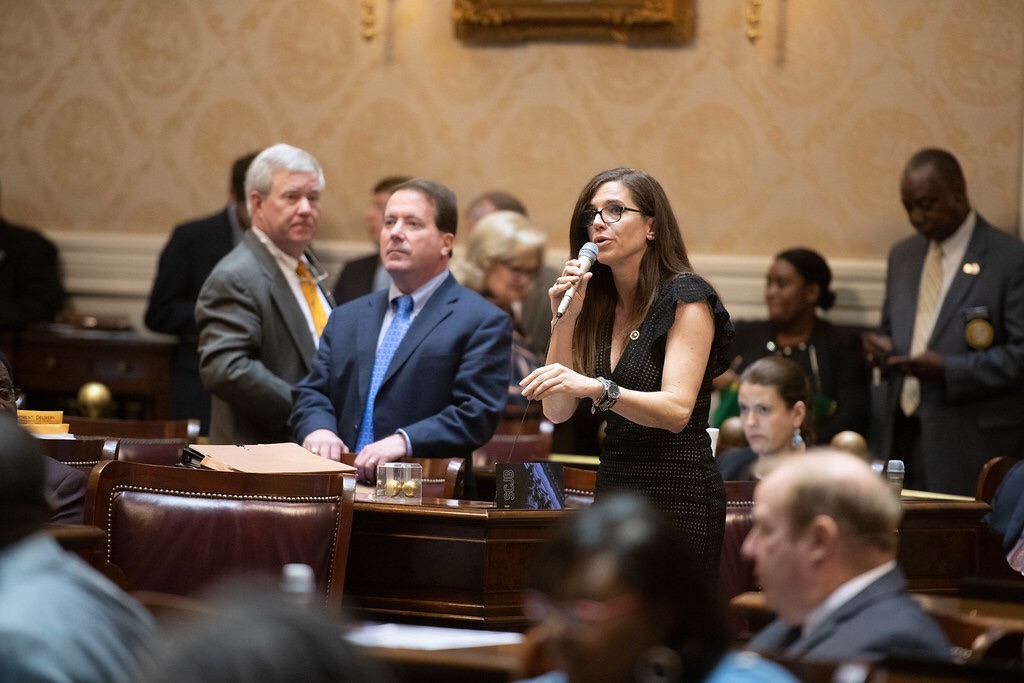 In a recent post discussing the potential entry of a new prospective candidate into the race for South Carolina’s first congressional district, this news outlet referenced local sources as saying there was “no clear frontrunner for the (GOP) nomination” and that the Republican battle for the right to challenge Democrat Joe Cunningham for this seat was “wide open.”

Apparently, state representative Nancy Mace has something to say about that …

Mace, 41, is hosting a fundraiser this week in Charleston, S.C. that is likely to provide a significant boost to her campaign coffers.

The second-term state lawmaker from Daniel Island, S.C. is hosting a reception on Thursday night at Hall’s Signature Events (5 Faber Street) – one that boasts a lengthy list of sponsors ($2,800 donors), benefactors ($1,000 donors) and contributors ($500 donors).

Mace is looking to fill her war chest in anticipation of a competitive primary battle with Mount Pleasant, S.C. town councilwoman Kathy Landing. The 56-year-old financial advisor has committed a quarter of a million dollars to her campaign … so far. That influx has propelled her to an early lead in the all-important money race for this seat.

Mace has a decisive lead over Landing in terms of the money she has raised, however, a lead she appears likely to extend based on the response to her latest event.

“Over two hundred RSVPs,” one of Mace’s top donors told us.

It has been quite a week for Mace (above), who crashed a press conference held by Cunningham last week on the issue of offshore drilling.

After standing alongside Cunningham and fellow offshore drilling opponents – including governor Henry McMaster – Mace criticized Cunningham’s approach to the issue, arguing it was up to the state (not the federal government) to take the lead on this issue.

That position was ripped by columnist Brian Hicks of The (Charleston, S.C.) Post and Courier – a news outlet which has been firmly ensconced in Cunningham’s hip pocket ever since he emerged on the state’s political scene two years ago.

And firmly ensconced in the hip pocket of the eco-radicals …

To his credit, though, Hicks was smart in his criticism of Mace – saying her argument about the separation of powers didn’t “hold water.”

“The state’s jurisdiction extends only a few miles into the Atlantic Ocean, and offshore drilling and seismic testing would take place in waters that only the federal government could control,” Hicks wrote. “In other words, the state has no say in what happens out there.”

Is he correct? Yes, geographically … although we believe he and his colleagues are short-sighted in their unilateral opposition to drilling (and especially their opposition to testing that would determine how much oil and gas is potentially recoverable).

But that is another story …

Democrats were far less adept in their criticism of Mace, saying she “supports offshore drilling” – a demonstrable falsehood.

“Yeah, that’s not true,” Hicks pointed out, adding “those facts are easy to check.”

Actually, Democrats were dumb to hit Mace on this issue at all … as it afforded her an opportunity to play the ‘frontrunner card’ (i.e. the ostensible reason for the attacks against her) and apparently the ‘woman card’ as well (although we aren’t entirely sure what that was about). What we are sure of is that this entire exchange only benefits Mace as she makes her case to GOP voters.

Mace’s decision to attend Cunningham’s press conference – and then speak out against his efforts on offshore drilling – could have been a disaster for her candidacy. But Democrats failed to heed the tactical maxim of Napoleon Bonaparte (or was it Sun Tzu?) who warned military leaders to “never interrupt your enemy when they are making a mistake.”

Not only did Democrats interrupt Mace’s mistake, they compounded the error by making a mistake of their own … all while telegraphing the perception that she is the GOP frontrunner (and the candidate against whom they do not wish to campaign).

Seriously … between Cunningham’s inept advisors and his wife Amanda Cunningham (who recently complained about her government-provided health care), the first-term congressman is looking more vulnerable by the day.

Anyway, for those of you interested in attending Mace’s event at Halls is scheduled for this Thursday (September 19, 2019) between 5:00 – 6:30 p.m. EDT. For more information, click here.