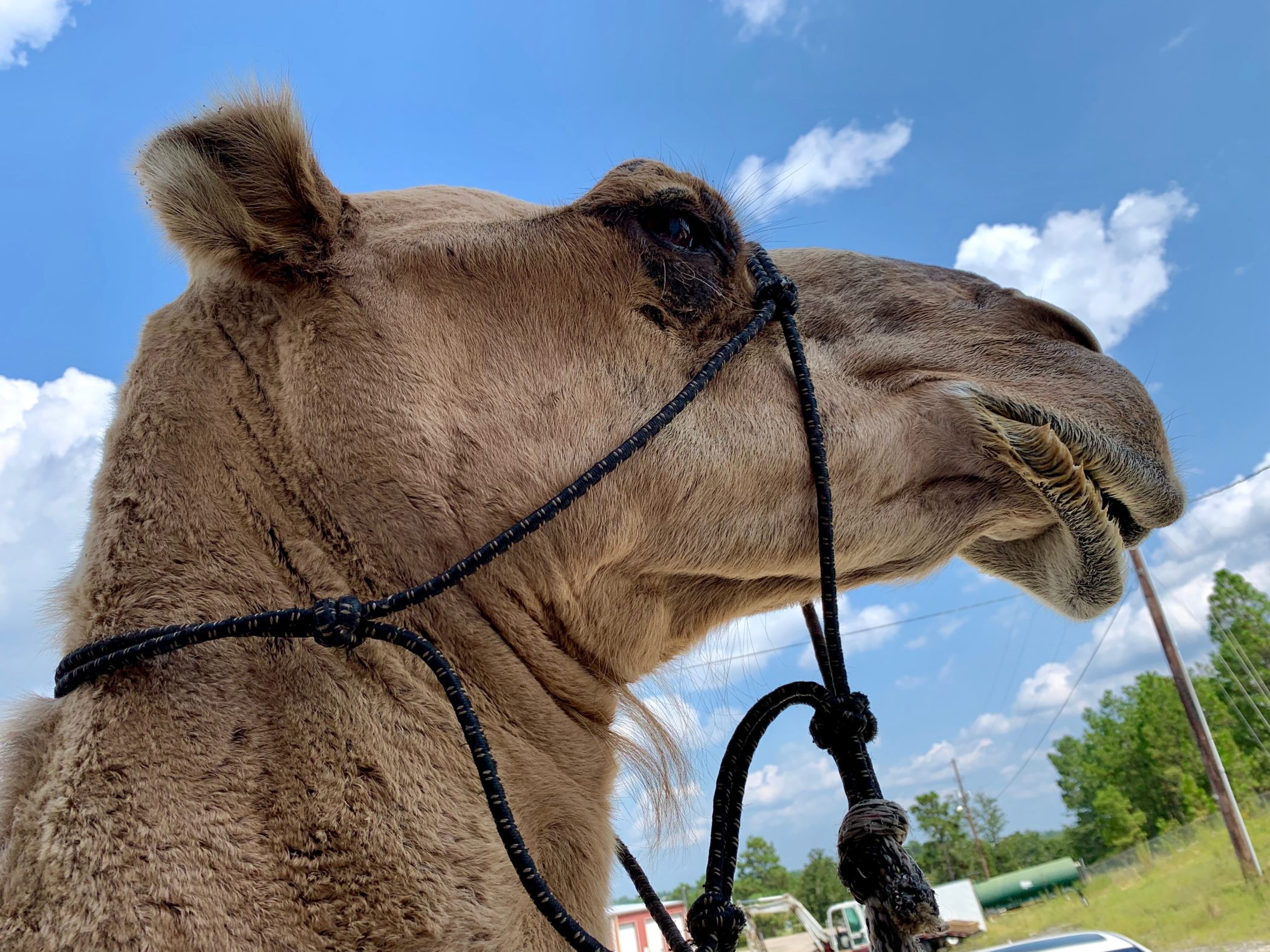 A few weeks ago, this news outlet ran an item after one of our readers spotted a camel being transported through Lexington County, South Carolina in what appeared to be a government-provided vehicle.

In our zeal to protect taxpayers, we questioned whether public monies were being appropriated on the animal’s transfer.

Good news: They weren’t … apparently, even the gasoline used to move this massive beast is paid for exclusively with private funds.

Better news? A wonderful story awaited our founding editor Will Folks, who was invited last weekend to meet the camel in question – a 23-year-old, Mountain Dew-drinking dromedary named Abraham.

Joined by three of his six children, Folks traveled to Red Bank, S.C. – the home of Clifford Fisher and Margaret Fisher, Abraham’s owners. A sprawling 55-acre farm located a few miles south of Lexington, S.C., the Fishers’ property is home to a pair of camels – Abraham and Preacher, who was patrolling its rolling fields with several of the family’s horses at the time of our visit.

But it was the affable Abraham who stole the show …

“Did you tell the camel I wrote something bad about him?” Folks inquired of Margaret Fisher as Abraham (all 1,876 pounds of him) lumbered toward his exclusive interview with FITSNews’ founding editor.

Folks had done a bit of camel-related Googling prior to this interview … attempting to gauge whether it might be his last. One quote from his research proved particularly disconcerting …

“If you hurt a camel he will never forget you and he’ll do his best to get you,” world renowned animal psychologist Ali Al Ameri said in one of the articles we uncovered. “And eventually, if he can, he will kill you.”

The first thing you notice about this particular camel – who stands seven feet tall at his hump and whose head can extend nearly ten feet off the ground – is that he is big.

Towering, even. We saw Abraham at full extension as he downed a Dew (his beverage of choice) prior to the beginning of our interview.

“He can stop anytime he wants,” Clifford Fisher told us, referring to his camel’s well-known affinity for the carbonated citrus drink.

The second thing you notice about Abraham? Like his owners, he’s super nice.

Having heard all the stories about camels and their surly dispositions (the spitting, the kicking, etc.), we were fully prepared to encounter a moody, snippy and altogether unwelcoming beast.

Particularly after we publicly questioned his integrity …

But unlike the vengeance-seeking animals described by Al Ameri, Abraham was every bit as gracious a host as his owners – allowing Folks and his children to get up close and personal with him, petting his coat and posing for pictures.

He didn’t spit once …

The third thing we noticed about Abraham? He’s got multiple eyelids … two with long lashes to keep out grains of sand and a third which wipes away any dirt that might make its way through.

Oh, and that whole “peeing like a camel” thing?

Well, that was the fourth thing we noticed about Abraham …

“He’ll go for a minute or two,” Clifford Fisher told us during an extended interview break. “There goes his Mountain Dew.”

For those of you wondering, Abraham’s “hump” isn’t filled with water (or soda). The camel’s signature feature is a deposit of fatty tissue. Basically, the hump serves as a repository for this fat, which – were it evenly distributed throughout its body – would result in excess insulation and heat retention.

Consolidating the fat in the hump helps keeps the camel cool … one of many remarkable biological features of this fascinating species.

Adopted by Fisher when he was only a few months old, Abraham is the star of a holiday ministry entitled Jesus Is His Name, a free presentation that is held each December at the South Congaree Arena in West Columbia, S.C. As we get closer to the holiday season, we look forward to providing our readers with more information on this presentation (as well as updated showtimes).

We were connected to the Fishers through Kim Cockrell, a victims’ advocate with Mothers Against Drunk Driving (MADD) who works alongside Margaret Fisher, the elected coroner for Lexington county.

Cockrell and Fisher met four years ago as they both worked to help people overcome the trauma of losing loved ones.

“We met through the grief of victims,” Cockrell told us. “It really helps to have someone in your life who understands the love and pain of your profession.”

Cockrell has also bonded with Abraham, who she refers to as her “therapy animal.”

“Looking into that beautiful creature’s eyes calms the world briefly,” she told us.

Abraham is a licensed exotic pet, Clifford Fisher (above, left) told us.

In addition to his star turn each Christmas season, Abraham is a staple at vacation bible schools and other church/ community events. And the Fishers never charge for his appearances, which is commendable.

We are tremendously grateful to Clifford Fisher, Margaret Fisher, Kim Cockrell and (of course) Abraham the camel for making time for our founding editor and his family last weekend.