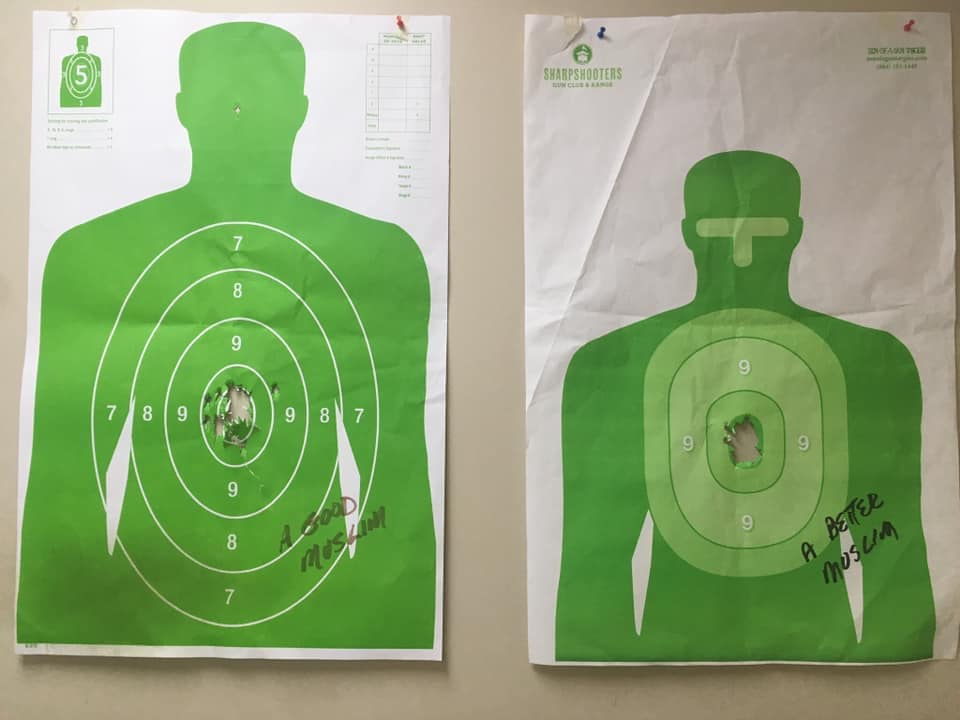 A photograph was provided to this news outlet early Friday morning that was reportedly taken inside an office building in Greenville, South Carolina this week.

Which building? And whose office? We do not know …

The source for the photo would not say …

The image depicts a pair of targets from Sharpshooters gun club and indoor range, located at 1345 Rutherford Road in northwest Greenville. One of the targets featured a grouping of bullet strikes around its center accompanied by the hand-written note, “a good Muslim.”

The second target features the entire center blown out with the hand-written note, “a better Muslim.”

“Despicable,” said Greenville, S.C. businessman David Haskins. “This is 100 percent un-American, and not welcome in my hometown.”

“I’m at a loss for words,” Haskins added.

Left-leaning media outlets might use this as an opportunity to embarrass Sharpshooters – or subject the gun club to the indignity of having to issue some sort of response for the behavior of one of its customers.

That would be like demanding comment from a supermarket after someone scrawled offensive rhetoric one of its grocery bags … or criticizing a coffee house because someone threw one of its paper cups on the roadside.

No, the responsibility here lies solely with the yet-to-be-identified author of the notes.

As for our thoughts on that individual? We agree with Haskins …

There are millions of good-hearted, law-abiding, taxpaying Muslims in this country, and to see people paint them with the same brush is disappointing.

Having said that, we respect the right of the author to his strongly held beliefs – and we respect his First Amendment right to display those beliefs as he sees fit.

Ultimately, it is up to the marketplace of ideas to sort it out …

Related Topics:David HaskinsMuslimsSharpshootersTarget Practice
Up Next

Robert Caslen Chosen To Lead The University Of South Carolina