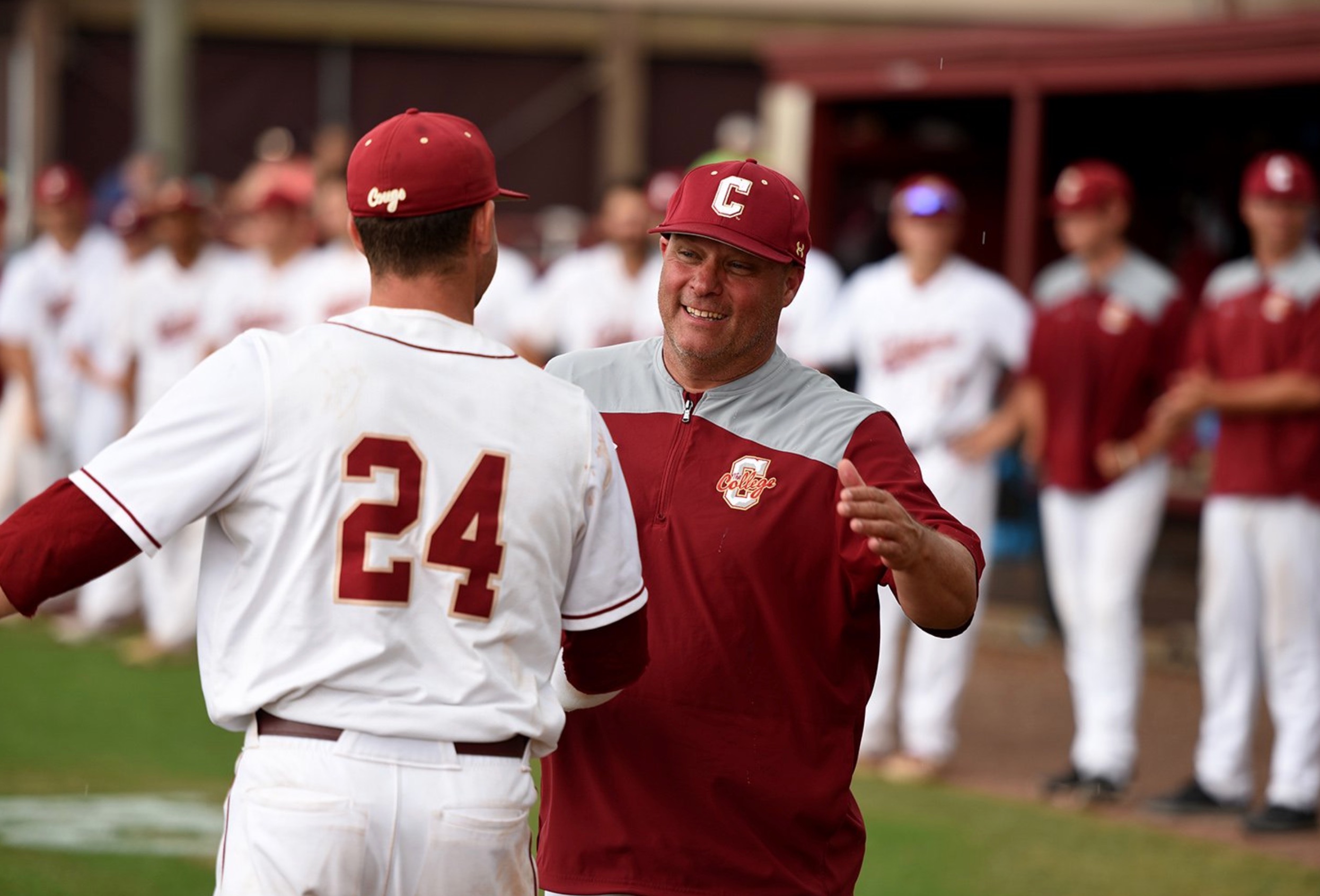 This news outlet has written repeatedly about the ongoing scandal surrounding the College of Charleston, its athletics director Matt Roberts and its second-year baseball coach, Chad Holbrook.

Remember this case? It is the one that yielded seismic allegations of perjury and destruction of evidence related to Roberts and Holbrook – the latter of whom spent five years as head coach at the University of South Carolina between 2013-2017.

Holbrook took the Gamecock program from perennial national championship contender to a middle-of-the-road Southeastern Conference team during his tenure. The program then fell off of a cliff in 2017, right around the time he was allegedly conspiring with Roberts to secure his current job.

Things haven’t improved for the Gamecocks in his absence, either … but they could be getting very bad for Holbrook in the Holy City.

In his second season in Charleston, Holbrook guided the Cougars to a 36-20 record – almost identical to the 36-19 mark posted in his first season on the job. The team failed to qualify for the NCAA tournament in both years.

Late last week, attorneys for the college settled a wrongful termination lawsuit filed in federal court in 2017 by former Cougars’ coach Matt Heath – who is currently an assistant with the University of Tennessee-Martin baseball program.

Heath was fired two years ago to make way for Holbrook …

The former coach will receive $350,000 from the school according to the terms of the settlement, per a report from Andrew Miller of The (Charleston, S.C.) Post and Courier.

Is “all well that ends well,” though?

And even if the parties to this lawsuit are satisfied with its resolution, is this really the end of the saga?

Readers will recall this lawsuit alleged that Roberts and Holbrook conspired to force Heath out as head coach so that Holbrook could be hired – but it was the content of subsequent pleadings that elevated this scandal to a much higher energy level.

According to Heath’s attorneys, Roberts and Holbrook lied under oath in affidavits submitted before federal court – and destroyed evidence related to the case. Specifically, data from a laptop computer was allegedly wiped clean the day after the College of Charleston received a discovery request from Heath’s attorneys.

Roberts and Holbrook have also been accused of deleting messages from their cell phones that Heath’s attorneys insist could have proven the alleged conspiracy.

Even without these messages, evidence uncovered by a forensic specialist was quite damning – especially messages exchanged between Holbrook and his father, Eddie Holbrook, prior to the coach resigning under pressure with two years remaining on his contract at South Carolina.

In a message dated April 23, 2017 – six weeks before he stepped down as South Carolina’s coach – Holbrook told his dad “don’t say anything but Matt Roberts really want (sic) me to come be his baseball coach at the college of Charleston.”

Holbrook added that he was “thinking about it strongly” before reminding his father “please don’t say anything.”

Three days before Heath was fired at the College of Charleston (and five days after Holbrook’s own resignation from South Carolina), he sent another message to his father in which he appeared to allude to Roberts’ efforts on his behalf.

“Hope (M)att Roberts can pull it off,” Holbrook wrote.

Roberts did “pull it off,” naming Holbrook as the head coach at the College of Charleston on July 20, 2017. Before that happened, though, Roberts terminated Heath “for cause” – meaning the school was not paying him the remaining money owed to him under his contract.

At the time, Heath was accused of using “inappropriate and abusive language” toward his players. In one instance, he allegedly grabbed a player by the throat.

Heath claimed the allegations against him were “uncorroborated and false.” He further stated that the school – led at the time by former state senator Glenn McConnell – never gave him an opportunity to defend himself prior to firing him.

In the aftermath of last week’s settlement agreement, fresh messages are being posted to social media raising additional questions about Roberts’ and Holbrook’s conduct.

In one of these messages – dated May 15, 2017 – Holbrook’s father texted him inquiring as to “the latest at Charleston.”

“He text(ed) me today and said let’s make it happen,” Holbrook responded, ostensibly referring to Roberts.

This exchange took place less than three weeks before Holbrook stepped down at South Carolina.

In another message, Holbrook informed his father that while he had “a lot of big time people” lobbying South Carolina athletics director Ray Tanner to keep him in Columbia, S.C., he was still actively pursuing the College of Charleston gig.

“Matt wants to do it,” Holbrook wrote to his father on May 30, 2017, a week before his resignation. “(J)ust waiting to see if they will handle buyout of current coach.”

In yet another message dated June 8, 2017 – two days after his resignation from South Carolina – Holbrook told his father that he and Roberts were continuing to communicate about the Charleston job but needed to “be careful” in their conversations.

“Me and (M)att are still talking,” he wrote. “We have to be careful in our communication because they still have a coach.”

According to our sources, these are just a few of the messages set to be released in connection with this case.

“Others are even more troubling,” one source told us.

Our view? Frankly, we are surprised it took this long for the school to reach a settlement agreement with Heath. We believe court filings have produced extensive, credible information indicating that Holbrook and Roberts conspired to oust the former coach from his job, lied about it under oath and then attempted to cover it up by destroying evidence.

Seriously, it doesn’t take a rocket scientist to add things up after reading these messages …

Actually, a rocket scientist will now have to sort the situation out … namely, new College of Charleston president Andrew Hsu, who took office less than two months ago.

Our advice to Hsu? Clean house …

In the meantime, we will continue to keep our ear to the ground in the event there are any new developments related to this drama.

UPDATE: College of Charleston is sticking with Roberts, Holbrook …