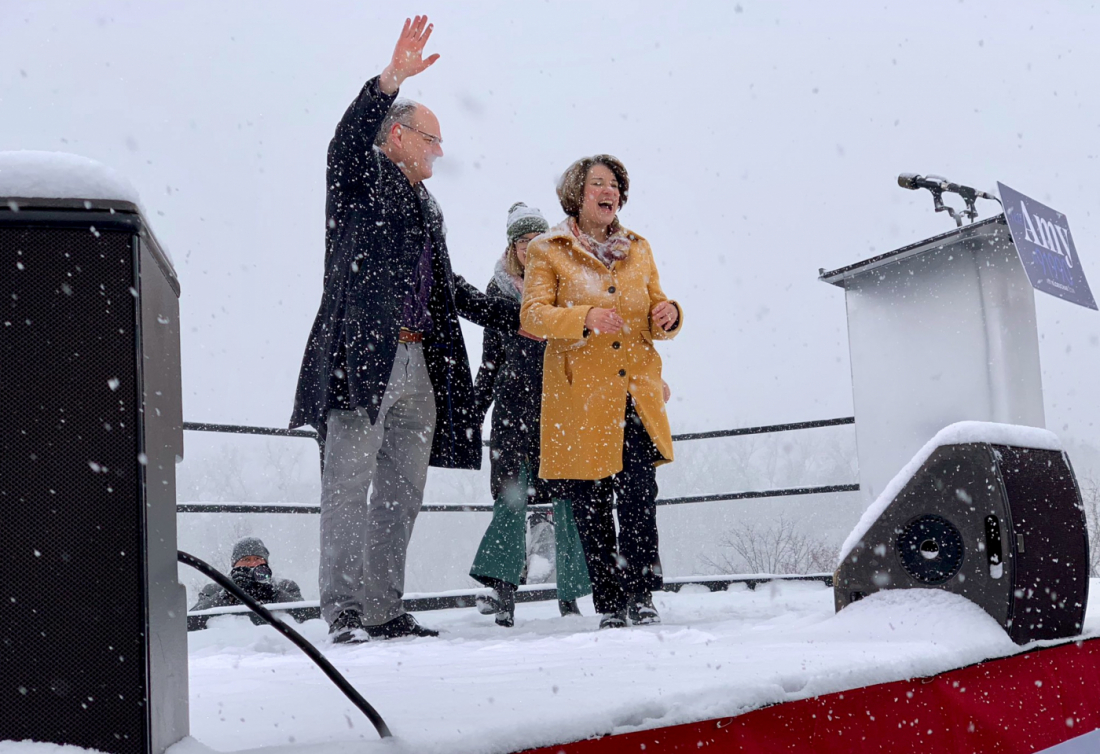 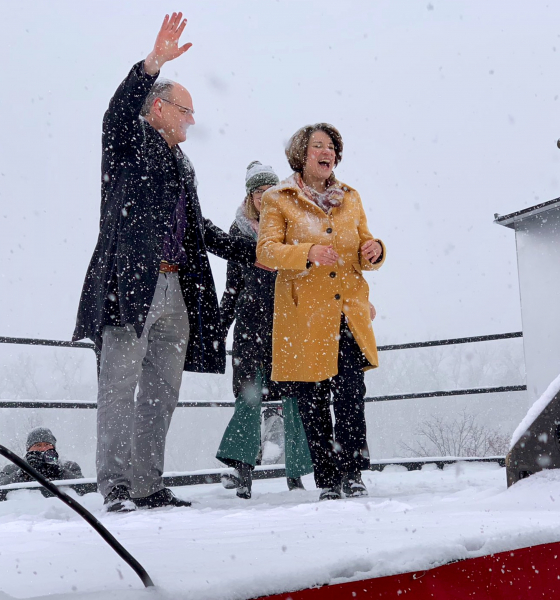 Before any easily triggered liberal readers get their sensibilities offended, “another one” is not a reference to U.S. senator Amy Klobuchar of Minnesota being a woman.

Or even a member of the U.S. Senate …

It simply refers to her being the latest Democratic hopeful to announce a 2020 presidential campaign – which Klobuchar did over the weekend during a driving snowstorm in Minneapolis, Minnesota.  The 58-year-old former prosecutor – first elected to the U.S. Senate in 2006 – joins her colleagues Cory Booker of New Jersey, Kirsten Gillibrand of New York, Kamala Harris of California and Elizabeth Warren of Massachusetts as announced presidential candidates.

U.S. senator Bernie Sanders – who lost a rigged nomination to Hillary Clinton two years ago – is also a likely candidate.  As is U.S. senator Sherrod Brown of Ohio.  Meanwhile, there are at least a dozen other prospective contenders outside of the Senate likely to mount credible campaigns.

Needless to say, the field is going to be crowded …

Klobuchar sought to distinguish herself as a candidate of “grit” by touting her working class roots mid-blizzard on the banks of the Mississippi River, although it was a bit humorous to hear her talk about global warming and her plan to put forward “sweeping legislation to invest in green jobs and infrastructure” as the snowfall enveloped her.

U.S. president Donald Trump – who has been having great fun at the expensive of the 2020 Democratic field – immediately trolled Klobuchar’s speech.

“Well, it happened again,” he tweeted.  “Amy Klobuchar announced that she is running for President, talking proudly of fighting global warming while standing in a virtual blizzard of snow, ice and freezing temperatures.  Bad timing.  By the end of her speech she looked like a Snowman(woman)!”

Klobuchar brushed off the snow … and the criticism.

Klobuchar’s announcement wasn’t without its pitfalls, though – including allegations that she has mistreated her staff in the past to the point of creating a “hostile work environment.”

Frankly, such criticism does little to raise or lower our estimation of a politician … and barring a documented, seismic revelation of actual abuse (or a misuse of taxpayer resources) we are inclined to tell Klobuchar’s former staffers to stop whining.

Still, the staff allegations are something to keep an eye on as Klobuchar’s campaign heats up …

Speaking of whining, our guess is liberals will go apoplectic when they read the rave reviews Klobuchar received from several of her Republican colleagues in the Senate.  According to reporters Burgess Everett and Marianne Levine of Politico, GOP senators heaped praise on her candidacy.

“I hope I’m not condemning her nascent run for the presidency,” senator John Cornyn of Texas told Everett and Levine. “She’s too reasonable, too likable, too nice.”

“She wants to achieve a solution and I would hope that’s not a disqualifying thing for someone who would like to be president,” senator Roy Blunt of Missouri added. “I like her a lot and hope that’s not harmful to her.” 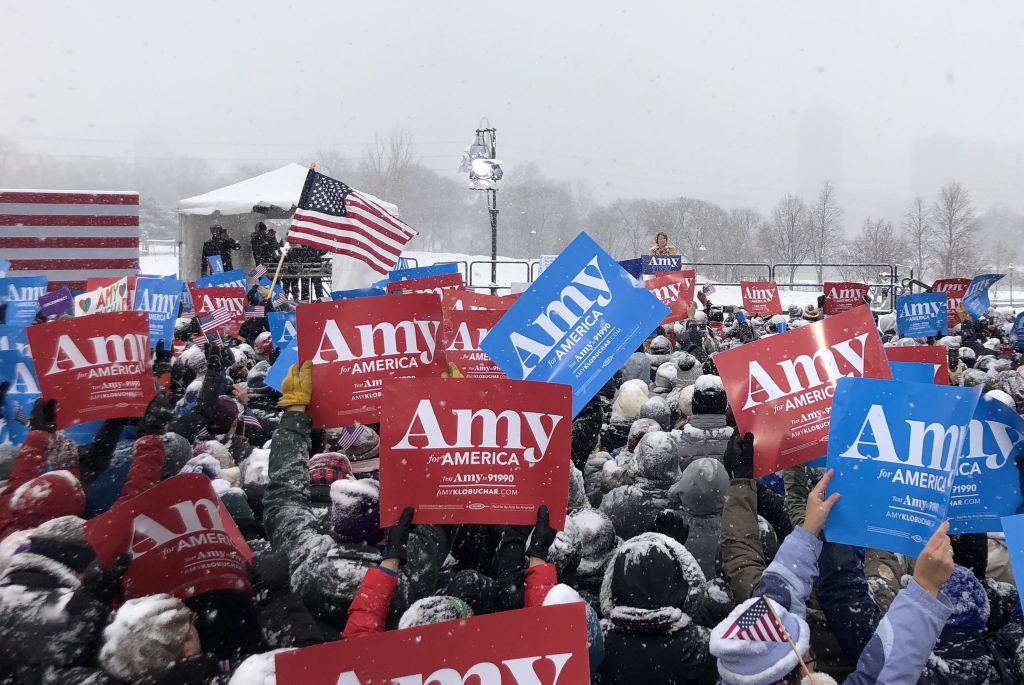 At her rally (above), Klobucher touted herself as a candidate who could bring rival factions together in Washington, D.C.

“We are tired of the shutdowns and the showdowns, of the gridlock and the grandstanding,” Klobuchar said. “Our nation must be governed not by chaos but by opportunity.”

We agree … although we suspect her hard left economic, environmental and immigration policies will do very little to create opportunity in America.  Similarly, we believe her support for failed, warmongering neoconservative foreign policies is equally disqualifying.

Democrats are indeed facing both opportunity and chaos in 2020.   Trump is exceedingly vulnerable in a general election – and could also wind up facing credible opposition in a Republican primary depending on how certain things shake out.

But Democrats are entering what could be a brutally divisive free-for-all … and there is no guarantee the nominee they ultimately choose will be able to exploit Trump’s weaknesses.  Or for that matter appeal to the nation’s growing political center …

Frankly, it is far more likely they choose a candidate who drives the party even further to the left …

Do we view Klobuchar as the sort of candidate who could emerge from the Democratic goat rodeo as a credible centrist nominee?   No … although as the case with all of the Democratic candidates seeking to have their voices heard in the chaotic and unpredictable “First in the South” presidential primary here in South Carolina, our microphone is her microphone whenever she wishes to address our readers.

Got something you’d like to say in response to one of our stories? Please feel free to submit your own guest column or letter to the editor via-email HERE. Got a tip for us? CLICK HERE. Got a technical question or a glitch to report? CLICK HERE. Want to support what we’re doing? SUBSCRIBE HERE.
Banner: @AmyKlobuchar