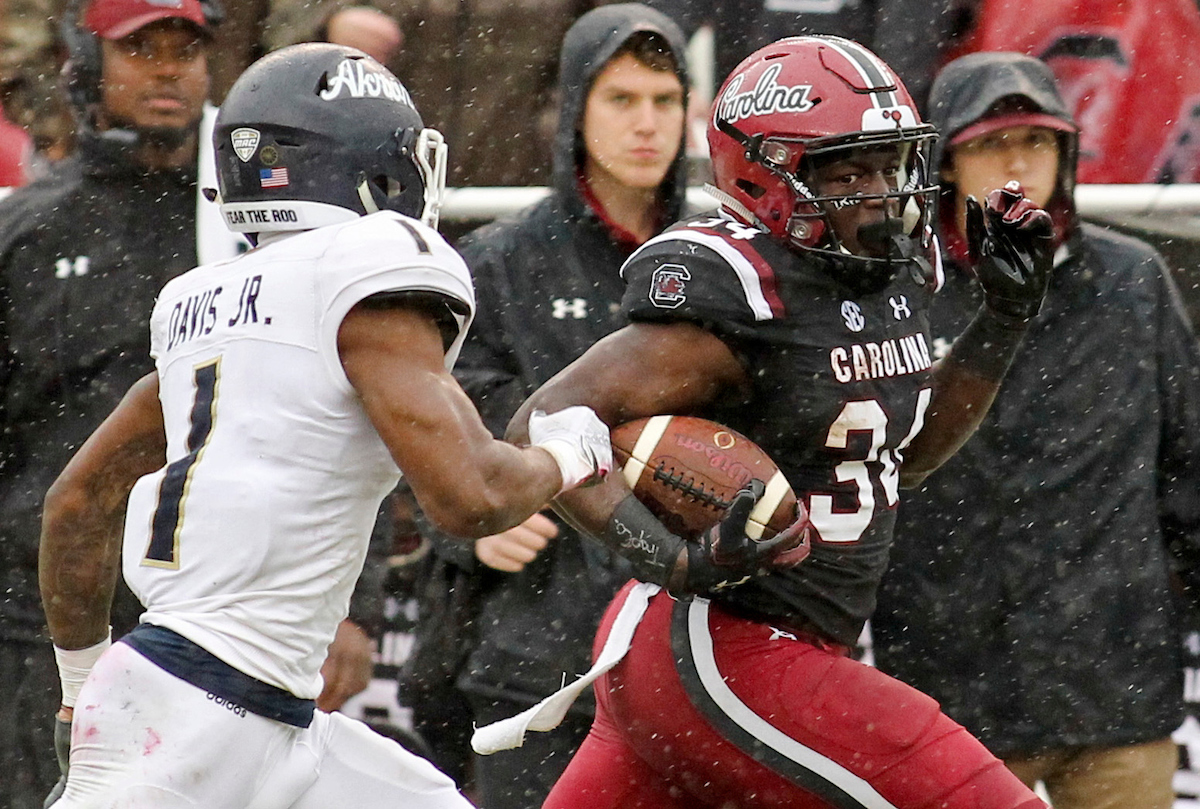 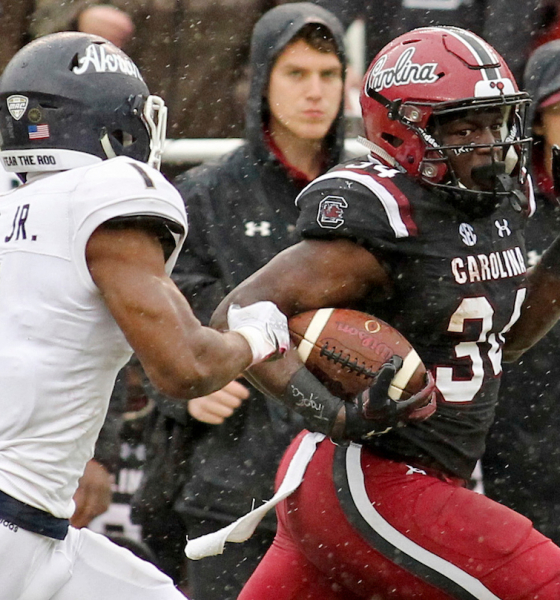 Although “Gamecock Nation” didn’t see it …

The University of South Carolina football team earned no style points on a soggy Saturday afternoon at Williams-Brice stadium in Columbia, S.C.  The Gamecocks’ 28-3 victory over the Zips of Akron was about as ugly a win as the program has seen under third-year head coach Will Muschamp.

The only good news?  Hardly anyone was on hand to witness it …

The game drew an announced crowd of 53,420, although that figure – equivalent to two-thirds of the stadium’s capacity of 80,250 – was clearly wishful thinking on the part of the school’s athletics department.  If there were even half that number of actual “butts in seats,” we would be shocked.

At halftime, one reporter – Andrew Miller of The (Charleston, S.C.) Post and Courier – counted only thirty-nine spectators in the entire east upper deck of the stadium, a section which can accommodate more than 18,000 fans.

Guess there are limits to the longstanding loyalty of the “Gamecock Nation,” although given how deflating this season has been – it’s hard to blame them.

South Carolina (7-5, 4-4 SEC) utterly failed to live up to expectations this season, one of the reasons this late-season matchup against a lower-tier opponent was poorly attended.  Also, this game was a makeup contest (replacing a tilt against Marshall that was cancelled back in September due to Hurricane Florence).  Furthermore, the weather was atrocious.  And finally, it was on television (assuming the SEC Network’s alternative channel qualifies).

“It will be the most forgettable game of this Saturday, just by dint of how insignificant it is relative to the other games surrounding it on the schedule,” the website Deadspin noted.

“This might just be a big program and a small program, both seizing their chances at one last check,” the site added.

Ouch … although judging from the rows of empty seats in all levels of the stadium, it won’t be a big check.

Those who did shell out their hard-earned to watch this game were actually treated to a decent first half of football from the home team – which raced to a 28-3 lead on the strength of three touchdowns from senior wide receiver Deebo Samuel, who played his final game at Williams-Brice.  The speedy wideout from Inman, S.C. had four catches for 33 yards – but two of those grabs were good for scores.  Samuel also recovered a fumble for a touchdown. 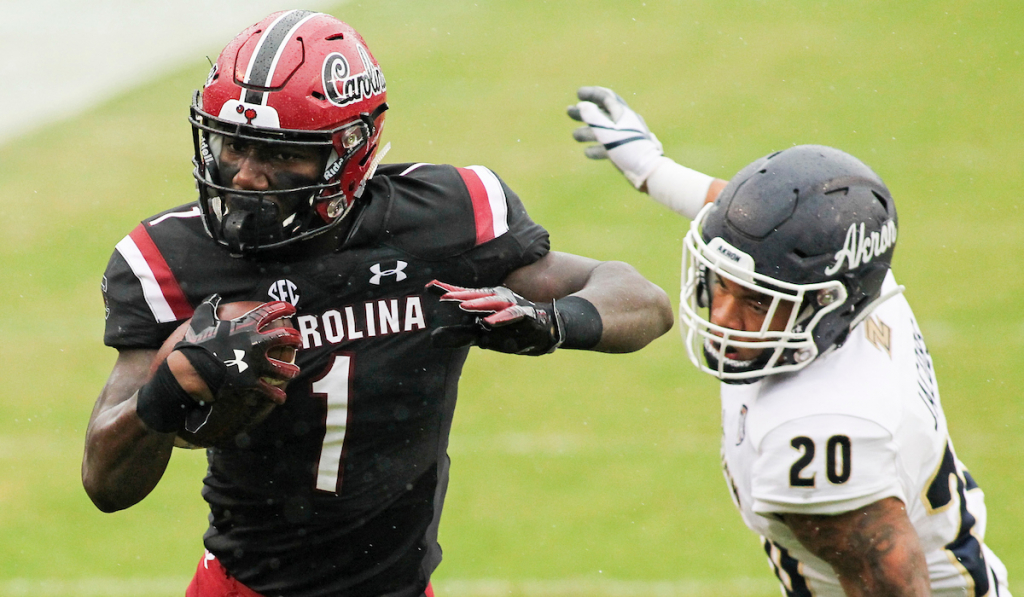 Samuel will be taking his game to the NFL in 2019 (he is projected as a possible second round pick next spring), while Edwards and junior quarterback Jake Bentley will likely test their draft status before deciding whether to return for their senior seasons in Columbia.

“Dang, the NFL?” Edwards said after the game.  “I haven’t even thought about it.”

Our guess is the NFL is thinking about him, though …

The 6-foot-3, 220-pound receiver from Conway, S.C. made some incredible catches this year, including a circus-style reach-around grab in a game against Ole Miss earlier this month – arguably the high point of the South Carolina season.

Bentley has struggled under center this year, but he had a career day in a losing effort against second-ranked Clemson last week.

He didn’t have his best game against Akron (4-8, 2-6 MAC), completing only 14 of 27 passes for 199 yards with three touchdowns and two interceptions.

“Akron’s a team that beat Northwestern,” Bentley said after the game.  “I wish we would have played better. If I don’t turn the ball over in the red zone … probably would have been different.” 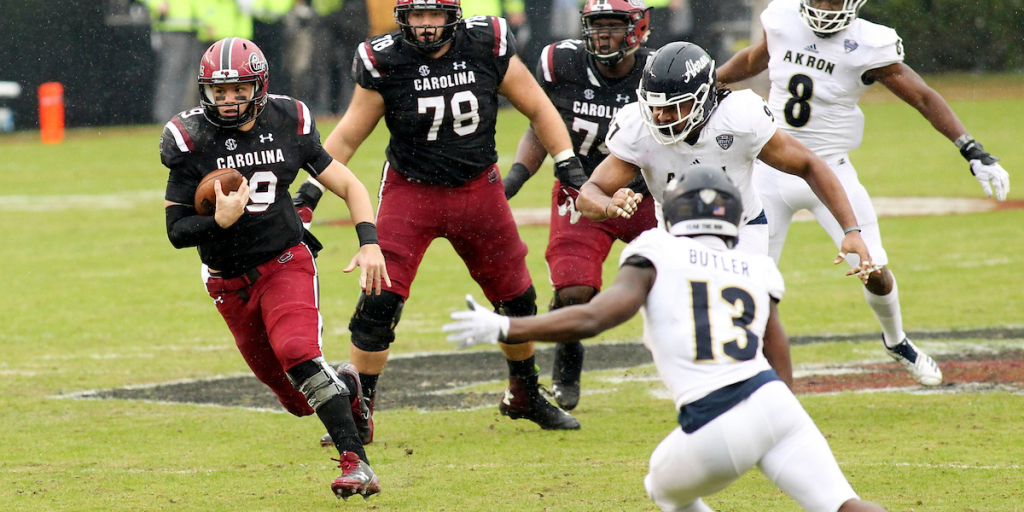 Given the Gamecocks’ inability to get on the scoreboard early in the second half and stretch their lead, Muschamp was compelled to leave his starters in the game throughout much of the second stanza.  This proved costly on the final play of the third quarter when senior offensive tackle Zach Bailey – the team’s top offensive lineman and a bona fide NFL prospect in his own right – had his left leg rolled up on by an Akron defender.

Muschamp announced after the game that Bailey had sustained a broken fibula.

That injury is not “catastrophic,” the coach told reporters – but Bailey will obviously miss the Gamecocks’ bowl game.

That’s terrible news for the 6-foot-6, 314-pound native of Summerville, S.C., who started every game this season at tackle and started 26 games during his first three seasons at the center, guard and tackle positions.