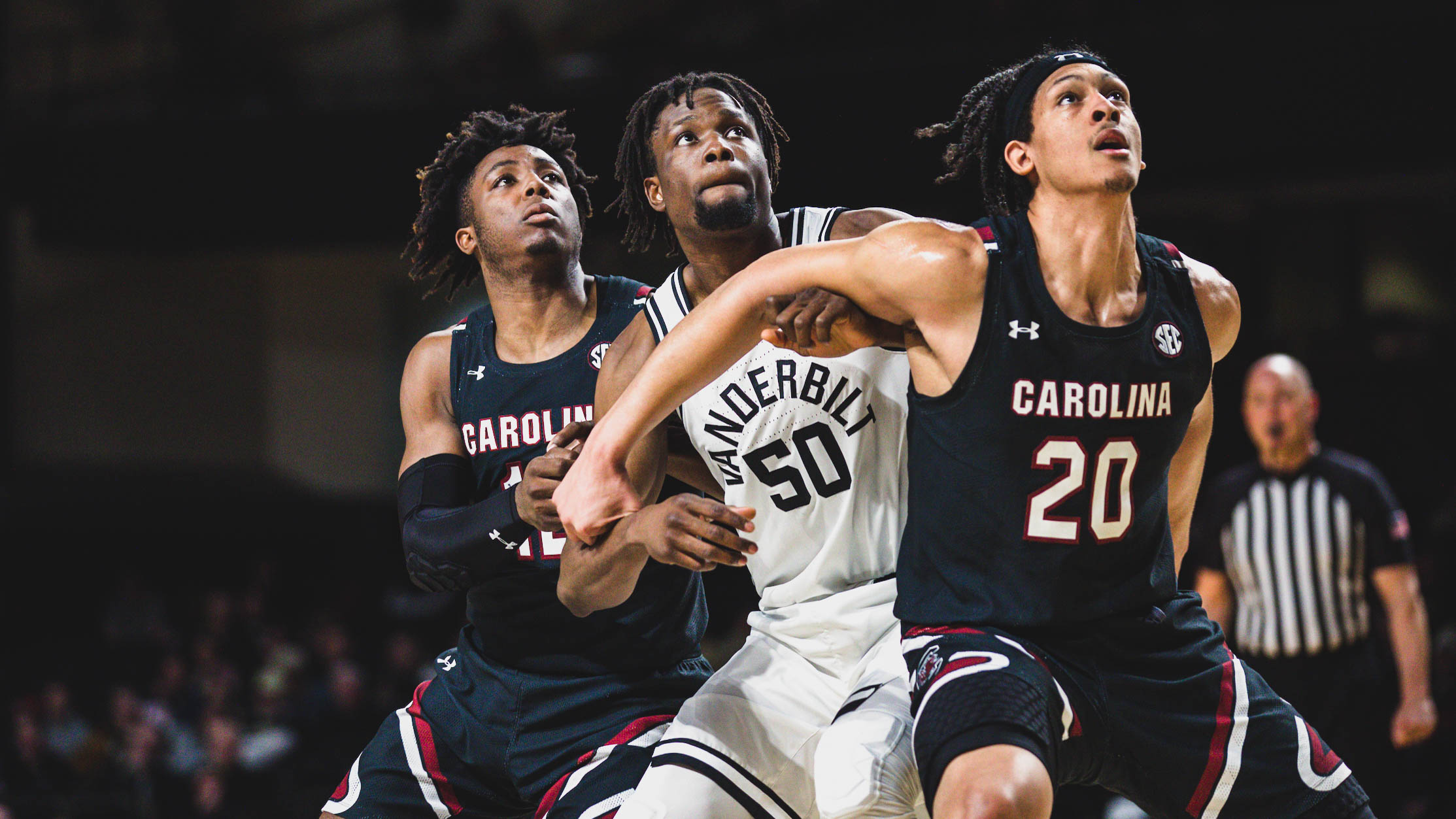 The University of South Carolina men’s basketball program saw its 2020 NCAA Tournament hopes collapse over the weekend with an ugly, unexpected road loss to Vanderbilt – the worst team in the Southeastern Conference (SEC).

The 83-74 Commodores’ win – keyed by 21 points from freshman guard Scotty Pippen Jr. – all but guarantees the Gamecocks will not qualify for the “Big Dance,” unless of course they win the 2020 SEC Tournament on their return visit to Nashville, Tennessee this week.

Or at least make it to the championship game …

Head coach Frank Martin’s Gamecocks (18-13, 10-8 SEC) have drawn the sixth seed in the SEC postseason bracket – meaning they will play the winner of the Vanderbilt-Arkansas game, which is scheduled for a 9:00 p.m. EDT tipoff on Wednesday, March 11, 2020.

South Carolina’s tip time against the winner of that first round contest is scheduled for 9:00 p.m. EDT on Thursday, March 12.

If the Gamecocks win, they would have to take on third-seeded LSU – which defeated them 86-80 on their home court at the Colonial Life Arena two weeks ago. If South Carolina can get past those Tigers, they would likely have to face second-seeded Auburn – which vanquished them by an 80-67 margin in late January.

That’s the bad news … the good news? A run of three victories (including wins over NCAA-bound LSU and Auburn) could put South Carolina back in the NCAA conversation – a discussion the Gamecocks have done everything within their power to get out of in recent weeks.

(And if the Gamecocks were to win the championship, they obviously would receive an automatic bracket bid).

Do they deserve to go dancing, though?

Since entering the bubble discussion last month, Martin’s team closed out its regular season with an anemic 2-4 mark – including Saturday’s embarrassing loss to Vanderbilt. The defeat at the hands of the Commodores was particularly painful given first-year head coach Jerry Stackhouse’s team entered the game with a 10-20 record. And had not won back-to-back games since December.

South Carolina already had embarrassing home losses to Boston University and Stetson on its résumé.

It simply could not afford another “bad loss.”

Martin’s team would likely have locked up its NCAA bid already were it not for severe, season-long struggles in two key aspects of the game: Fouling and free throw shooting. The Gamecocks committed an astonishing 23.3 personal fouls per game this season. That number ranked No. 350 nationally … out of 350 Division I programs.

In other words, no team in America fouled its opponents more than South Carolina.

Meanwhile, the Gamecocks failed to take advantage when they were fouled – shooting an atrocious 62.8 percent from the free throw line during the 2019-2020 regular season. That percentage ranked No. 342 nationally.

Honestly, when one considers those two statistics … it is amazing South Carolina had a shot at the NCAA tournament in the first place.

A lot of criticism has come down on the head of Martin in the aftermath of the Vanderbilt loss – some of which is probably well-deserved. This news outlet has often criticized Martin ourselves (while also frequently taking note of his inability to handle criticism without making excuses).

Having said that, we are not going to come down too hard on him in this case. South Carolina clearly took a small step forward from back-to-back middling campaigns in 2017-2018 and 2018-2019 – and it took that step with an incredibly youthful, inexperienced squad.

Of the sixteen players on Martin’s current roster – twelve of them are either freshmen or sophomores. And while losing starting center Maik Kotsar will obviously hurt, there is a lot of talent returning to this program. If Martin can teach his young players to be a little more disciplined on defense (and obviously focus on their free throw shooting in the offseason), the returning nucleus has the potential to take yet another step forward in 2020-2021.

This news outlet is often perceived as “glass half empty” when it comes to University of South Carolina athletics. That’s not true. We simply endeavor to hold the school’s programs accountable for their performances. And while 2019-2020 appears to be trending toward a third-straight unsatisfying ending for Gamecock men’s basketball fans, there is reason for optimism. Unlike head football coach Will Muschamp’s program, Martin has his program’s trajectory back on the upswing.

As long as that continues, Gamecock fans should continue to give him a chance to get South Carolina back into the dance …

Southeastern Conference Calls Off Everything