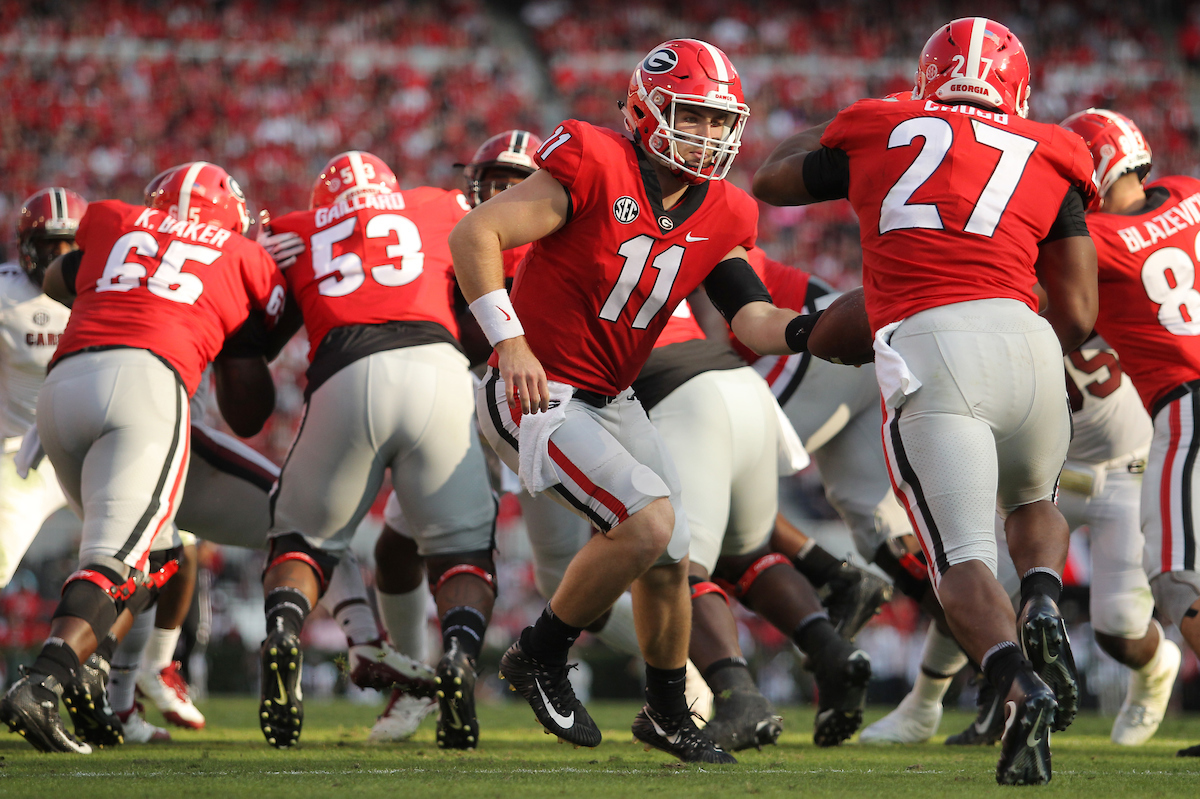 The University of Georgia football team – ranked No. 1 in the nation for the first time in nearly a decade – slugged out an old school Southeastern Conference victory between the hedges on Saturday against South Carolina.

South Carolina entered the game as a 23.5-point underdog – but trailed by only a touchdown at halftime and kept the game much closer than anyone expected.

Ultimately, though, Georgia’s stable of strong, speedy running backs was too much for the Gamecocks to handle – leaving coordinator Travaris Robinson’s unit stuck on the field for nearly two-thirds of the game as the Bulldogs dominated time of possession.

All told, Georgia pounded out 242 yards on the ground – an effort complimented nicely by freshman quarterback Jake Fromm’s 16 of 22 passing performance.  Fromm finished with 196 passing yards and a pair of touchdown strikes.  He also threw the key block on a direct snap touchdown run by Michel that gave Georgia a 7-0 lead late in the first quarter. 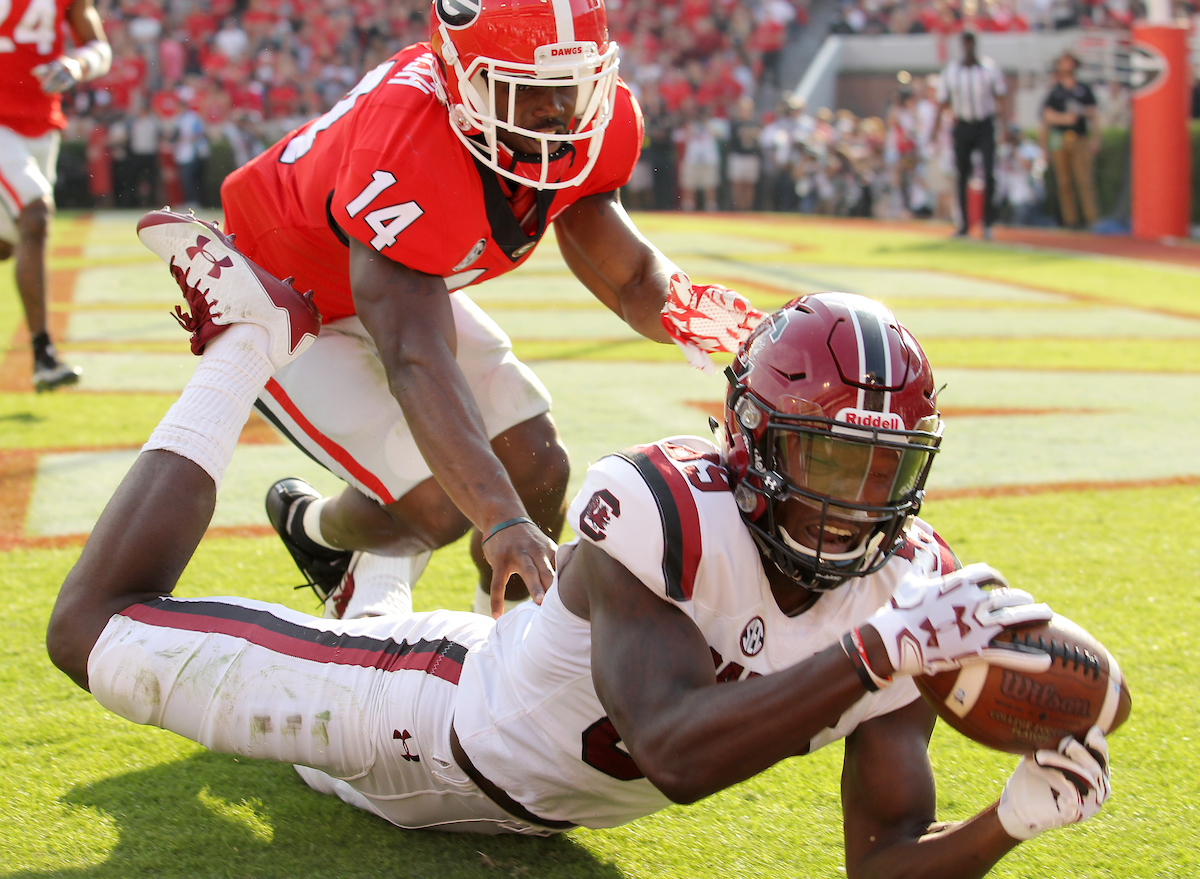 The Gamecocks answered early – with sophomore quarterback Jake Bentley connecting on a 12-yard scoring strike (above) to wide receiver Bryan Edwards that tied the game at 7-7.

On its next possession, Georgia punched back – embarking on a 10-play, 75-yard drive capped by a 10-yard scoring strike from Fromm to senior wideout Javon Wims.

Both Edwards’ touchdown catch for the Gamecocks and Wims’ catch for the Bulldogs were originally ruled incomplete passes – but video replays overturned the calls on the field.

Poor clock management at the end of the first half prevented South Carolina from tying the game before intermission, and Georgia opened the second half with another 10-play, 75-yard touchdown drive to take a 21-7 lead.

After trading a pair of late field goals, Georgia’s defense snuffed out any chance of a Carolina comeback with its second interception of Bentley – who entered the game with just four picks through his first eight games of the year.  Bentley slipped to 10-6 since taking over as the Gamecocks’ starting quarterback midway through the 2016 season. 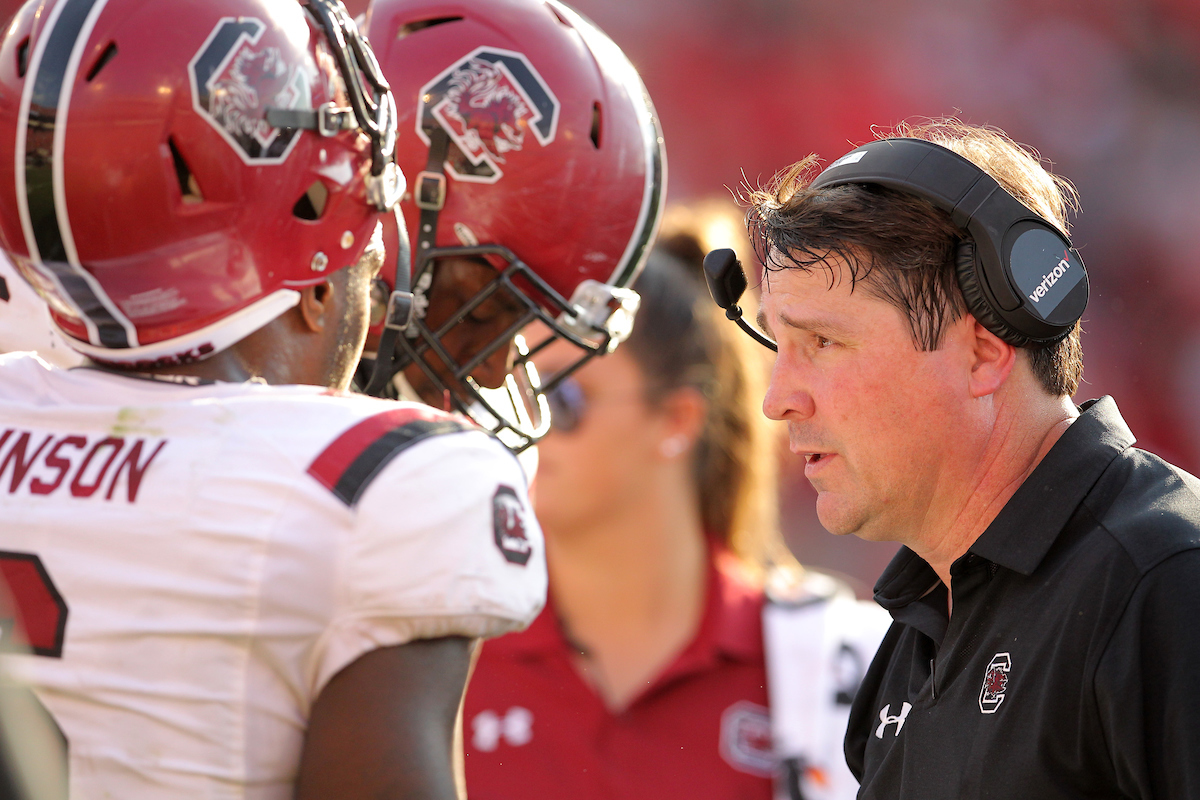 The game was a battle of former Bulldog players, as the 46-year-old Muschamp (above) played safety at Georgia from 1991-1994 – serving as a team captain during his senior season.  Smart, 41, played in Georgia’s defensive backfield from 1995-1998 – earning first team all-SEC honors as a senior.

Courtesy of the University of South Carolina’s athletics communications office, here are the official game stats from Saturday …

South Carolina welcomes SEC East rival Florida to Columbia next Saturday – with kickoff from Williams-Brice Stadium scheduled for 12:00 p.m. EST.  The game will be televised nationally by CBS.

Florida defeated the Gamecocks 20-7 a year ago in Gainesville, but this year’s Gator program is in total disarray.  After starting the season ranked as high as No. 16, the two-time defending SEC East champs have lost four in a row.  The school fired its head coach Jim McElwain after getting blown out two weeks ago by Georgia, but the coaching change doesn’t appear to have made any difference.  The Gators (3-5, 3-4 SEC) were throttled 45-16 by Missouri on Saturday – the team’s first game under interim head coach Randy Shannon.

McElwain posted a 22-12 record in two-and-a-half seasons at Florida after replacing Muschamp – who went 28-21 in his four seasons in Gainesville.