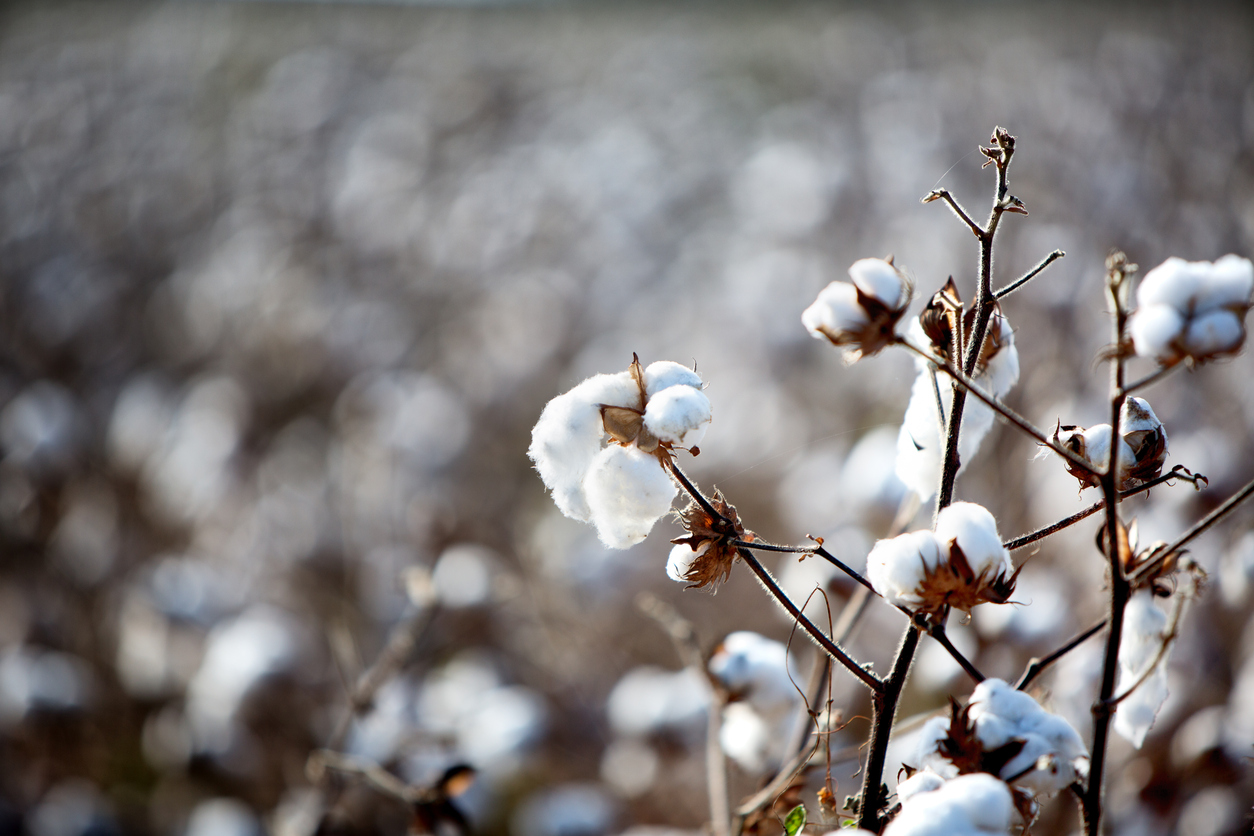 by WILL FOLKS || Somehow, I’m still not exactly sure, but I wound up at the South Carolina “Republican” Party‘s annual fundraising dinner – the Silver Elephant banquet – last night.

Me … the raging libertarian who habitually vents his spleen against the GOP and its status quo perpetuating politicians.  The guy who said the GOP should “die” five years ago … and has yet to walk that line back (nor, frankly, been given any reason to walk it back).

Somehow (not entirely by choice) I wound up darkening the door of the Columbia Metropolitan Convention Center for this gala event – its fiftieth annual iteration.

Did I look good, though? 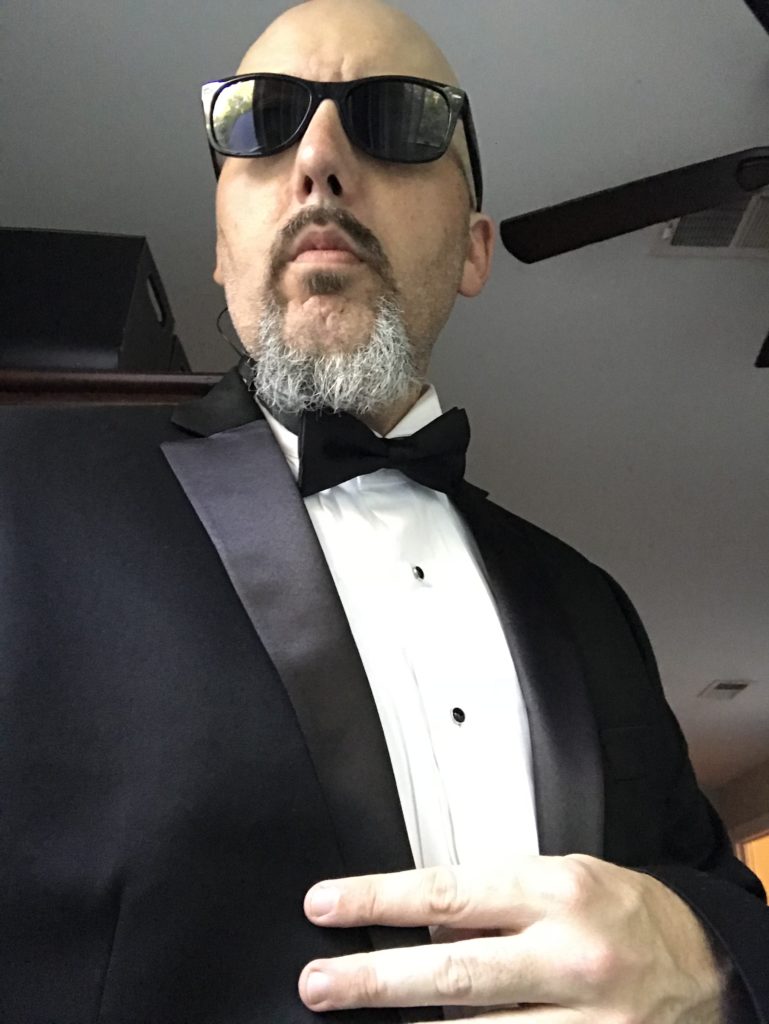 So, what did I learn during my brief foray into Republicanlandia?  For starters, I now know precisely what is meant by the phrase “rubber chicken dinner.”

Let me be clear: I’m all about carnivorousness.  Mankind’s dominion over the animals and what not.  It’s for real.  Meat is not murder, as Morrissey once claimed, it is damned delicious.

In fact I had a steak once in the early 1990s at the Seven Stars Inn in Chester County, Pennsylvania

This meat?  Not so much.

I hate to say it, but the chickens who died for this banquet were thoroughly dishonored.  A stain on their flightless avian legacy. Unless of course GOP donors were actually served bleached, roadside tire debris without their knowledge.  Which, judging by the way my knife was bouncing around the room was a distinct possibility.

Did I eat the meal I was served?  Yes, I was raised on Emily Post.  And I was hungry.  Did I want to?  No.  In fact for the life of me I couldn’t stop thinking about those poor, poor chickens.  Well, that and the fact I really need to check the tire pressure on my car.

Of interest, this GOP “banquet” was served exclusively by black waiters and waitresses … to a crowd that may have had a dozen blacks included among its ranks.

And yes, the tables were adorned with cotton pickings …. 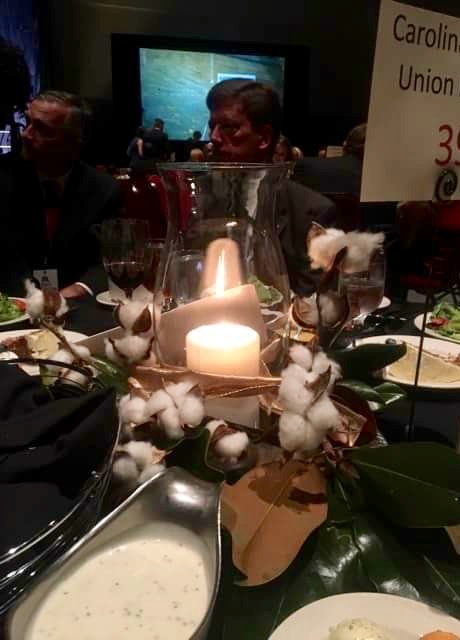 “I’m not sure the centerpieces were such a good idea!” one event attendee texted me afterward.  “Cotton pickings? Really?  Several of the attendees were not happy.”

Maybe so, but I’m sure Henry McMaster – the guffawing South Carolina governor who refuses to relinquish his membership at a “whites only” country club – probably felt right at home.

McMaster spoke at the event – which was actually a subject of some controversy seeing as all three of his announced opponents for the GOP gubernatorial nomination were in attendance (and were not offered the opportunity to address the crowd).

Of course, if I’m Catherine Templeton, Kevin Bryant or Yancey McGill … I want McMaster speaking as often as possible.

“Foghorn Governor” was at his thick-drawled worst at this particular event, introducing keynote speaker U.S. Senator Cory Gardner of Colorado with the line “come on up here an’ talk ta these South Cara-line ‘Publicans.”

Unlike the perpetually goofy McMaster (who was observed on several occasions visiting the liquor cabinet), Gardner gave a good speech.  A great speech, actually.

He tripped up on one line (a fairly easy alliterative transition if you ask us) but other than that not a syllable was out of place.

In fact, Gardner’s address (which prompted the usual presidential talk about the donor crowd) probably would have qualified as a worthy contribution to American political oratory were it not for one fatal flaw … its fundamental inaccuracy.

Gardner recited a litany of “principles” and “values” his party is supposed to stand for, which would be all well and good … assuming they actually stood for any of those things.

The party is addicted to taxing, borrowing and spending on a government that produces such abysmal outcomes – economically, fiscally, educationally and with regards to infrastructure, public safety and other core functions of government.

Accordingly, Gardner’s impassioned rhetoric about the country meeting each new challenge “standing up” – and his war stories channeling the valor of other people (most notably two Pearl Harbor survivors) – didn’t impress me much.

And that’s just not good enough … for America or for South Carolina.