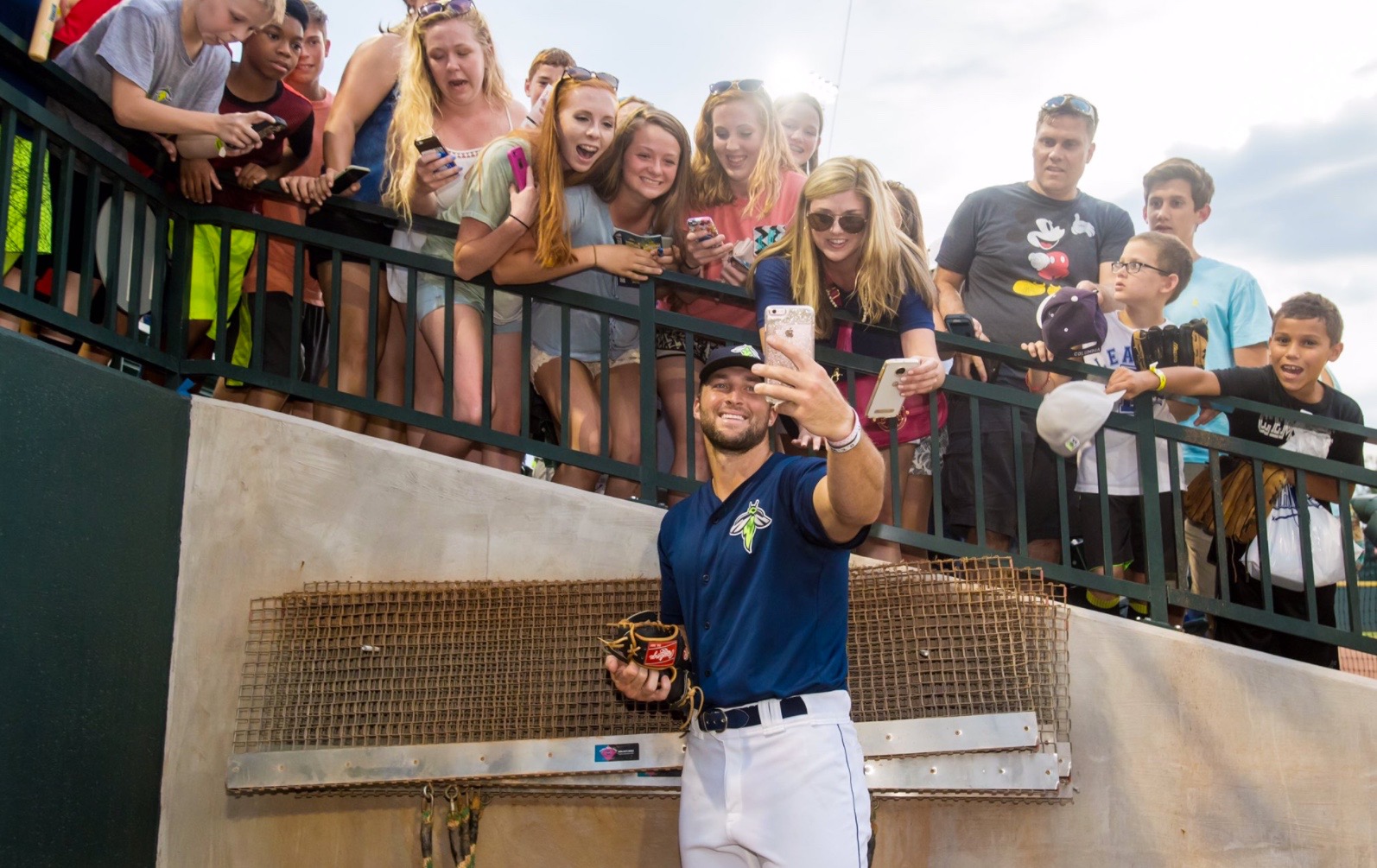 Through 63 games with the Fireflies, Tebow batted .220 with three home runs and 23 runs batted in (RBI).  He notched 47 hits in 214 at bats (including thirteen doubles and a triple) – while striking out 69 times.

Would those numbers ordinarily warrant a promotion?

“It’s not like he’s tearing up the league,” Mets general manager Sandy Alderson told The Orlando Sentinel. “But at the same time all indications are positive in terms of various things we look at – chase rates and exit velocity.”

Our guess is Alderson is looking at a different set of Tebow-related statistics: Butts in seats and money in the bank.

Attendance at the Fireflies’ home ballpark in Columbia, S.C. – the centerpiece of a failed government-subsidized economic development venture – has averaged roughly 5,230 per game with Tebow in the lineup.  That’s approximately 1,500 more fans per game than the team drew at the stadium last year.

On the road Tebow has proven to be an even bigger draw – attracting an estimated 2,200 more fans per game when compared to last year.

Now the Fireflies must find another way to attract fans to the ballpark – which won’t be easy considering the team is operating in a marketplace that has proven fiercely protective of its intercollegiate athletic franchise.

Of interest?  The Mets do not own the Fireflies – but they do own the St. Lucie Mets.  So the parent organization stands to profit directly from Tebow’s promotion.

Tebow’s stint with the Fireflies clearly provided a financial spark to the ball club – although Columbia, S.C. taxpayers are a long way away from recouping the $71 million that city leaders plowed into the Bull Street development on their behalf.

This website has consistently opposed that investment – just as we oppose any taxpayer subsidization of “economic development.”

We’ve said it before, we’ll say it again … (and again): It is not government’s job to “create jobs.”  It is government’s job to protect life, liberty and property – and to do so via a tax and regulatory climate that is transparent, fair and unobtrusive.

Taking taxpayer money and pumping it into speculative real estate investments is wrong – whether those investments succeed or (as is the case at Bull Street) fail.

Florida State Quarterback Dismissed After Punching Woman In The Face