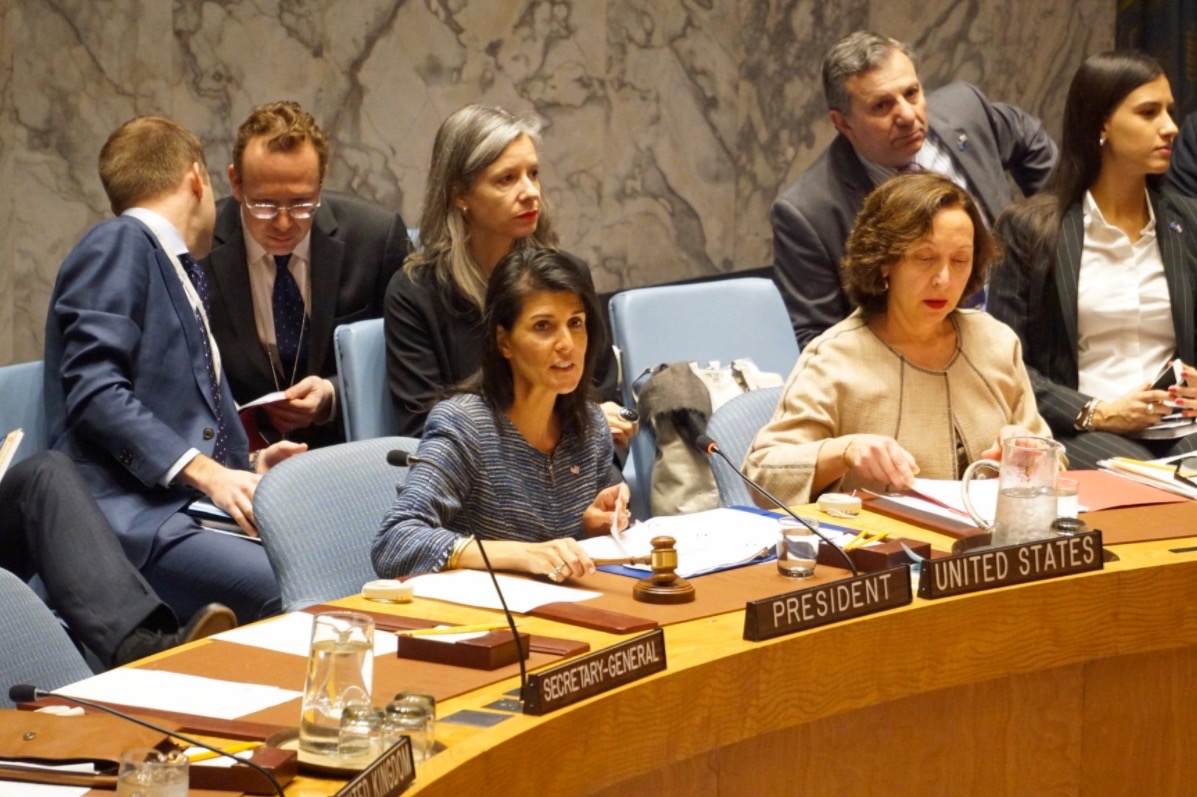 “NEOCON” NIKKI HALEY IS GETTING OUT OF CONTROL …

U.S. ambassador to the United Nations Nikki Haley had two claims to fame prior to her recent diplomatic appointment by president Donald Trump: Running her home state of South Carolina even further into the ground (here, here, here, here and here) and coming out against a controversial flag she previously supported.

Indeed.  Oh, and Haley’s atrocious outcomes in office were produced while this one-time Tea Partier presided over record government growth.

Given her lack of accomplishment, how did Haley receive such a high-profile appointment?

That’s a question worth exploring further …

We’ll probably never know exactly how Haley survived the vetting for this post (ahem, ahem), but it’s pretty obvious why she was appointed: Trump wanted to clear her out of office for S.C. lieutenant governor Henry McMaster – one of his early 2016 supporters who ascended to the Palmetto State’s governorship (an office he’d long coveted) in the aftermath of Haley’s appointment.

It was a sop, in other words … for someone else.

No doubt sweeting the pot for Trump?  The fact Haley is a female minority.  The first “blah blah blah” to “such and such.”  You know the drill.  Media cover.

But is Haley’s performance in her new role creating problems for Trump?  Specifically, is her mouth writing checks America’s president (to say nothing of its military and its taxpayers) cannot cash?

Make no mistake, the new ambassador has been the subject of all sorts of flattering press in recent months – which makes sense seeing as Haley has reflexively (albeit inaccurately) attacked Russia ad nauseam.  Oh, and continued the time-honored tradition of sucking up to Israel (no matter how much it costs).

Basically Haley has been regurgitating the same neoconservative talking points she spouted back in 2016 as a mouthpiece for Marco Rubio’s failed presidential bid.  You know, the failed #NeverTrump bandwagon (which Haley enthusiastically joined when she delivered the 2016 GOP response to former president Barack Obama‘s State of the Union address).

Advising Haley then – and now – is Jewish neoconservative pollster and political consultant Jon Lerner (below, far left), who certainly appears to be whoring Haley out politically on the national stage every bit as aggressively as he whored out another former S.C. governor – Mark Sanford. 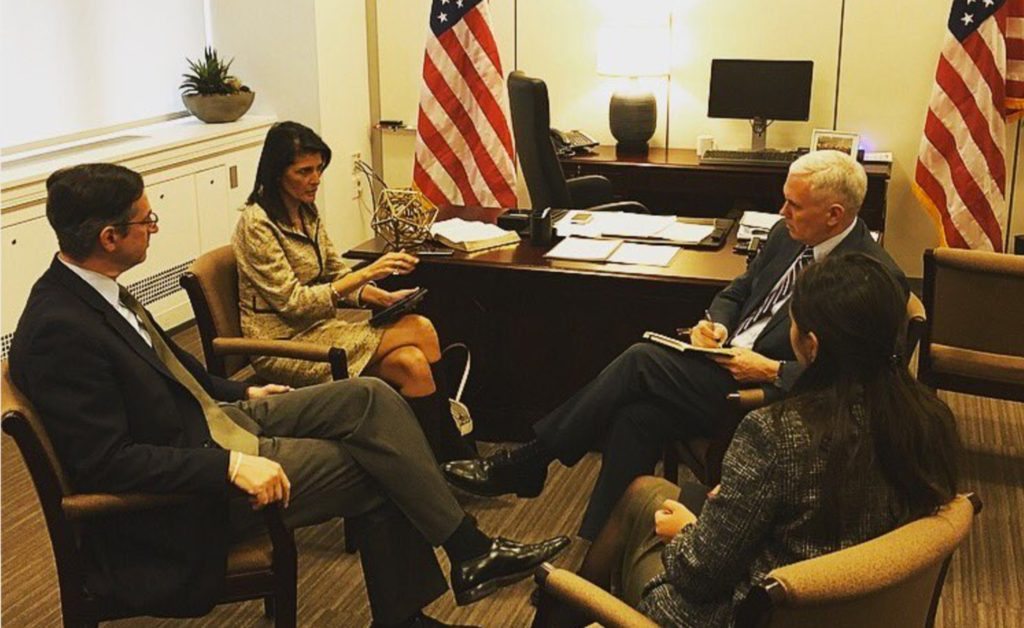 Anyway, now that we’ve identified how Haley got her job and what she’s been doing since she got it – what is her work actually accomplishing?  And is it consistent with the policy goals of the administration she works for?

Haley’s demonstrably false rhetoric on Russia has already been called out for what it is – pure fiction.  Meanwhile, Haley herself has acknowledged she’s totally freelancing when it comes to her pronouncements on the most important foreign policy relationship in the world right now.

“I’m not going to talk about where the president is, because I don’t know,” Haley told NBC last month.

Nonetheless, Haley continues to get further and further ahead of her boss when it comes to setting (or claiming to set) American policy on the international stage – including advocating for the ouster of Syrian president Bashar al-Assad, one of Russia’s top allies in the Middle East.

“Regime change is something that we think is going to happen because all of the parties are going to see that Assad is not the leader that needs to be taking place for Syria,” Haley added.  “So what I think you’re seeing is, this isn’t about policy or not, this is about thoughts.  And so when you look at the thoughts, there is no political solution that any of us can see with Assad at the lead.”

Um … regime change is about thoughts not policy?  What in the hell is she even talking about?

“Still, she’s the one drawing lines in the sand that Trump either has to defend or look really bad (not defending),” our intrepid D.C. operative noted.

“She never supported Trump and doesn’t to this day,” one veteran Washington, D.C. strategist told us.  “She has no idea in hell about any of this but is depending on advice from Lerner – a radical neocon.”

Two of Trump’s other top administration personnel – secretary of state Rex Tillerson and national security advisory H.R. McMaster – have already walked back some of Lerner (err …Haley)’s more aggressive rhetoric this week.  McMaster said he supports Assad’s ouster, but added that “we’re not going to be the ones who effect that change.

Meanwhile Tillerson – whose job Haley claims she was offered (but passed on) – pointed out the perils of regime change.

“We’ve seen what that looks like when you undertake a violent regime change in Libya, and the situation in Libya continues to be very chaotic, and I would argue that the life of the Libyan people is not all that well off today,” Tillerson told ABC this week. “So I think we have to learn the lessons of the past and learn the lessons of what went wrong in Libya when you choose that pathway of regime change.  Any time you go in and have a violent change at the top, it is very difficult to create the conditions for stability longer term.”

The question remains, though: Who is speaking for the United States?

Obviously, Trump ran for president in 2016 as a non-interventionist … but now we’re not so sure what he believes.  We certainly hope he can see that a nation $20 trillion in debt has no business engaging in yet another costly military misadventure in the Middle East.

One thing is clear, though.  Haley is taking full advantage of Trump’s indecision – using it to advance her own political interests without so much as a thought for the best interests of American soldiers, taxpayers and citizens.

Frankly, it’s past time someone put a leash on this puppy …

Something’s Going Down On Interstate 26