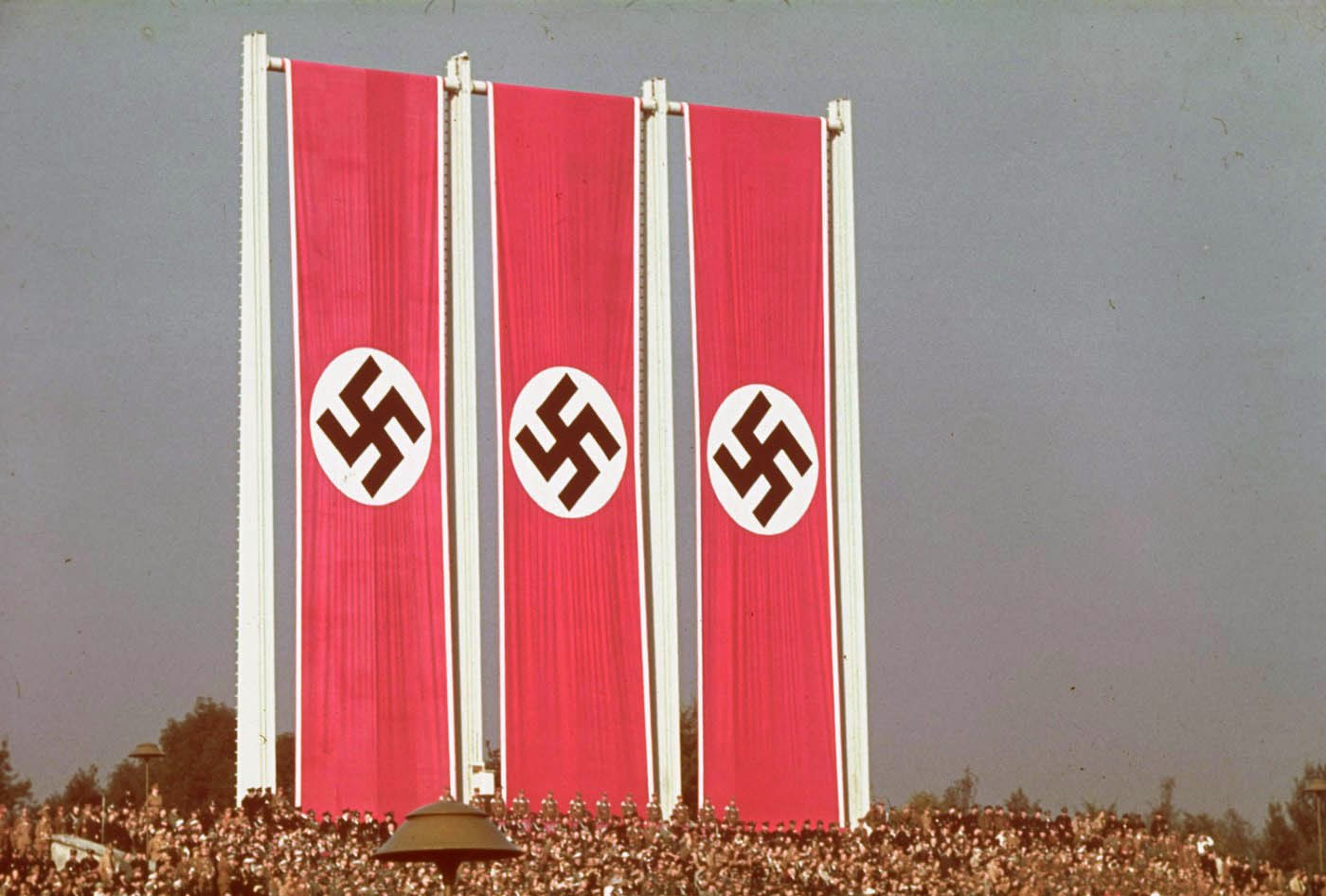 A congressional staffer for fiscally liberal U.S. Rep. Joe Wilson of South Carolina referred to president Donald Trump‘s supporters as Nazis, implied that Trump used cocaine during a presidential debate and blasted those Americans who didn’t support Democrat Hillary Clinton as voting against their own self-interests.

These are just a handful of the over-the-top social media pronouncements attributed to Josh Grant, who works in Wilson’s Midlands, South Carolina field office.

And yes, Wilson is a Republican … well, sort of.

Several of Grant’s social media pages appear to have been taken offline in the aftermath of this website seeking comment from Wilson’s Washington, D.C. press office regarding his musings.

Here are a few of the screen caps we were provided, though … 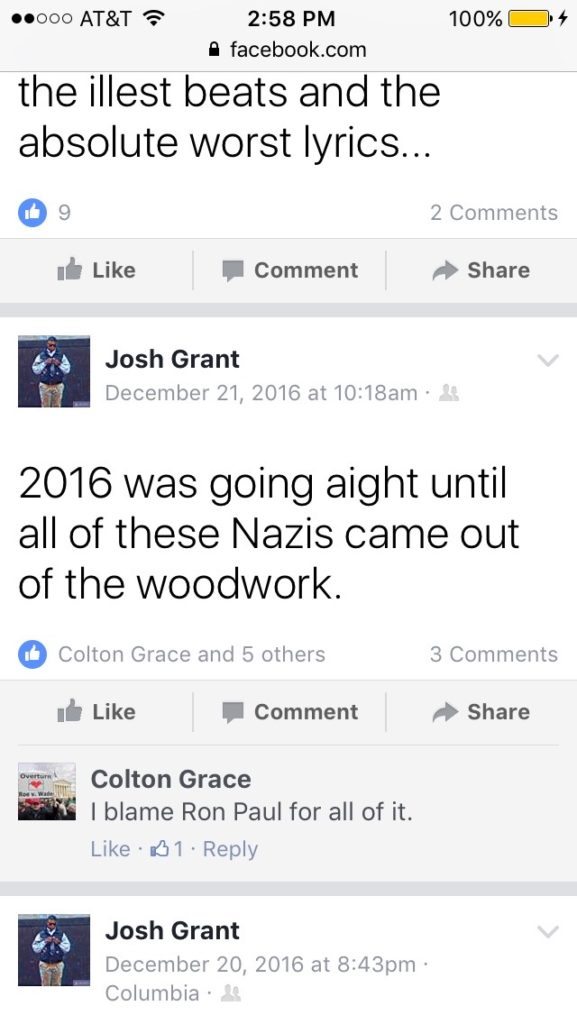 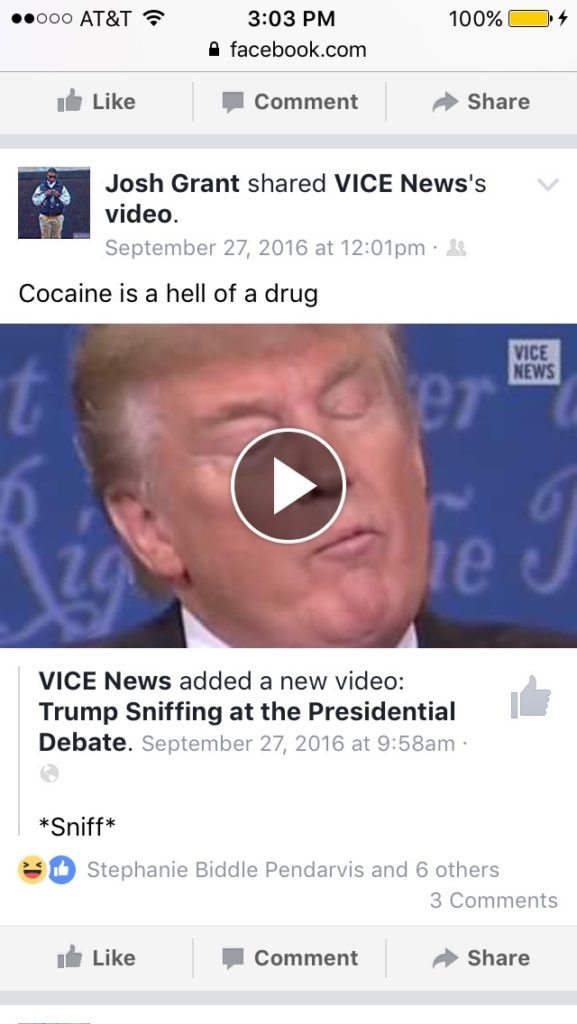 To be clear, Grant is exercising his constitutionally-protected right to free speech here – and we support him in doing so.  Unequivocally.

Moreover the views he is expressing on his social media pagers are clearly not a reflection of Wilson’s views (at least we don’t think they are).

In fact we were prepared to take a pass on this whole story – or at the very least argue that Grant shouldn’t lose his job over the dust-up.

Then we read this exchange … 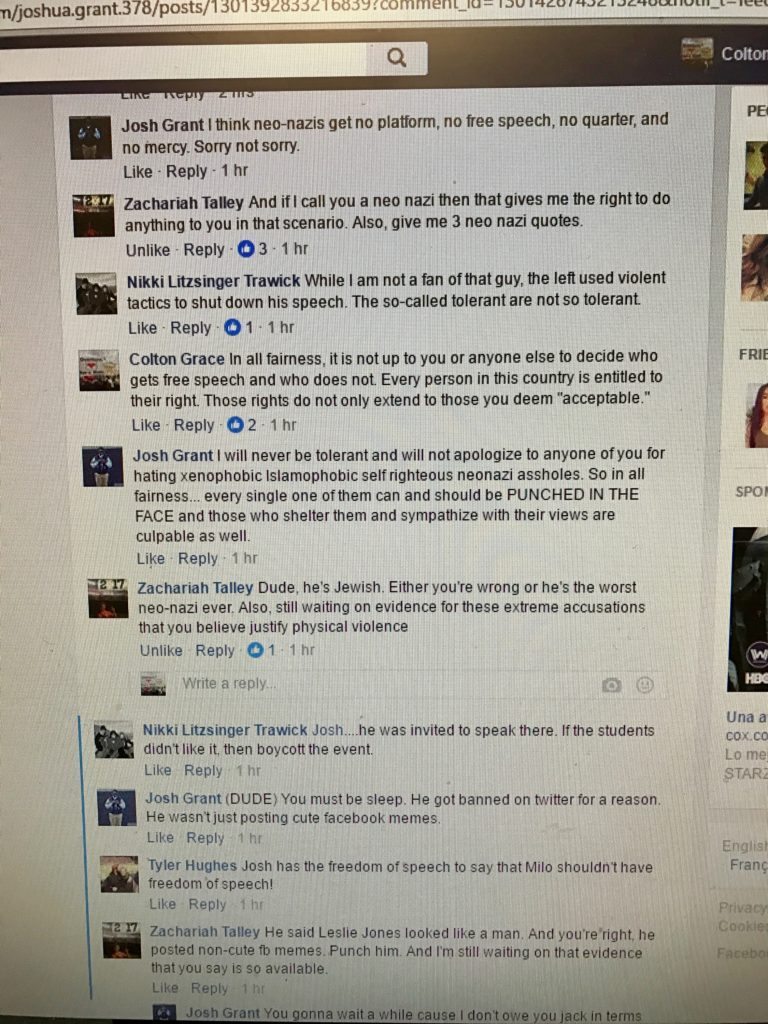 That’s Grant mixing it up with fellow Facebook users in response to the violent protests that broke out earlier this week at the University of California-Berkeley (the home of free speech, ironically).  These protests – led by street thugs armed with crowbars and Molotov cocktails – were a response to a scheduled appearance by another social media provocateur, openly-gay conservative commentator Milo Yiannopoulus.

Grant doesn’t think Yiannopoulus should have the same right to free speech he does, apparently.

“I think neo-nazis get no platform, no free speech, no quarter and no mercy,” Grant wrote, adding “Sorry, not sorry.”

Called out for his hypocrisy, Grant had this to say …

I will never be tolerant and will not apologize to anyone of you for hating xenophobic Islamophobic self righteous neonazi (sic) assholes. So in all fairness … every single one of them can and should be PUNCHED IN THE FACE and those who shelter them with their views are culpable as well.

Wow … such calls to physical violence obviously qualify as free speech, but they fall well out of bounds for a congressional staffer.

Wilson’s office would seem to agree.

“I would like to make it clear that the beliefs and opinions represented in these screengrabs are those of Mr. Grant, not the Congressman,” Wilson communications director Leacy Burke told us.  “Additionally, while we respect his right to free speech, the office has counseled Mr. Grant about using better judgement in his online posts going forward.”

But Grant’s hypocritical and hateful comments are unbecoming of a public servant – not to mention emblematic of the far left’s ongoing descent into toxic, increasingly violent madness.