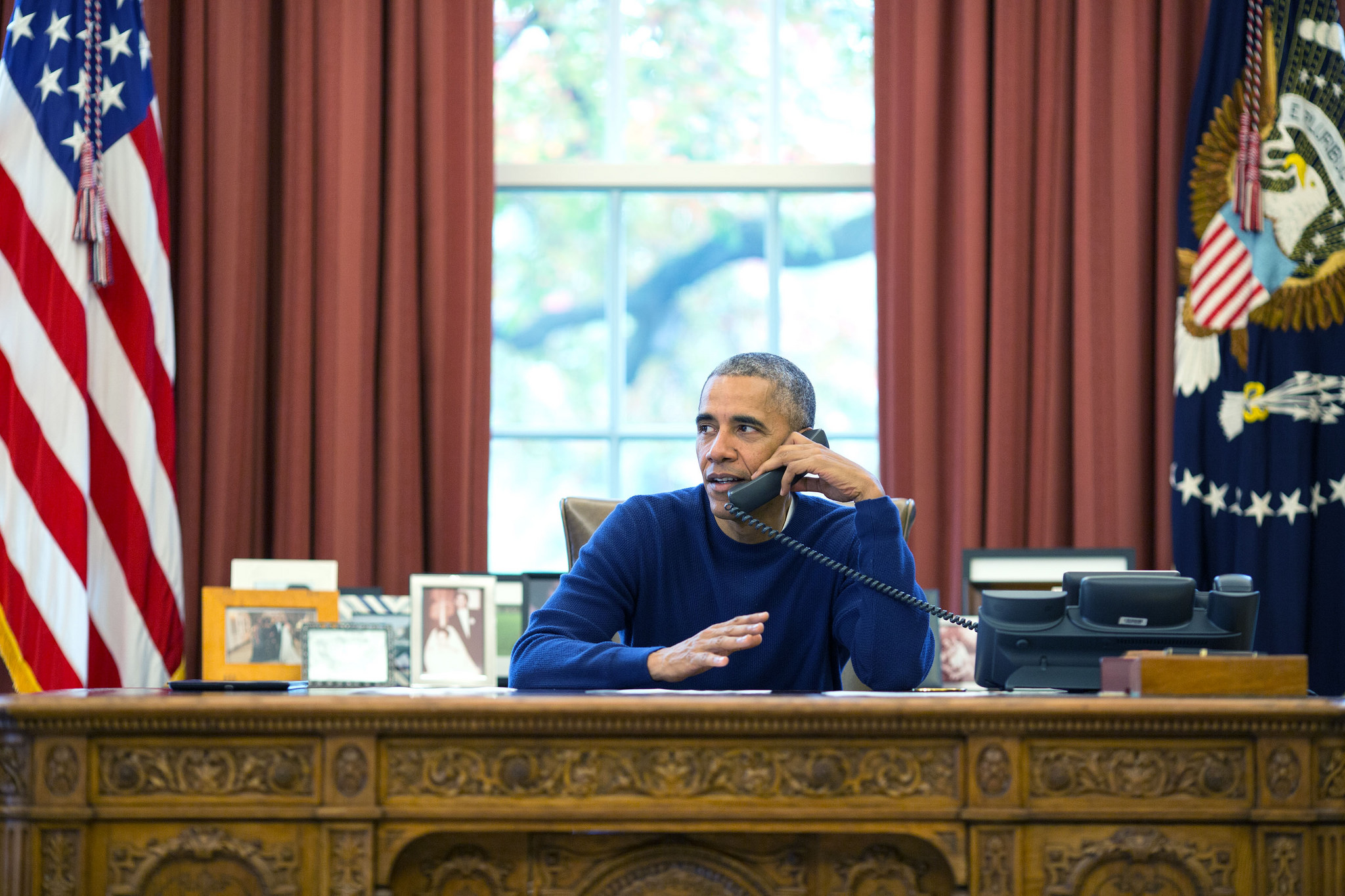 OUTGOING PRESIDENT LEAVES AMERICA ON THE VERGE OF WAR …

After President-elect Donald Trump’s historic victory in the election was announced in the early morning of Nov. 9, 2016, Russian president Vladimir Putin offered Trump his congratulations and his hope that the crisis in U.S.-Russian relations over Syria and Ukraine could begin to come to an end.

“[Trump] spoke about resuming and restoring relations with Russia. We understand the way to that will be difficult, taking into account the current state of degradation of relations between the U.S. and Russia,” Putin said on Russian television, adding, “Russia is ready and wants to restore the fully-fledged relations with the U.S. I repeat we understand this will be difficult, but we are ready to play our part in it.”

Which, perhaps Russia truly is ready to engage in dialogue with the incoming Trump administration – if we all live that long, that is.

In the closing days of President Barack Obama’s administration, the White House has engaged in several provocative moves including expelling 35 Russian diplomats, slapping fresh sanctions on Moscow, doubling down on allegations still without evidence that Russia somehow hacked the election and insinuating that it released Democratic emails to Wikileaks to help Trump and now, U.S. troops are reported to be massing on Russia’s border in NATO ally Lithuania as Russia deploys nuclear-ready missiles in Kalingrad.

The moves come atop already high tensions over the concluding war in Syria, where Syrian and Russian forces have defeated the rebels at Aleppo, and the ongoing, unresolved conflict in Ukraine.  The U.S. attempted the overthrow of Russian ally Bashar al-Assad in Syria in 2013 and backed the overthrow of Russian-backed Viktor Yanukovych in Ukraine in 2014 – where Assistant Secretary of State Victoria Nuland was apparently caught on tape helping to organize the coup – which immediately preceded Russia’s backing the secession of Crimea from Ukraine. These failed U.S. interventions destabilized both regions, risking a wider war between the U.S. and Russia.

Now with just 15 days left in his term of office, Obama seems determined to escalate tensions even further while diplomatic relations with Moscow have deteriorated. In December, Russian spokesperson Dmitri Peskov said, “Almost every level of dialogue with the United States is frozen. We don’t communicate with one another, or (if we do), we do so minimally.”

What a departure from the Obama of 2008, who in the presidential debates with Sen. John McCain (R-Ariz.) declared that “The notion that somehow not talking to countries is punishment to them … is ridiculous.” Now, on his way out the door, Obama has seemingly terminated diplomatic relations with Russia, all but restarting the Cold War.

It has all the appearances of an attempt to box in the incoming Trump administration. Now, when Trump reaches out to deescalate tensions with Moscow – as he campaigned on – it will be portrayed as payback by Trump to Putin for the unproven hacking.  Democratic leaders ranging from Hillary Clinton to Harry Reid to Madeleine Albright on the campaign trail all but accused Trump of acting on behalf of a foreign agent as a Manchurian candidate.

There’s a word for all this: Paranoia.

Except, the Obama administration on the eve of Trump’s inauguration is manufacturing intelligence assessments alleging Russia was intervening in the elections to defeat Hillary Clinton – to make it seem real.

Yet one cannot help but wonder what if the hacking charges are actually wrong? Wouldn’t that mean Obama has brought the nation to the brink of war to sustain a political talking point from the failed Hillary Clinton campaign? All of the initial claims of Russian hacking originated, not from intelligence officials, but from the Democratic National Committee in June 2016 and the Hillary Clinton campaign in Sept. 2015 when it had to do with her private email server and by Oct. 2016 when it came to the Podesta emails it was simply assumed to be the case. It was afterward that Obama then stepped in with the intelligence assessments, seemingly designed to bolster those claims and raise the fear factor.

In the meantime, the evidence, which is flimsy, has not been presented to the American people in any meaningful way. What was presented on Dec. 29 by the intelligence community simply mirrored the same allegations that were already in the public sphere by hired firms and private technical experts but has not been conclusive.Those allegations were of the hacker group, Guccifer 2.0 from June 2016, but not Wikileaks, whose disclosures did not come until a month later. Guccifer 2.0 did bizarrely claim it was giving stuff to Wikileaks, but that was denied by Wikileaks. In an interview on Sean Hannity’s radio program on Dec. 15, Hannity specifically asked Julian Assange about Guccifer 2.0 and DCleaks.com, and Assange said, “who’s behind these [sites], we don’t know.” Hannity explicitly asked if Assange knew them, and Assange said, “No,” indicating they were in fact not the source for Wikileaks’ DNC and Podesta releases. The link between the two has never been proven but it is the link everyone is relying on.

Critically, nothing new was presented.  What purpose did Obama ordering the Dec. 29 disclosure serve, that is, other than to box in Trump with the insinuation that he’s a Russian plant and to damage his stated policy? No real case has been made and it’s been about six months since the initial allegations.

The road to war we appear on, though, is very real.  The evidence is all around us.  And it’s incredibly dangerous. Together, the U.S. and Russia sit on almost 94 percent of the world’s stockpile of nuclear weapons – about 7,000 apiece – enough to kill us all many times over.

In 1994, analysts Len Scott and Steve Smith writing for International Affairs took a fresh look at the 1962 Cuban Missile Crisis, attacking the conventional view that U.S. brinksmanship had forced the Soviets to remove nuclear missiles from Cuba, instead finding that “recent sources seem to show absolutely clearly that U.S. decision-makers were extremely worried about the prospect of any Soviet nuclear response, so much so that the result was to nullify the enormous nuclear superiority that the United States enjoyed at the time,” citing McGeorge Bundy, Special Assistant for National Security Affairs at the time, who argued that nuclear superiority was not important in resolving the crisis, mutual vulnerability was.

In the decades that followed, relations with Russia eventually warmed, leading to détente and the Strategic Arms Limitations Treaties.  Yes, there was an escalation in the early 1980s, but it was followed by the Strategic Arms Reduction Treaty, the collapse of the Soviet Union and the end of the Cold War.

Those diplomatic achievements were accomplishments that occurred at the height of the Cold War, despite the differences between the two countries and the ever-present threat of mutually assured destruction.  They did not come about because of shared values by the U.S. and Russia, but from common interests in reducing the threat of annihilation.

The reason for the U.S. and Russia to talk and keep that dialogue going now is not because of affinity with Russian leaders, but because that threat remains present. Mutual survival. Both countries are just as vulnerable today to an attack by the other, but now we lack diplomacy and there is more than one potential hotspot to contend with that could escalate. The two nuclear superpowers of the world not communicating in itself is dangerous, not desirable.

Yet who is worried about war today?  Apparently not Obama.  He’s too busy fomenting a diplomatic crisis and playing brinksmanship with Moscow when he has a little more than two weeks left in office – all in an apparent attempt to delegitimize the incoming Trump administration.

Where are the cooler heads in Congress and in Washington, D.C.? Policymakers who should know better and ought to be on red alert right now are tepidly silent amid this obvious escalation on Obama’s part.

Even Republican leaders like House Speaker Paul Ryan, who one might think would be cautious in blindly accepting the premise being put forth by the Obama administration that incoming President Trump might be a Russian puppet, appears anxious to seem tough on Russia amid the hacking claims. Appearing on the Hugh Hewitt radio program, Ryan charged – without evidence – that Assange, who has denied Russian involvement in the release of the Democratic emails, is a Russian asset, saying, “I think the guy is a sycophant for Russia.” Guess Ryan thinks Russia stole the election for Trump, too.

Way to cool tensions, there.

And forget about the Democrats.  They’ve lost their minds.  Or worse, they’re treating it like it’s just a game.  There is a certain arrogance, self-assuredness to do with this Russian question from U.S. leaders that ought to be alarming.  Where is the counterpoint from Congress?  The mainstream media?  The foreign policy establishment?

The stakes could not be higher.

January 20 cannot get here fast enough, when we suppose it will be up to President Trump to resolve this crisis, not as payback, but for all of our safety. In the meantime, hopefully Obama will find the sedatives in the medicine cabinet.