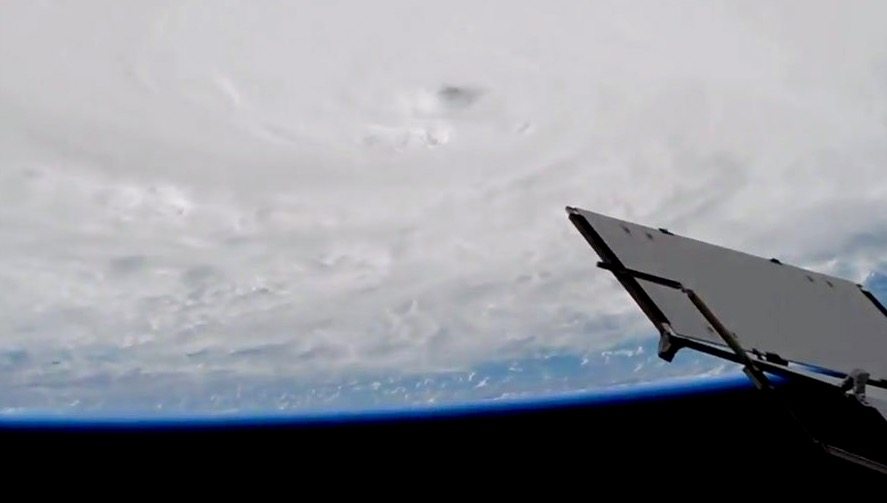 The eye of powerful Hurricane Matthew came ashore near Les Anglais in Western Haiti at around 7:00 a.m. EDT on Monday morning – pummeling the poverty-stricken nation with torrential rain, devastating wind and destructive surf.

Packing maximum sustained winds of 145 miles per hour, the category four monster was located about ten miles east of Tiburon, Haiti according to the 8:00 a.m. EDT Tuesday advisory from the National Hurricane Center in Miami, Florida.

The storm is expected to produce up to forty inches of rain in parts of Haiti and the southwest Dominican Republic, which could trigger “life threatening flash floods and mudslides,” according to the advisory. 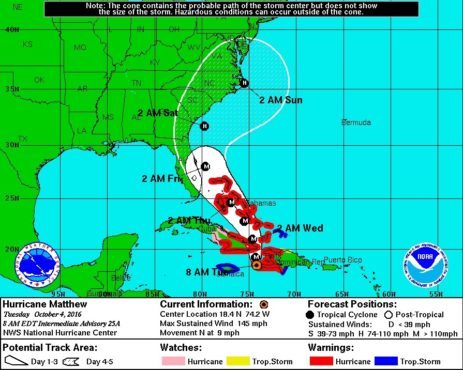 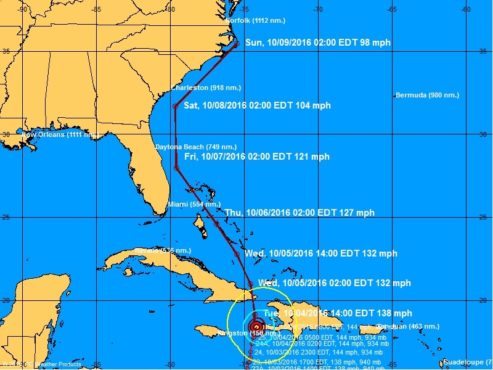 “A turn toward the north-northwest is expected by Wednesday, followed by a northwest turn Wednesday night,” forecasters predicted.  “On the forecast track, the eye of Matthew will move near eastern Cuba later (Tuesday), and move near or over portions of the southeastern and central Bahamas (Tuesday night) and Wednesday, and approach the northwestern Bahamas Wednesday night.”

As Matthew continues its northern march, forecasters are becoming increasingly confident in its future path – and the outlook is not good for the east coast of the United States. Based on current models, the system is projected to pound Cuba and the Bahamas before skirting the coastlines of Florida, Georgia and South Carolina – possibly making landfall on North Carolina’s Outer Banks.

Depending on prevailing atmospheric conditions, though, Matthew could wind up hitting Florida, Georgia or South Carolina (or all three states) as a major hurricane – possibly as early as Friday of this week.

Governors Rick Scott of Florida and Pat McCrory of North Carolina have already declared states of emergency in anticipation of the storm’s arrival.

“If it hits our state, we could see impacts that we have not seen in many years,” Scott said.