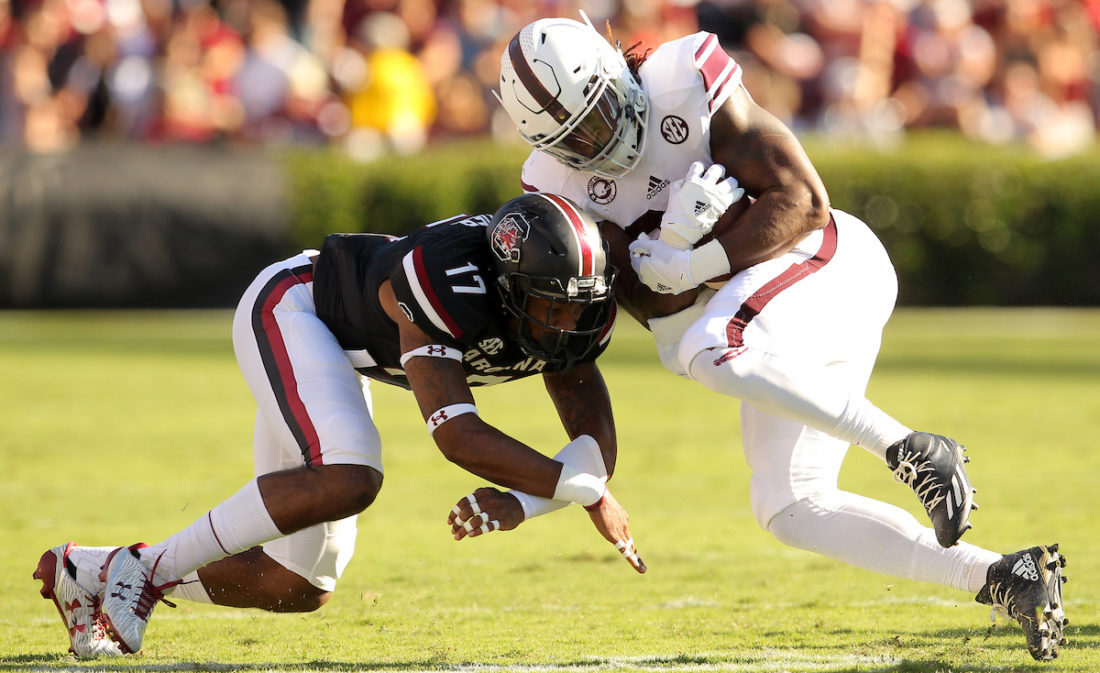 It wasn’t the blowout victory we expected, but ninth-ranked Texas A&M emerged from Williams-Brice Stadium in Columbia, S.C. with a win anyway.

The former Oklahoma Sooner completed 23 of 40 passes for 206 yards with no touchdowns and one interception.  He also ran the ball for 84 yards and one score.  Altogether, the former eye candy of pop star Katy Perry accounted for 290 of his team’s 422 total yards – with true freshman running back Trayveon Williams adding 98 yards rushing as part of the Aggies’ balanced attack.

When true freshman starting quarterback Brandon McIwain was mercifully benched in the fourth quarter, he had completed just nine of fifteen passes for 34 yards – with one costly interception.   Believe it or not, his passing yardage actually ranked behind that of Gamecock punter Sean Kelly, who connected on a 36-yard completion to tight end Hayden Hurst on a fake punt midway through the third quarter.

That drive ended in a missed field goal – one of two errant kicks on the afternoon from the usually reliable Elliot Fry.

The other component of McIlwain’s dual-threat capability wasn’t exactly firing on all cylinders either, as the 6-foot-0, 205-pound Newtown, Pennsylvania native picked up just 12 yards rushing on seven attempts.

Former walk-on Perry Orth – inserted for McIlwain during the fourth quarter – completed 11 of 18 passes for 138 yards during his three series at the helm of the Gamecock offense.  Orth moved the South Carolina offense down the field, but the Gamecocks still failed to pick up points – managing only a field goal in the fourth quarter against the Aggies.

Through five games, South Carolina has scored just 70 points – averaging an anemic 14 points per game.  The Gamecocks did put up a season-high 378 yards of total offense against the Aggies, though – well above their 283-yard average entering the game.

A big chunk of that total came on a seventy-five yard touchdown run by redshirt freshman tailback A.J. Turner on the game’s first play from scrimmage.  Turner finished the game with a career-high 113 yards on ten carries.

The announced crowd for Saturday’s SEC home opener was 78,245 – but broad swaths of the east, west and south upper decks were empty.