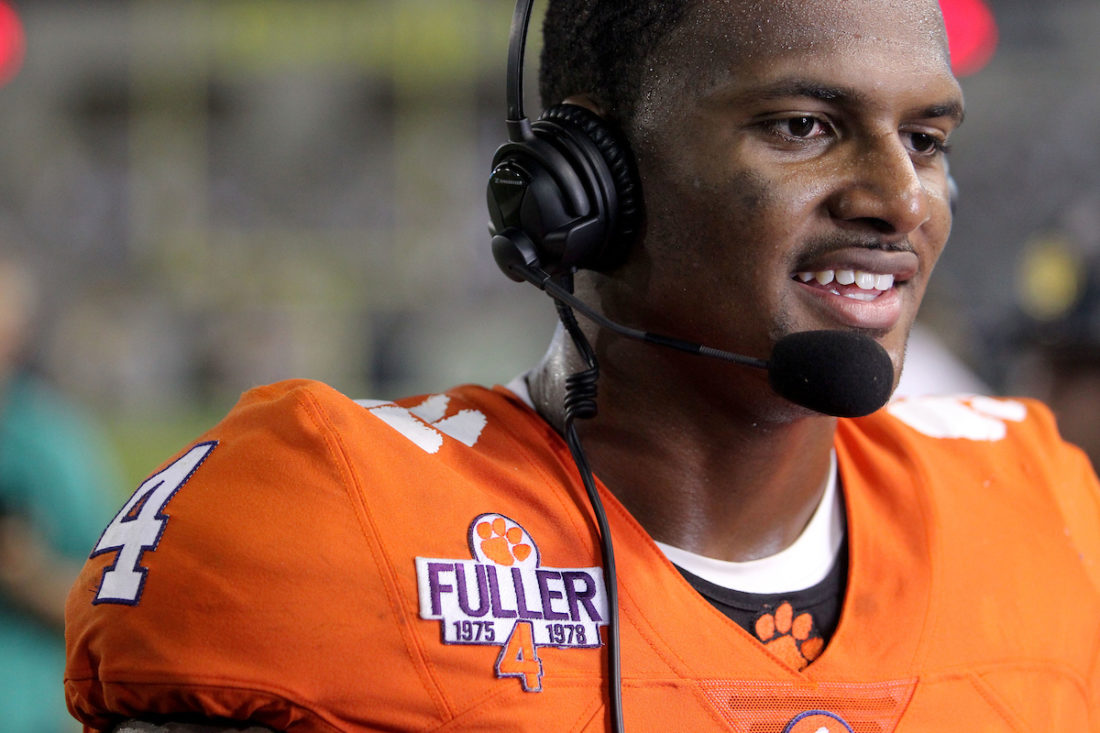 But it won’t be for lack of heart … or guts, as they say up in Tigertown, S.C.

Like its recent predecessors this team has “guts aplenty,” and it put that fortitude on display for the whole country to see in a primetime showdown that more than lived up to its advance billing.

No. 3/5 Clemson won its twentieth consecutive home game (and tenth straight conference contest) in thrilling fashion on Saturday evening against third-ranked Louisville – etching yet another signature victory for the program on the national stage.

For the second year in a row the team that was supposed to “Clemson” – i.e. choke in the spotlight – put that disparaging verb further in their rearview mirror.   In fact the Tigers (5-0, 2-0 ACC) now find themselves in the drivers’ seat for a second straight ACC championship – not to mention a second consecutive trip to the college football playoffs.

Sure, Clemson is still a long way away from those dreams becoming reality – but beating Louisville was a quantum leap in that direction.

After squandering an 18-point halftime lead, the Tigers’ shellshocked sideline looked up at the Death Valley scoreboard to see the Cardinals (4-1, 2-1 ACC) ahead by eight points midway through the final stanza.

Their 83,362-person home-field advantage – which had been producing record decibels earlier in the evening – had grown deathly quiet as Louisville’s Heisman Trophy frontrunner Lamar Jackson sliced and diced coordinator Brent Venables‘ vaunted defensive unit.  The 6-foot-3 sophomore from Boynton Beach, Florida carved up Clemson to the tune of 457 total yards – throwing for one touchdown and running for two more.

Of course Clemson’s offense continued giving Jackson the ball to work with – committing four turnovers on its first five drives of the second half.

Just when all seemed lost, though, Clemson … well, “Clemsoned.”

Watson’s two-point conversation attempt was picked off, but Clemson got the ball back almost immediately after Venables’ defense came up with its first stop of the second half.

Finally rid of the turnover demons, Watson marched Clemson’s offense down the field methodically.  On a critical third down play he found wide receiver Deon Cain for a 24-yard-strike, and on the next play he hooked up with with senior tight end Jordan Leggett for the go-ahead score with just over three minutes left on the clock.

Although overshadowed by Jackson’s heroics, Watson had a healthy stat line himself – completely 20 of 31 passes for 306 yards with five touchdowns and three picks.  He also ran for 91 yards on fourteen carries.

It wound up being enough … barely.

With its season on the line, Louisville put together a brilliant eleven-play, 72-yard drive against Clemson’s defense that showcased virtually every facet of Jackson’s electric skill set – the rocket arm, the deft cuts, the quick reads, the poise and maturity under duress.

The only problem?  Louisville needed one more yard than Jackson was able to give them.  On a fourth-and-twelve from the Clemson fourteen-yard-line, he hit wide receiver James Quick – but the speedy wideout was forced out of bounds one yard shy of the first down marker.

“We came up a yard short,” Cardinals’ head coach Bobby Petrino lamented after the game.

In previous years, such a “woulda coulda shoulda” moment might have been dubbed “Clemsoning.”

With each “gut check” victory, Clemson is claiming a new legacy for its program – while putting the Tigers one step closer to realizing their ultimate objective.