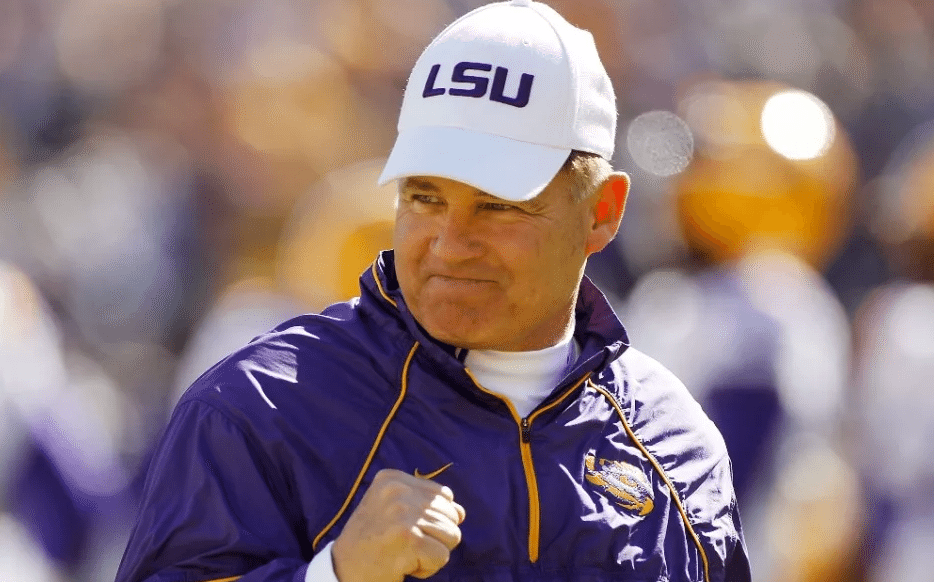 FOR REAL THIS TIME …

The Tigers (2-2, 1-1 SEC) will be led on an interim basis by Ed Orgeron, a former Ole Miss head coach and an interim head coach at the University of Southern California.

Orgeron posted a disappointing 10-25 mark at Ole Miss (including an atrocious 3-21 mark against SEC opponents).  He did go 6-2 during his brief tenure at Southern Cal, though.

Miles was nearly fired by LSU last fall after his team dropped three straight games in November, but a win over Texas A&M to close out the regular season prompted the school’s president F. King Alexander to give Miles a second chance.

Prior to LSU’s late-season swoon in 2015 it was the No. 2 in the nation and viewed as shoo-in for the second annual college football playoff.

Miles’ firing comes after a bizarre loss to Auburn in which the No. 18 Tigers appeared to win the game on the final play – only to have instant replay show that the game clock had expired prior to the ball being snapped.

Miles, 62, is known as the “Mad Hatter.”  He replaced Nick Saban at LSU in 2005, and led the Tigers to 114 wins, one national title, two SEC championships and three SEC West division titles in eleven-and-a-half seasons.

His 2016 team returned eighteen starters – including Heisman Trophy candidate Leonard Fournette – and was buttressed by the No. 3 recruiting class in America.  These were among the reasons why LSU entered the year with the No. 5 ranking in the country.

A season-opening 16-14 loss to unranked Wisconsin got things off on the wrong foot, though, and LSU never rebounded.

While Miles’ firing was viewed with shock and skepticism by many college football fans, the school was not without its justifications for pulling the trigger.

The bottom line?   Even though he boasted the best winning percentage in the history of the program, Miles simply didn’t produce the results the school was expecting with the talent he brought to Baton Rouge.

Despite bringing in four consecutive top five national recruiting classes, the Tigers have experienced a major drop off in on-field production since 2011 – the year they were defeated by Alabama in the national championship game (LSU hasn’t beaten the Crimson Tide since 2011).

Miles is 21-13 against SEC opponents over the last five seasons, which is an impressive stat line until you consider the talent he’s had to work with and the expectations that were created during his first seven years in Baton Rouge (when he posted a 41-15 mark in SEC competition).

The Tigers are also 4-5 over their last nine games and 12-10 in their last 22 contests against teams from one of the five “power conferences.”

Miles was widely discussed as a possible head coaching option for the University of South Carolina last fall – which was searching for a new leader right around the time LSU seemed poised to kick him to the curb.

The Gamecocks wound up settling for former Florida head coach Will Muschamp, who is 2-2 in his first four games at South Carolina.