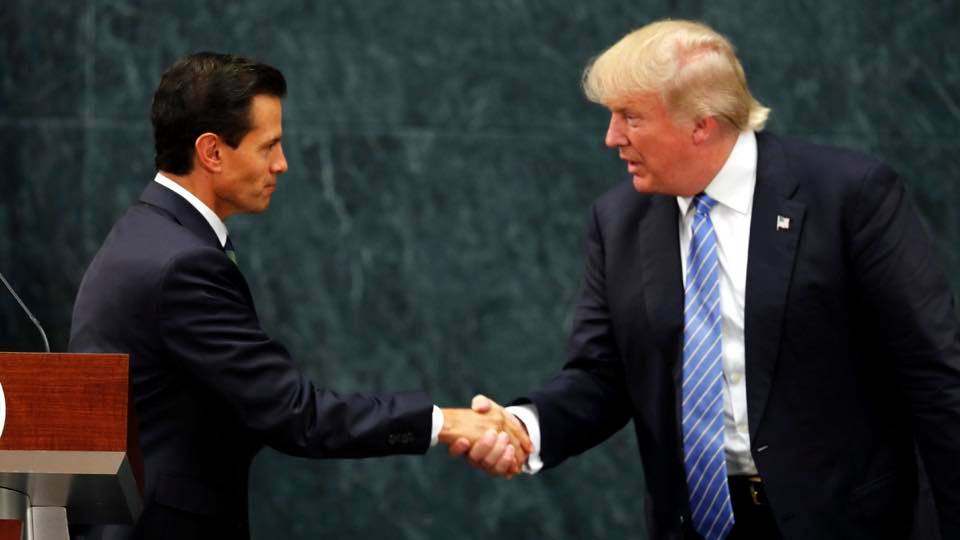 One week after appearing to backtrack on the issue of illegal immigration, GOP presidential nominee Donald Trump offered a comprehensive address firming up his positions on the issue.

The exchange between the two leaders was friendly – although it prompted a public disagreement over which nation would subsidize the border wall Trump wants to erect between the two nations.

Peña Nieto disputed that characterization of the conversation between the two leaders.

“At the start of the conversation with Donald Trump, I made it clear that Mexico will not pay for the wall,” he tweeted.

Nonetheless, the wall was agenda item No. 1 on Trump’s ten-point immigration reform plan.

“On day one, we will begin working on an impenetrable physical wall on the southern border,” Trump said.  “We will use the best technology, including above-and below-ground sensors, towers, aerial surveillance and manpower to supplement the wall, find and dislocate tunnels, and keep out the criminal cartels, and Mexico will pay for the wall.”

In addition to the wall, Trump’s speech vowed an end to U.S. president Barack Obama‘s “catch and release” policy, zero tolerance for criminal aliens and no federal funding for “sanctuary cities.”

He also reiterated his call to block government benefits for illegal aliens and reform illegal immigration in such a way as to “select immigrants based on their likelihood of success in U.S. society, and their ability to be financially self-sufficient.”

“It’s our right as a sovereign nation to choose immigrants that we think are the likeliest to thrive and flourish and love us,” he said.

Trump said if his ten-step plan is implemented, “peace and law and justice and prosperity will prevail.”

“Crime will go down, border crossings will plummet, gangs will disappear, and welfare use will decrease,” he said.  “We will have a peace dividend to spend on rebuilding America, beginning with our inner cities.”

While Trump stopped short of promising mass deportations, he did reiterate his promise that those who enter America illegally will not be granted citizenship.

“There will be no amnesty,” he said.  “People will know that you can’t just smuggle in, hunker down and wait to be legalized – it’s not going to work that way. Those days are over.”

Despite a month plagued by multiple missteps, Trump is locked in a tight battle with Democratic nominee Hillary Clinton in the critical swing states of Florida, North Carolina and Ohio.

However he trails Clinton by healthy margins in Pennsylvania and Michigan – two states he desperately needs to win if he hopes to capture the White House.