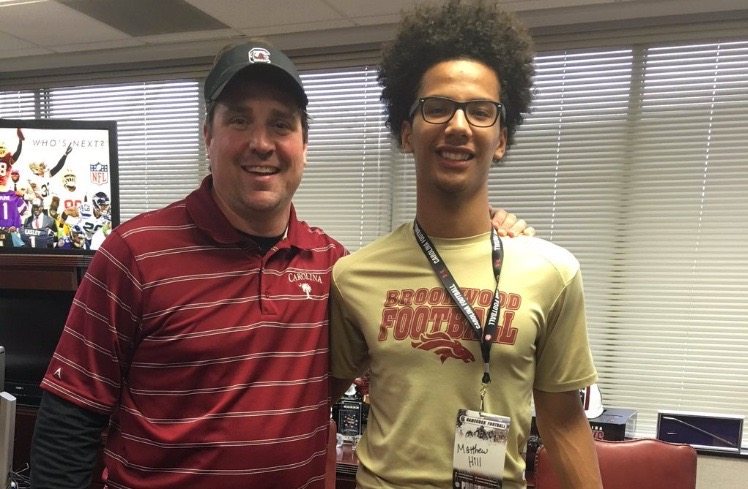 Edwards briefly de-committed from South Carolina last year (and considered attending Clemson University), but somehow Muschamp and his staff were able to keep him on board.

The 6-foot-3, 210-pound true freshman enrolled at South Carolina in January and is likely to compete for playing time immediately this fall.

How good is Edwards?  Take a look at this amazing, Alshon Jeffery-esque grab he made during practice earlier this week …

This week it was reported that another four-star wide receiver recruit – Matthew Hill of Snellville, Georgia – will be coming to Columbia, S.C. for (another) visit.

Good question … although he looks good in a Gamecock uniform, doesn’t he?

Hill – a member of the class of 2018 – is probably long way from making a decision on where he attends college. And given the breadth and depth of his offer sheet, our guess is he winds up taking his considerable talents elsewhere. But the fact South Carolina is competing for players of his caliber is encouraging.

Muschamp obviously wasn’t the Gamecocks’ first choice to be head coach. But upon inheriting program that went 3-9 last season (including a humiliating home loss to The Citadel), he managed to assemble a solid coaching staff and stave off a potential recruiting disaster.

Will those early “wins” pay off in actual wins on the gridiron? We’re about to find out …