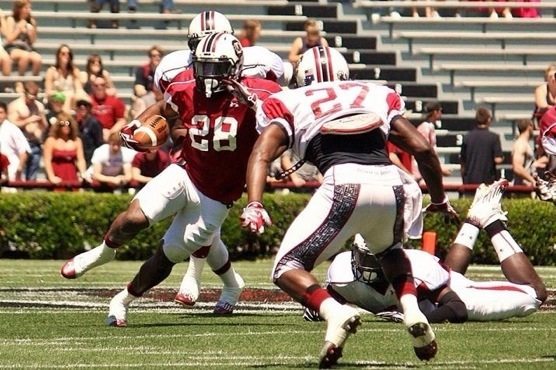 COLUMBIA, S.C. (August 10, 2013) – The University of South Carolina football squad went inside Williams-Brice Stadium on a warm Saturday afternoon and conducted its first scrimmage of the preseason camp.

“As most scrimmages we’ve had, nobody got hurt seriously,” said head coach Steve Spurrier. “It was hot today but that was good for us. We’re going to have some hot ball games and we need to get ready to play at 1 o’clock, 4 o’clock or whenever they tell us to play. “

The offense scored three touchdowns and added one field goal during the 44-play scrimmage that was split almost evenly between running (21) and passing (23) plays. Nick St. Germain got the scoring started when he capped the first drive quarterbacked by Connor Shaw with a 36-yard field goal. Shaw finished the day 3-for-10 for 27 yards with one interception.

“Connor did ok,” said Coach Spurrier. “He was a little slow on one throw and got one picked. T.J. Holloman made a nice interception on him. Give T.J. credit. He broke on the ball and picked it off. I think (Connor’s) back is a little stiff. He’s been running around and getting a lot of snaps. He might be a little weary-legged right now. He wasn’t as good as normal.”

Dylan Thompson, the second quarterback to enter the game, was the most effective signal-caller, hitting on 5-of-7 passes for 74 yards, including a 31-yard hookup with Shamier Jeffery. He also scored on a one-yard run on his first possession.

The Gamecocks showed off their deep and talented stable of running backs, as Brandon Wilds carried five times for 34 yards, Mike Davis logged four rushes for 27 yards, David Williams had three totes for 25 yards and Shon Carson added 25 yards on four carries, including a 15-yard touchdown on a sweep. Jamari Smith added one carry for six yards and also caught a 13-yard pass.

“The tailbacks ran hard,” noted the Head Ball Coach. “All five of them did well.”

Shaq Roland capped the scoring with a 55-yard catch-and-run from Perry Orth.

“Shaq caught a little 10-yard pass and turned it up for a touchdown there at the end,” said Coach Spurrier.

“The offense did some good things,” continued the Gamecocks’ ninth-year head coach. “I think it’s the first scrimmage since I’ve been here that there wasn’t a punt. The defense got one turnover and we didn’t make a fourth-and-five or so, but there was not any punting. The offense moved the ball good here and there. Dylan’s group scored two touchdowns – 70 yard drives. The defense did some good things, but overall, I would say the offense was a little bit better today. Now, the defense didn’t play any of their starters at all. It was sort of a young guys scrimmage. Some of the second (team) offensive linemen showed some improvement, so that was encouraging.”

The Gamecocks will hold their annual Fan Appreciation Day on Sunday afternoon at Colonial Life Arena. Doors will open at 1 and the team is expected to be on hand from 1:15-2:45 pm. Fans are reminded that the players will sign only the official team poster, which will be available for free, one per person.

The squad will return to the practice fields on Monday with the first two-a-day of the fall camp. The practice is closed.

(Editor’s Note: The above communication is a news release from the University of South Carolina’s sports information office. It does not necessarily reflect the editorial position of FITSNews.com. To submit your letter, news release, email blast, media advisory or issues statement for publication, click here).

The Triumph Of ‘Mud’

Dabo Swinney Is Feeling It