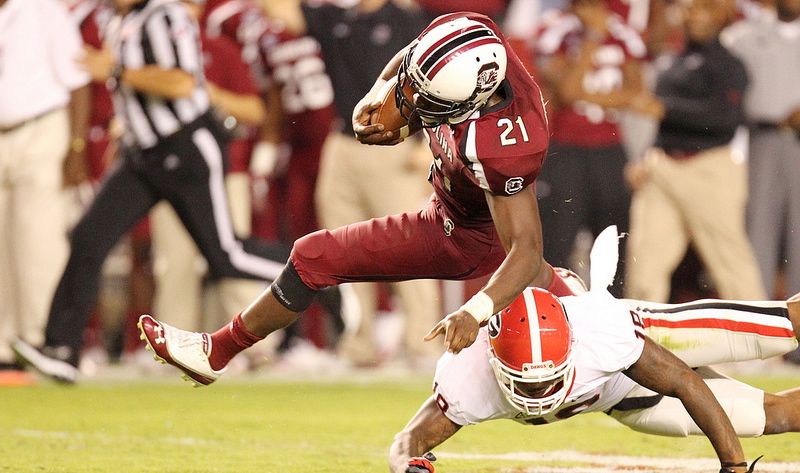 Former University of South Carolina superstar Marcus Lattimore is in the midst of yet another improbable comeback – one which could end him taking snaps in the National Football League this season.

After coming back from a season-ending injury to his left knee in 2011, Lattimore suffered a much more serious, career-threatening knee injury to his right knee last October which involved damage to three ligaments. In fact after watching graphic replays of the gruesome damage he sustained, many wondered whether the Duncan, S.C. native would ever play football again.

They shouldn’t have … this kid is all heart, people.

After undergoing surgery last November, Lattimore is reportedly making short work of his rehabilitation regimin. In fact according to USA Today, the Gamecocks’ career scoring leader is “three months ahead of schedule” on his recovery – and has added more than twenty pounds of muscle to his frame.

“He’s twice as far along as we ever expected him to be. He’s so self motivated,” orthopedist James Andrews told the paper. “This weight he’s put on has been all muscle, which is absolutely impossible in most cases.”

Andrew should know. His last client was Minnesota Vikings’ running back Adrian Peterson, who came within nine yards of breaking the single season NFL rushing record in 2012 a year after tearing his ACL.

Is anybody surprised by this?

In 28 games at USC, Lattimore rushed for 2,677 yards and scored a school-record 41 touchdowns. He also inspired teammates and fans alike with his selflessness on and off the field.

Lattimore elected to forego his senior season at USC to enter the 2013 NFL draft – hoping a team might take a chance on him in the late rounds. If he continues to put forth this kind of effort, though, expect his stock to rise rapidly.