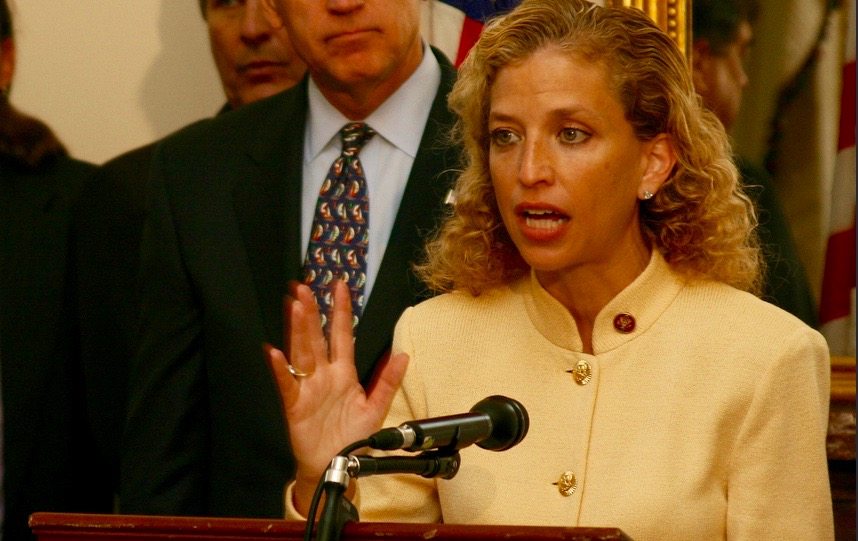 What happened?  #DNCLeaks … that’s what.

Wasserman Schultz and her staff were busted using the Democratic party’s ostensibly impartial offices to promote the establishment candidacy of Hillary Clinton – and attack the “progressive” insurgency of socialist U.S. Senator Bernie Sanders of Vermont.

Surely Wasserman Schultz – a Florida Congresswoman – would still be welcomed warmly by Democrats in her home state, right?

Wasserman Schultz – who was offered a job on Clinton’s campaign in the aftermath of the scandal – was booed off the stage when she attempted to speak to Florida’s convention delegation on Monday morning.

Her detractors refused to settle down, though … and eventually security was forced to escort the embattled congresswoman from the room.

Ironically, this raucous scene unfolded as Clinton’s campaign manager Bobby Mook referred to the “Republican” convention as an “angry mob.”

Guess it takes one to know one, right?

In the aftermath of her rude reception at the Florida delegation breakfast, Wasserman Schultz cancelled her plan to gavel the 2016 convention to order.  Or whatever passes for “order” in politics these days …

The #DNCLeaks scandal – along with Clinton’s choice of establishment U.S. Senator Tim Kaine of Virginia as her running mate – has enraged the “progressive” base of the Democratic party.  So has the release of an explosive new documentary entitled “Clinton Cash” – which highlights the extent to which Clinton and her husband, former president Bill Clinton, enriched themselves off of foreign governments and crony capitalist allies during the former’s term as U.S. Secretary of State from 2009-13.

Bottom line? It’s been an absolutely terrible week for Clinton … which is probably why her GOP presidential rival, Donald Trump, is now leading in national polls despite enduring a rocky convention of his own last week in Cleveland, Ohio.

Bernie Sanders Booed By His Own Supporters