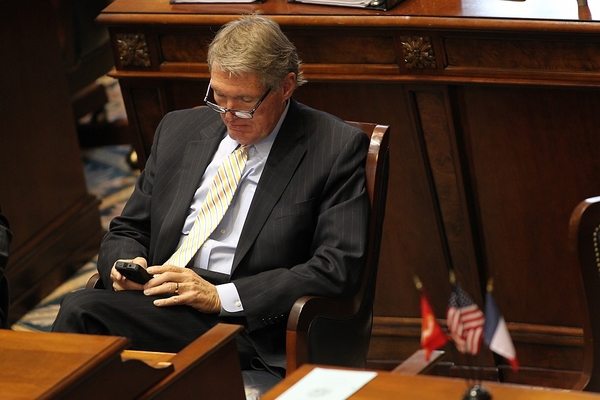 ELECTION TO FILL POST WILL BE HELD THIS WEEK

S.C. Senator Harvey Peeler of Gaffney, S.C. has resigned his position as “majority” leader of the state’s “Republican-controlled” Senate.  An election to fill his post will be held later this week – possibly as soon as Wednesday.

No indication yet what prompted Peeler’s move – which caught everyone at the S.C. State House completely off guard.

Just last month, Peeler filed for reelection to another term in the S.C. Senate – where he has served since 1981.  He’s been majority leader since 2005.

His decision does not mean he is stepping down from the Senate, only that he is vacating his leadership post within the “Republican” caucus.

Peeler is still in office.  In fact, he’s being challenged in the 2016 GOP primary for S.C. Senate district 14 (map here) by Charles Price Jr. of Boiling Springs, S.C.

In recent months, Peeler has taken a much more aggressive role on behalf of taxpayers in the Senate – teaming up with pro-free market Senator Tom Davis to block big government “Republicans” like liberal Senate president Hugh Leatherman.  Along with Davis, he’s also been one of the only politicians in the state to question wasteful transportation spending.

There’s been plenty of speculation regarding Peeler’s motivation for giving up his leadership post – with the Palmetto political rumor mill immediately kicking into overdrive.

One possible explanation?  A decade after taking the job, Peeler is simply tired of the grind associated with the high-stress, low-reward position.

“It’s a shitty job,” one Senator told us. “Very little power.  Massive headaches.  It’s a status thing more than anything.”

Anyway, we’ll keep our readers in the loop in the event we get anything concrete regarding Peeler’s decision.