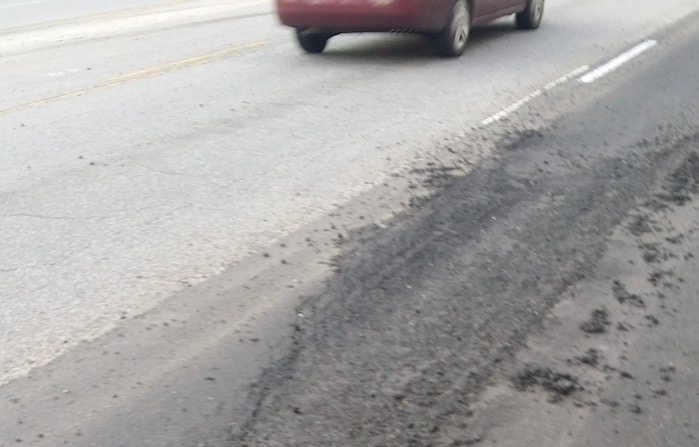 While S.C. governor Nikki Haley and her former college roommate (a.k.a. state transportation secretary Christy Hall) were busy bitching and moaning about transportation funding this week, we were forwarded some images of road “repairs” being conducted in Swansea, S.C. by the scandal-scarred S.C. Department of Transportation (SCDOT).

How are those repairs looking?

We knew SCDOT was a disaster but come on … how hard can this be?  This is your JOB.

Haley has been attacking the S.C. House of Representatives this week for its ostensible support of “wasteful” transportation projects.

The governor has been cheerleader-in-chief for THE wasteful transportation project in South Carolina: Interstate 73.  This $2.4 billion road – which state leaders have included in a so-called “shortfall” in highway funding – clearly doesn’t need to be built.  Why not?  Because studies have shown that the traffic issues it seeks to mitigate could be addressed far better … for one-tenth the cost.

Don’t get us wrong: South Carolina’s roads and bridges desperately need to be better maintained and more frequently repaved/ repaired.  In fact we’ve consistently argued throughout the debate over infrastructure funding that doing so is a core function of government – to say nothing of a cost-saver in the long run.

Also this is the perfect time to repave …

Unfortunately, SCDOT continues to put wasteful projects ahead of long-overdue repairs – and when it does finally get around to those repairs, the results are not good. This agency has seen its base budget nearly double over the last seven years – and it is getting hundreds of millions in new recurring money on an annual basis starting this year ($400 million in new recurring money).

That is a massive investment of taxpayer resources … one that should be more than sufficient to address the core needs of the state’s highway system (assuming, of course, that the SCDOT stops approving dozens of politically-motivated projects).

Seriously: This agency needs to get its act together soon …

After all, Nikki Haley and her allies cannot insist on more authority unless she proves there is accountability over the billions of dollars her agency is entrusted with to keep our roads and bridges in working order.