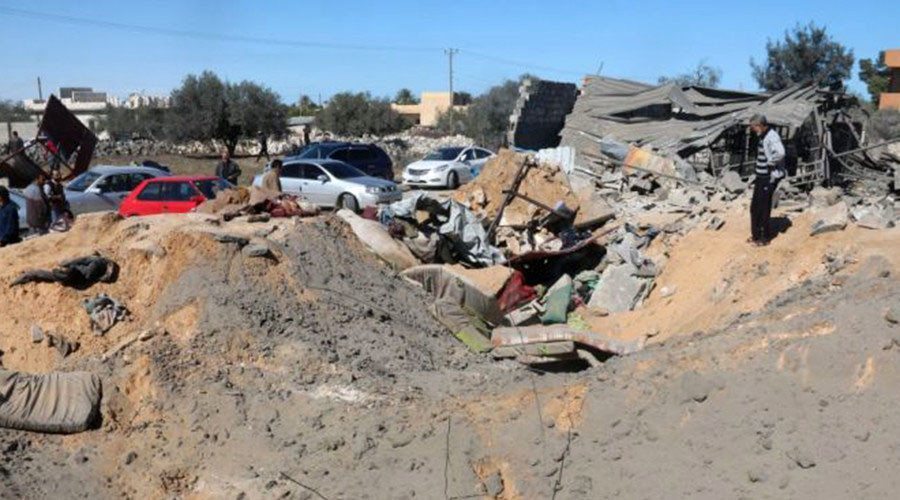 || By RON PAUL || The use of the US military overseas seems to have become so commonplace that the administration of Barack Obama can bomb a country with no Congressional input and very little media interest at all. Such was the case on Friday, when the US military killed some 49 people in a bombing run near Tripoli, Libya.

We had to bomb Libya, we are told, because Libya has become a hotbed of ISIS activity. The group has been moving training facilities into the country, taking advantage of the chaos. Ironically, it was five years ago this week that the “Arab Spring” uprising began in Libya — an uprising that was supported by US military force and led to the overthrow of the Libyan government and the murder of its leader, Muammar Gaddafi.

We were told that the US had to intervene to overthrow Gaddafi so that democracy and human rights could flourish, yet five years after the US-led intervention no one would argue that the country is better off. Instead of bringing Libya democracy, US intervention brought Libya ISIS. So now the US has to go back and bomb Libya some more to take care of ISIS.

Will this work? No. Logic tells us you cannot do more of what caused a problem and expect it to fix the problem.

As Middle East analyst Hillary Mann Leverett observed after Friday’s US attack on Libya, “the problem is, for each one of these targeted killings, what we have seen in the data that at least two more people sign up to join.”

The United States has made a habit of lecturing other countries about the need to follow the rule of law, yet this seems to be a matter of “do as we say, not as we do.” How else can we explain a US attack overseas with no Congressional input? Certainly there was no Congressional authorization for Friday’s bombing. The Administration claimed that its authority came from the 2001 authorization to use military force against al-Qaeda in retaliation for the attacks of 9/11. But ISIS did not even exist on 9/11. How can the 2001 authorization be twisted to include bombing Libya in 2016?

Libya has been in chaos since its 2011 “liberation,” but the country’s interim government strongly objected to Friday’s US bombing, claiming they were not consulted before the US attack. They called US air strikes a violation of Libya’s sovereignty and of international law.

They have a point. But the most important point we must learn from the destruction of Libya – and of Syria, Iraq, Afghanistan, and so on – is that US interventionism has been a complete failure. Hundreds of thousands have been killed in the last 15 years, societies have been broken apart, economies have been destroyed, and property has been flattened. There are no success stories. The neocon plan to remake the Middle East has only succeeded in destroying the Middle East. As a consequence, we are far less safe than before the “war on terror” was launched. ISIS and other terrorist groups have expanded their territory and have even been able to attack in Europe and the US. Our currency has been debased to pay for the trillions of dollars spent in this no-win war. The connected elites have gotten rich while the middle class has gotten poorer.

Intervention has failed. It is time to stand up to the neocons and their liberal interventionist collaborators and say “no more!”

The Pope Versus The Donald