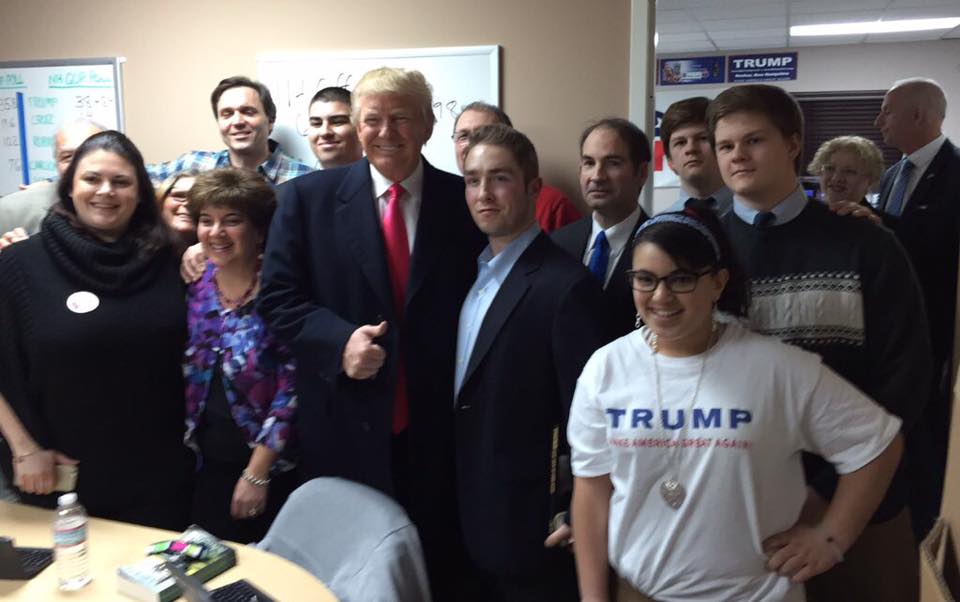 Say what you want about national GOP frontrunner Donald Trump, but he’s got his star power working for him in a big way in early-voting South Carolina.  Trump’s Palmetto State rallies have been jam-packed affairs – many of them drawing more than 5,000 attendees.

Later this month, Trump will visit Sumter, S.C. – a city of roughly 40,000 people located about an hour’s drive east of the state capital of Columbia, S.C.  Trump’s Sumter visit – scheduled for 7:00 p.m. EST on February 17 at the Sumter County Civic Center – was announced by his campaign earlier this week.

Here’s what happened next, according to the Sumter Citizen …

“Within 24 hours of Sumter Citizen announcing Trump’s plans to come to the Gamecock City, more than 1,200 of the literally thousands of visitors to our website had used the links provided by the post to visit the ticket registration page for his campaign,” the website reported.

This “explosion” of online activity “illustrates the massive amount of interest in the Presidential candidate.”

But can Trump translate that interest into votes?

He did (to some extent) in early-voting Iowa … finishing a close second to U.S. Senator Ted Cruz of Texas in that state’s activist-driven caucus election this week.  Next Tuesday, Trump looks to win New Hampshire’s quasi-open primary – where he enjoys a big lead in the polls – and then roll big in the “First in the South” open primary here in early-voting South Carolina.

Not so much in Arkansas, though. Trump is a pathological liar.

I know most of you don’t, but make sure to vote for Trump in the primaries. We’re counting on you!

The headline tells you all you need to know about the average voter in SC. Maybe he’ll choose one of the Kardashians as his VP.

It would be somebody like that; or Omarosa… or Brett Michaels… or the ghost of Joan Rivers.

Really, any reality TV star will do.

I think you may have hit on the perfect choice.

Baby mama drama could make him popular. Adultery is almost a prerequisite to win in SC as it is anyways.

Why the need to explain where and how big Sumter is? It is the states 8th most populated city. It is pronounced with a “p” like “Klempson.” SUMPTER!! Got it.

We could ask you the same thing.

Ah yes, the roaring 20’s!!! What time for young love once you got past the Pantaloons and corsets.

“Donald Trump’s Star Power Working For Him In SC”…anything like the “Star Power” of that other politician you backed, T-Rav. Yep “Star Power” that’s the number one qualification to be President.

But Trump let Will step on his super fancy jet plane.
Bam! He’s qualified to be President!

Maybe Will has some of those New York values.

Doubt it. Then he wouldn’t be a loser stuck in SC.
Besides, Will is a real deal “libertarian”. For really, reals!

Probably on Trump’s 757 getting the inside scoop/ look at the inner workings of the Trump machine! It’s yuuuuuughe!!!!!

AAAAAARRRGGH..!! THERE’S STILL THE MUSIC OF 76 TROMBONES ECHOING IN MY HEAD — IF THERE IS A GOD PLEASE MAKE IT STOP…!!!

For those of you not familiar with the film “Music Man” starring Robert Preston and Shirley Jones, it takes place in River City, Iowa. Anyway, Donald Trump acts exactly like Robert Preston in his role. Every time I see Trump any one of the songs in that film pops into my head (and I do have a few favorites). Trump even resembles Preston in his character role.

We got trouble… right here in River City.

Bitch, you forgot me! Don’t make me angry. You wouldn’t like me when I can angry. I”ll stab you in your belt buckle!

Hey, that’s the photo I took at the FITS offices last month. Taylor couldn’t make it, but she got a ride in the limo back to the airport.

I seriously doubt that Mrs. Rocky, in her incomparable beauty, would allow herself to be photographed in that crowd. And I don’t think you would either, it’s just that my morning caffeine probably had not kicked in yet and I was in a stupid mood.

His “star power” didn’t work so well in Iowa.

Anybody notice how Trumps fortunes went to shit after Fits endorsed him? I see problems in South Carolina.

There is a misspelling in the article. The town The Donald® is visiting is Scumter also know as the arm pit of the universe or Satan’s Asshole.

Friends that used to live there. It has a serious crime problem. I try to avoid it if at all possible.

How does a town of 40,000 people have a Civic Center that hold 3,500 people. Doesn’t the County Fairgrounds do good enough?

When was that court date again,lead counsel? Feb 16th?

It appears that Trump will win in New Hampshire, gaining some momentum. One of the ways to stop Trump would be for Rubio or Cruz to withdraw from the race and consolidate support to stop Trump. That won’t happen, looks like a three-way race from this point with Trump leading with a plurality, not a majority. Getting the line of secondary contestants(Bush, Kasich, Christie, etc.) out of the race would be interesting to see where their tally of votes would fall.

As long as Trump or any other contestant is not able to start gathering a majority of votes in the state primaries, it will remain a crowded field while allowing the laggards to maintain hope and stay in the race. In the long run, it is beginning to look like Trump in a long slough through a crowded field.

The RNC will blowup the National Headquarters, with their sister organization the DNC, before they allow that. May even use it to try starting a new war somewhere, win-win.

Why is he hanging out with a bunch of kids with Down’s Syndrome, while impersonating Bob Dole?

Beacuse that’s his base

Then why weren’t you there?

Because I’m not retarded or a Trump supporter.
Jealous?

After the trip to Arkansas to round up their nifty legislators prone to making nursing homes free from liability as the top legislative donor is the guy running the kind of nursing homes that gets people killed; Trump thought he’d clean up on the white supremacist vote, too. Seems to be working.

At least as a way of burning money.

Wonder if he can Make Sumter Great Again ?? That sardine can we were in in Lexington was over the top. For someone of Trump’s caliber we need Williams Brice Stadium. Has anyone noticed , he doesn’t have to beg his listeners to applaud for him ? Just saying.

So let’s go over all the picks of the dim wits who post on this site and SC politicians.

Rafael Cruz – Creepy Canadian born son of weird evangelist who believes his son was anointed a King to bring about a great transfer of wealth from the wicked to the anointed Priest of the Church (like him) and who was a former communist and supporter of Castro and who came to the US illegally. In addition Cruz is reviled by anyone who has ever had anything to do with him, from his college roommate to the people he served in the Senate with.

Marco Antonio Rubio – Establishment choice who is in the pocket of the Koch Brother, i.e. he is bought and paid for. He Flip Flops on immigration, and anything else he thinks will get him elected; and who is to boot an anchor baby whose parents came to the US under undisclosed circumstances. Rubio was one of the candidates who made the pilgrimage to California to kiss the ass of Koch and beg for money.

Jeb! – what more can i say? Dubya II. Owned by the billionaires. Soft on immigration.

I have never voted for a Democrat and I am 60 years old. If Donald Trump doesn’t get the GOP nomination then he will most likely run as an Independent. I will vote for him, knowing that this will probably hand the general election to either Bernie or Hillary. It may take one of them being elected for this country to wake up to reality. So let’s get it on.

Yep, if Cruz or Rubio is the Republican Nominee, after 30 years of voting GOP I will look elsewhere.

Sumter needs some entertainment. Place is a shithole.