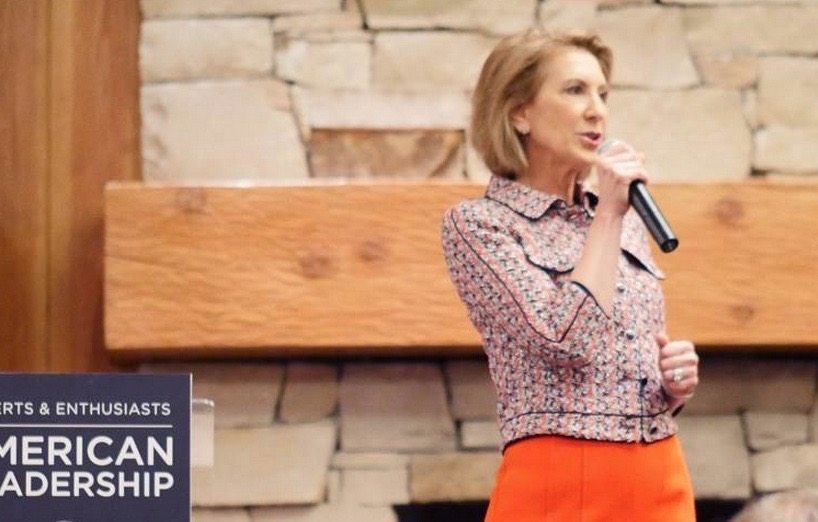 || By FITSNEWS || Former Hewlett-Packard CEO Carly Fiorina – who has emerged as one of the “Republican” party’s most pointed, articulate critics of presumed Democratic nominee Hillary Clinton – is getting some early support in early-voting South Carolina.

“As a business owner myself, I believe that we need someone with real-world experience who understands how the economy works,” Hicks said in a Fiorina campaign release obtained by FITS. “Carly has a very successful track record at HP and then worked hard leading both Good360 and Opportunity International to help provide for those around the country and around the world who are hurting. We need Carly’s leadership in the White House.”

Hicks’ support “means a lot to us,” said Taylor Mason, the South Carolina Political Director for CARLY for America.

“She recognizes what we all do – that Carly Fiorina is the fresh candidate who will turn the conversation around,” Mason added. “More than ever, leaders need to overcome the simplified platitudes being tossed around in these very serious discussions about the future of our country. Carly’s thoughtfulness and directness is what American voters have desired, and gone without, for far too long. Carly is the candidate the GOP needs to reclaim the White House.”

Most believe Fiorina – who is still polling in single digits nationally and in early-voting states – is angling for a spot on the national ticket.

“Going To The Candidates’ Debate …”

Fine lady, good business leader, would most likely make a good POTUS. But sadly too far down the line to have a chance. I would like to see all the lessor candidates pick one of the winning level candidates and throw their support to them. It would save a lot of campaign funds and potentially hard feelings. You just know that sooner or later the gloves are going to come off. I hope not but I also know SC Republicans.

“Feb 14, 2005 … Carly Fiorina resigned as CEO of Hewlett Packard last week under pressure from the board and shareholders. She will get a severance package worth about $21.4 million. The share price of HP stock has fallen over 50% since Fiorina took over in July 1999.”

I guess only little people suffer when they lose their job . Job creators and destroyers like Carly, are above all that.

Big field only downsize is GOP spends and donors give lots of $$, then after GOP Convention the race gets very expensive with candidates looking for $$

This lady is just another full of crap, pretend candidate. She needs to get her early life story straight, before she can expect people to take her seriously. Even then, they won’t.

what part of her life story- you people like msm throw out some knuckleheaded disparigment then walk off no evidence, no idea what it deals with you just plant a seed of doubt

I figured it was Lee Bright who supported her, since both of them know how to run a business into the ground.

Am I the only one here who thinks the way she’s holding that microphone is obscene?

did you say the same abt hillary

I see what u mean, a spurt just hit her eye, good call. I still won’t vote for her, but a visit could change my mind.

What I’m looking at is those slim hips thrust out and a small tummy bump — those are the kind that will grind me into near insanity.

I’m going by the foto, since I’ve never heard her speak.

More wasted money. Its between Trump and Bush. The lady that ran HP into the ground ain’t going no where.

She cut HP’s market cap in half in a little over 5 years, dare we dream she could downsize the Federal government similarly?

She went into her job at HP to help HP and did the opposite. If you send her in to the federal government to cut government, she will probably end up doing the opposite.

Hopefully Hicks doesn’t take a page out of Carly’s book or her business might tank.

Wonder what her thoughts are on the 2nd amendment?