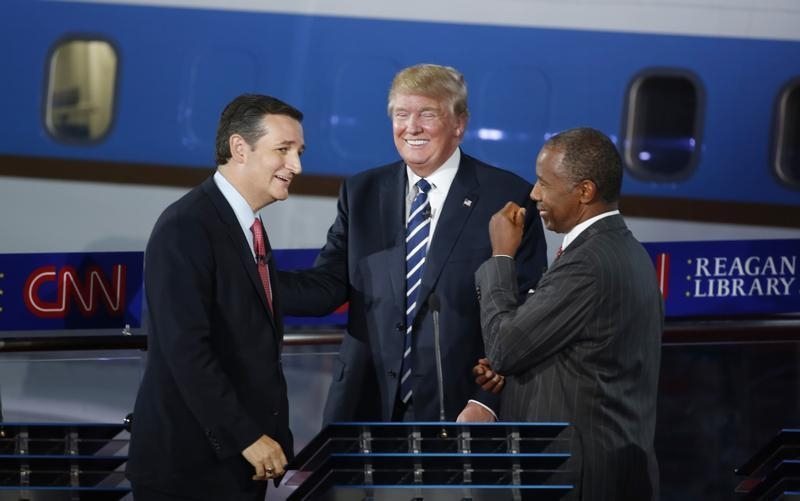 U.S. Senator Ted Cruz of Texas has run a disciplined, substantive, data-driven campaign – a modern candidacy in every sense of the word.  And with one early-voting “Republican” state officially in the books, he’s the only GOP candidate currently running a winning campaign.

With boasts of bigger victories to come …

Retired neurosurgeon Ben Carson, on the other hand, has been a dud.

After peaking last fall, Carson’s campaign has completely imploded.  In fact we’ve been wondering for weeks why he hasn’t dropped out of the race already.

As Iowans went to the polls on Monday night to cast the first votes of the 2016 election cycle, Carson briefly seemed to be doing just that … at least according to Cruz’s campaign.

Take a look at this email obtained by Gawker … 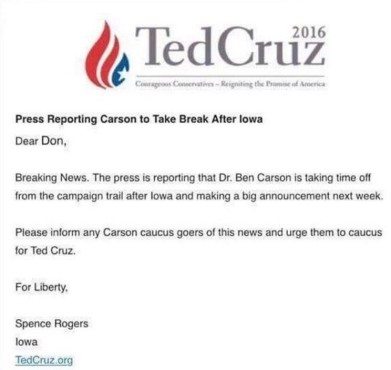 This email – broadly disseminated as GOP voters filed into precincts across the state – seems to have been deliberately intended to depress Carson’s turnout while boosting support for Cruz.

All under the guise of MSM officialdom, no less …

“They executive it perfectly,” a veteran national operative familiar with such tactics told us.

The ruse was also advanced by U.S. Rep. Steve King of Iowa, one of Cruz’s national co-chairmen.

“Carson looks like he is out,” King tweeted.  “Iowans need to know before they vote. Most will go to Cruz, I hope.”

Cruz apologized the following day to Carson, calling the email “a mistake.”

“Last night when our political team saw the CNN post saying that Dr. Carson was not carrying on to New Hampshire and South Carolina, our campaign updated grassroots leaders just as we would with any breaking news story,” Cruz said in a statement to CNN. “That’s fair game. What the team then should have done was send around the follow-up statement from the Carson campaign clarifying that he was indeed staying in the race when that came out.”

King also later said that he regretted “any miscommunications” regarding Carson’s intentions.

The network blamed for the snafu?  It having none of Cruz’s “fair game” claim.

“CNN reported that the retired neurosurgeon planned to go home to Florida after the Iowa caucuses rather than flying straight to New Hampshire or South Carolina,” the network stated.

Obviously that’s not the same thing as “taking some time off” from a campaign.  Also, Cruz’s campaign has yet to say where it came up with the news that Carson was planning a “big announcement” in the week following the caucus.

Carson was livid over the email.  He wasn’t going to win Iowa, obviously, but he and Cruz were competing hard for many of the same voters – including evangelicals.

“I think whoever is responsible for blatant lying should be dismissed, absolutely – unless that kind of behavior is acceptable in your campaign culture,” he told CNN.

And while he accepted Cruz’s apology, Carson added that “it doesn’t correct the problem.”

“This is a cultural issue when people in your campaign feel that it’s okay to distort the issues to their political advantage and to tell absolute lies,” he said.  “And the question really is will there be any consequences for that.”

As we’ve stated previously, Cruz is one of the better “Republican” candidates in our estimation.  In fact we came very close to endorsing him because he has a fairly consistent record on the pro-free market, pro-liberty issues that matter to us.

He also told truth to power in Iowa, taking on the state’s powerful ethanol lobby by opposing subsidies for their product very early in the process.

But the one thing we’ve never cared much for as it relates to Cruz is his sanctimonious, holier-than-thou moralizing – which is all about attracting evangelical voters.

We wonder: What will evangelical voters in South Carolina think when they learn that Cruz’s campaign is basically willing to lie to get ahead?

Seriously: Isn’t there a commandment against that? One that actually pre-dates the Eleventh Commandment of Ronald Reagan?  Something about not “bearing false witness against thy neighbor?”

Yeah … Cruz broke that commandment (and Reagan’s commandment) in Iowa.  Big time.  All so he could get a leg up with Christian voters.

And while it may have achieved its initial objective, he’s now got a “cheater” label to deal with … not to mention a tainted win.