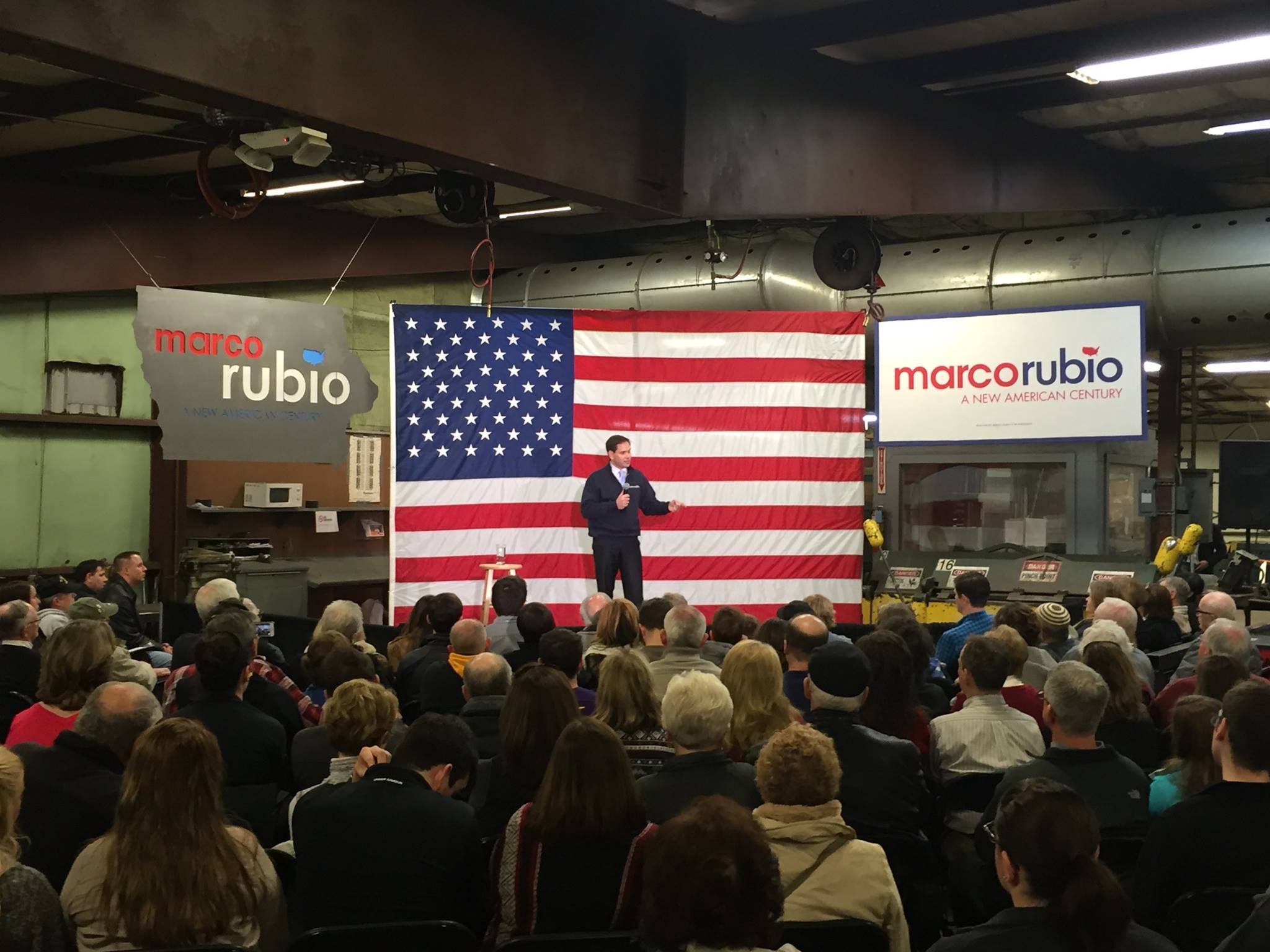 A couple of interesting developments on the campaign trail for U.S. Senator Marco Rubio of Florida … neither of them good.

Rubio is attempting to use this issue to attack one of his rivals, U.S. Senator Ted Cruz of Texas, as being soft on terrorism.

“If ISIS had lobbyists in Washington, they would have spent millions to support the anti-intelligence law that was just passed with the help of some Republicans now running for president,” Rubio said during a recent speech in New Hampshire.

Of interest, though?  Some of Rubio’s top supporters – including U.S. Rep. Trey Gowdy of South Carolina – supported that legislation, too.  In fact Gowdy and U.S. Rep. Darrell Issa of California were co-sponsors of the bill in the U.S. House.

We contend this legislation did nothing but modify the government’s mass snooping capability, but the political fight over its passage is obviously creating some serious headaches for Rubio – an aggressive proponent of the American spy state.

In other Rubio news, there’s a report in The Wall Street Journal causing him some problems as well …

According to reporter Reid J. Epstein, Rubio had an embarrassing “oops” moment on the campaign trail in Iowa in discussing the issue of immigration (a.k.a. one big reason he is struggling to connect with “Republican” primary voters).

“There is no one running for president now or in recent memory who understands the issue, and personally, better than I do,” Rubio told a crowd of 150 Iowans.

Moments later, though, he seemed to confess ignorance in discussing the exploitation of America’s current immigration laws – including the K-1 “fiancee visa” Tashfeen Malik used to gain access to this country.  Malik is one of the two perpetrators of the December 2015 San Bernardino mass shooting – which U.S. president Barack Obama has attempted to pin on guns (as opposed to the radical Islamic terrorists who actually perpetrated the crime).

Anyway … Rubio has been talking tough on this issue as he attempts to pin the blame for the rise in terror on the complacency of his “Republican” rivals.

“Who knew there was a fiancee visa?” Rubio said during his Iowa speech.  “Most Americans didn’t.”

In fact, his own proposed immigration bill explicitly permitted these visas.

“Of course I knew,” Rubio later acknowledged. “Obviously, people who are involved in the immigration debate know that it exists but the vast majority of Americans were not aware that there was such a thing as the fiancee visa.”

Still, that’s a curious statement given the extent to which Rubio pushed for fiancee visas as part of his expanded “open borders” policy.  Seriously: Rubio’s so-called “Gang of Eight” liberal immigration proposal expressly included these visas … but now that a radical jihadist who used one of them has killed fourteen people, Rubio is suddenly pleading ignorance.

“It’s tough to get at who is with him and against (him),” a consultant who is advising one of Rubio’s rivals noted. “(Or) what he knew and didn’t (know).”

Although not as exciting as all of Rubio’s alleged mistresses, these are two more compelling reasons to oppose his candidacy … not that we needed any.

Nikki Haley To Deliver GOP Response To “State Of The Union”

David Beasley Got A Nice Voicemail From Donald Trump

Someone Is Cybersquatting On Carly Fiorina

Actually, it’s par for the course.

whats with the idiot quotes on “fiancee visa”? is it your position that americans should only breed with other americans? or that nobody should be allowed to bring their spouse to the US? or is this another type-first, think-later piece?

Where did the Special Interest influence come
from to get King Obama to overreach immigration law and overrule the caps on
foreign workers? This is getting
ridiculous if it wasn’t sad for citizens and lawful residents. Do we not have
92 Americans seeking work, poorly paid jobs part time employment, or just not
bothered to drudge through the elements in many Northern states to be hired?
When has it become the law that illegal aliens should have a priority over
Americans? For me, this is why I am voting for Donald Trump as he will being backed
some saneness to the job market, and introduce MANDATORY-E-VERIFY to exclude
unauthorized labor from jobs in every state.

Trump will rescind every executive order that
Obama has ever passed, and return sanity to our society. As these Democrat,
Liberal and GOP syndicate pen driven orders to import into our nation more
voting Democrats–illegal or legal, or Republican establishment politicians all
financial puppets of big business, for swathes of cheap working hands.

How crafty these politicians are reeking of
corruption, when the executive order was released on New Years Eve, thinking
that it would be overlooked by Conservatives or the Tea Party?

This is why we need a top business magnet as
Donald Trump, who will build the wall and enforce immigration laws as never
before. The wealthy campaign
contributors may have the Hillary Clintons, Jeb Bushes under the seedy thumb,
but they will not inherit one slim nickel for Trump, as he owes no allegiance
to the powerful controllers of the special interests.

Remember these reasons when you vote in the
Iowa Caucuses, the primaries and all the way to the 2016 election. I am doing
my part, so get the vote out. Let’s have a President that knows his duty to the
American people. Not foreign countries to donate to underhand foundations as
Bill and Madam Clinton. Not to the Hierarchy of the GOP syndicate, who do the
bidding of corporate and the industrial complex, which are there to influence
their votes in Congress.

As Americans gathered with loved ones to wish
each other a more prosperous new year, the president issued an edict to put
that longed-for prosperity farther out of reach.

In a proposed federal rule published on New
Year’s Eve, the president decreed that hundreds of thousands of additional
foreign workers will be licensed to replace American workers at lower pay.

Congress must act with urgency to stop him.

The president’s nearly 200-page rule bypasses
federal immigration caps, increasing significantly the number of foreign
nationals authorized to work in the country above the limits set by Congress.
These lower-paid foreign workers will be able to take jobs in technology firms,
neighborhood pharmacies, energy companies, local schools, public
administration, civil engineering, and innumerable other professions both
sought and filled by millions of Americans. Whether young American graduates who
are seeking that first job or longtime workers seeking that well-earned promotion,
countless Americans will now find their chosen careers in jeopardy to foreign
workers.

The number of aliens authorized to work in the
United States each year is limited
by law, according to the number of foreign work visas and green cards that are
statutorily available. Under this breathtaking executive action, those limits
set by Congress are waived.

Here is how the scheme works: Under current
law, there is a statutory cap on the number of aliens who can receive green
cards based on sponsorship from their employers, and thus a cap on the number
who can receive the all-purpose work authorization those green cards provide.
Under this new rule, the administration can bypass those caps with two easy
steps.

First, it would simply approve as many aliens
as it wishes to seek green cards in excess of the cap. Then, it would give
those workers—and their spouses and children—a renewable all-purpose work
permit while they wait for their green cards to become available, nullifying
Americans’ statutory protections against job-threatening flows of excess
foreign labor. Adding further to the pool of workers, it expands the number of
H-1B visas exempt from the annual cap.

Brazenly, the proposed rule would also result
in the automatic renewal of work permits for aliens who, among other things,
merely file applications to have their deportations canceled or asylum granted.
It is as if these policies were designed to create chaos and disorder.

This lawless action comes at a time when
immigration is already at an all-time high. The total foreign-born population
is at a record-breaking 42.4 million, having more than quadrupled since
immigration caps were raised five decades ago. Excess labor supply has already
helped drive down today’s median household income more than $4,000 beneath
levels at the turn of the century.

Pew reports that Americans want immigration
caps reduced—not increased—by an overwhelming 3:1 margin. That same Pew report
shows that new immigration will add the population equivalent of 25 cities of
Los Angeles over the next fifty years—unless Congress acts to reduce the annual
allotment of visas.

But instead of answering the public’s demand
to curb the intake of foreign workers, Congress has worked with the president
to expand it—most recently in the omnibus spending bill. In fact, provisions I
offered that would have helped to prevent this and other executive actions were
rejected by those crafting the omnibus legislation.

Instead, the omnibus dramatically expanded the
supply of H-2B foreign workers to fill positions in construction, hospitality,
truck driving, and many other blue-collar jobs.

When it returns to session, Congress will have
to decide: Will it take meaningful action to block the president’s new
incursion, or will it continue making only empty gestures of opposition while
acquiescing to the president’s agenda?

Voters want immigration growth halted. The
more the governing class ignores these demands, the more they lose their
authority to govern.

Facts you will not find in the mainstream
press, are reported at Judicial Watch at http:www.judicialwatch.org.

GET OUT THE VOTE FOR DONALD TRUMP. WE NEED THAT CHANGE IN THE
PRESIDENCY AND CONGRESS?