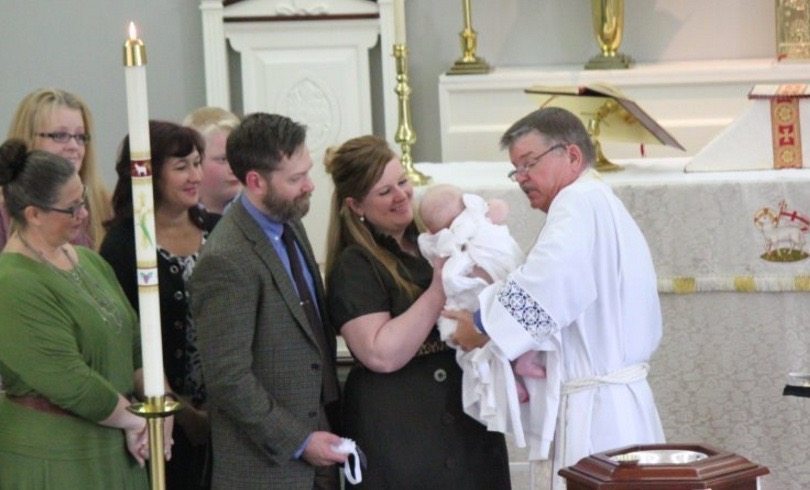 Brad Eckstrom – the son of S.C. Comptroller General Richard Eckstrom – is suing his ex-fiancee for full custody of their minor child.

This, of course, is the little girl that Richard Eckstrom reportedly accused this website’s founding editor of fathering (well …until the paternity test came through).

Anyway, according to court documents Eckstrom is suing his ex-fiancee Blair Pettrey for custody of the couple’s seven-month-old daughter.

Pettrey wasn’t immediately available to respond to the lawsuit.  She is reportedly represented by the Rockville, Maryland-based law firm of Ethridge, Quinn, McAuliffe, Rowan and Hartinger.

Brad Eckstrom, 39, received pretrial intervention last fall after criminal domestic violence (CDV) charges were filed against him for allegedly punching, kicking and grabbing Pettrey.  Eckstrom’s record has been expunged, though – a sweetheart deal that was announced right as “Republican” leaders in South Carolina were vowing to take “action” on the issue of domestic violence.

Donald Trump: Fit As A Fiddle

Kid’s out of state, she lives in a place where there are real attorneys. Good luck Muchacho!!!!

That’s actually fairly typical in lots of cases, particularly CDV cases.
Just look at the 1+ year old Lexington County case of the dad you killed the 5 kids and took the bodies to Alabama.
CDV victims are usually so beat down and lacking in income; the perps such sociopaths, family court judges have been manipulated into doing just that more than you would think possible,

My thoughts exactly. Otherwise he would have taken action much quicker. Took him seven months to realize how much child support payments cut into his beer money. He’s hoping she will let him out of child support payments. A TRULY CARING FATHER WOULD NEVER ATTEMPT TO TAKE A BABY FROM HER MOTHER. Blair – you go girl!

Hold up just a minute. There are plenty of situations in which a caring father would try to get full custody. This isn’t one of those situations.

I know of three men in state that have all received custody because their former wives were complete losers. It’s rare, but to your point it does happen and usually it’s better for the kids in those cases.

During my personal period of Hell in Florida (80s), short of murdering a dozen cops during a bank robbery there was no way a Father was going to get custody of his kids. If she died, her Mother or Sister generally had higher standing. The judges treated bad mothers like a failing Public School. Instead of shutting it down, the answer was always making the Father pay more $$$. At the peak, I was paying $385 a week (first two years) and the kids were staying 3-4 days a week with me.

A month of that shit is more than double my mortgage payment, what the hell!!!

Was supposed to be “rehabilitation alimony ” for a bachelor’s degree. Never happened Judge couldn’t care less.

Agree. But I firmly believe a baby belongs with her mother unless the mother is completely unfit to the point of neglect or abuse.

That’s because you’re a sexist. Stop trying to walk back your earlier statement.

It is implied that this is not one of those situations. From all we know, Blair Pettry is a loving mother with no legal, drug or psychiatric problems. She has contributed to this website outlining her pregnancy situation with immense transparency.

The only thing worse than a loving Father not being able to get his kids away from a disastrous Mom is a Douche bag like that playing money games with the Mother. I would say she should threaten to expose the family as jackasses for leverage but the whole South East is probably aware.

Here are a few countries that will protect you and your baby: http://www.dailyfinance.com/2013/06/11/best-countries-no-extradition-edward-snowden-prism-nsa/#!fullscreen&slide=976329

If you stay in the USA, you not only will end up losing your baby you will also end up broke

No way she loses custody.

But 70% chance he gets nailed for outstanding child support. Big time. And his Dad is the Comptroller?

“Counseling those seeking to suck a government tit.”

Gee Whiz! Spelling errors must be the top priority today…

Daddy’s CDV record has been expunged. In the eyes of justice he is as pure as a Christmas Eve snow storm

Odds are the Daddy doesn’t want the baby. Either he wants to piss on/off baby’s mommy or perhaps Grandpa’s new squeeze has the urge to be a mommy again

You’re on. Men only get joint custody in 30% of cases. No Yankee court is going to give rubes from South Carolina anything. Eckstorm’s record may have been “expunged” but the events are common knowledge and the judge would have to be a fool not to at least be aware of them.

I think it is a coin toss based on the (alleged) corruption.

“Daddy’s CDV record has been expunged. In the eyes of justice he is as pure as a Christmas Eve snow storm”

That would be a shame if it couldn’t be introduced in a custoday hearing.

Sounds like he is a threat to children (CDV charge). No judge in their right mind would ever grant him custody. He might bear or even kill the kid.

Don’t worry flip, pogo, Tango or j.smith. You can comment without fear. Ekstrom’s job title “Comp-troller” has nothing to do with your comments on fits.

Having Eckstrom DNA should disqualify one from being within 100 feet of children, weak minded females, blind males or tethered donkeys.

Considering the trash his father goes after–Kelly Payne–I’m not surprised by any of this at all.

I have a friend who is famous for saying that it costs less to keep your dick in your pants. Unfortunately, he never met a vacuum cleaner he didn’t like.

I just want to say that I know Blair Pettry and she is a very loving and giving person, as well as a great mom. Never once has she said a bad word against this man, even when bad things were happening. To see this is very sad to me but the Blair Pettry I know has busted her bum and sacrificed to be and continue to be a great mother and role model for this child. A child is not a possession and isn’t someone’s for the taking. A child needs the love and support of both mom and dad. Hopefully this will be the case and everyone can come to some type of peaceful resolution.

I believe that Blair is a loving and giving person. She is a good mother, however, her bad online behavior can’t be denied. Blair has trashed Brad and Richard Eckstrom on multiple occasions. The digital footprint is there.

Had Blair not repeatedly cyber-trashed the family, perhaps she wouldn’t have sparked their ire.

It’s unfathomable the Eckstroms are using this innocent child as a pawn. The little girl belongs with her mother.